He 'teaches in a fun way' at Pattengill 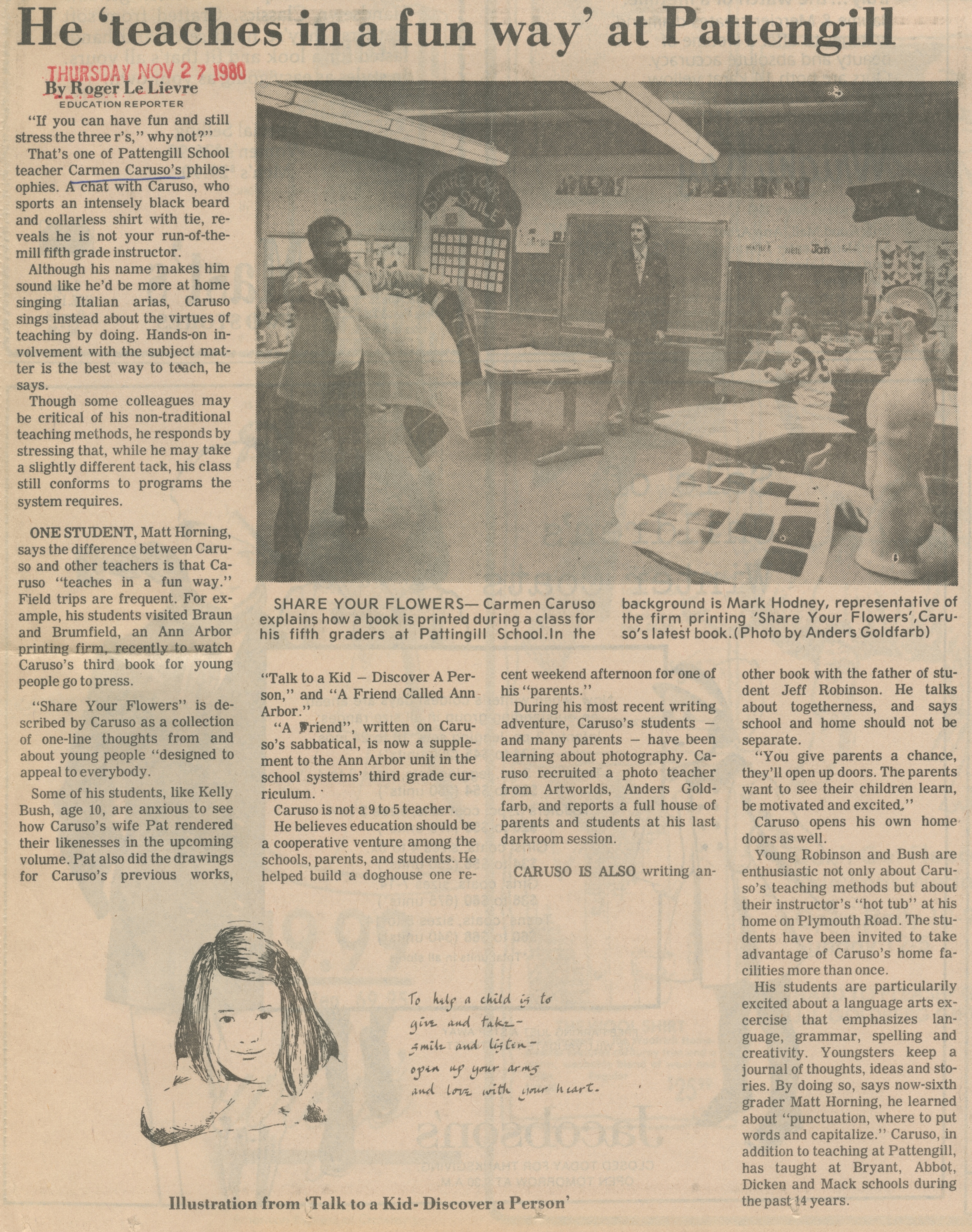 ﻿He ‘teaches in a fun way’ at Pattengill

“If you can have fun and still stress the three r’s,” why not?”

That’s one of Pattengill School teacher Carmen Caruso’s philosophies. A chat with Caruso, who sports an intensely black beard and collarless shirt with tie, reveals he is not your run-of-the-mill fifth grade instructor.

Although his name makes him sound like he’d be more at home singing Italian arias, Caruso sings instead about the virtues of teaching by doing. Hands-on involvement with the subject matter is the best way to touch, he says.

Though some colleagues may be critical of his non-traditional teaching methods, he responds by stressing that, while he may take a slightly different tack, his class still conforms to programs the system requires.

ONE STUDENT, Matt Horning, says the difference between Caruso and other teachers is that Caruso “teaches in a fun way.” Field trips are frequent. For example, his students visited Braun and Brumfield, an Ann Arbor printing firm, recently ta watch Caruso’s third book for young people go to press.

“Share Your Flowers” is described by Caruso as a collection of one-line thoughts from and about young people “designed to appeal to everybody.

Some of his students, like Kelly Bush, age 10, are anxious to see how Caruso’s wife Pat rendered their likenesses in the upcoming volume. Pat also did the drawings for Caruso’s previous works, “Talk to a Kid - Discover A Person,” and “A Friend Called Ann Arbor.”

“A Friend”, written on Caruso’s sabbatical, is now a supplement to the Ann Arbor unit in the school systems’ third grade curriculum. ’

He believes education should be a cooperative venture among the schools, parents, and students. He helped build a doghouse one recent weekend afternoon for one of his “parents.”

During his most recent writing adventure, Caruso’s students -and many parents - have been learning about photography. Caruso recruited a photo teacher from Artworlds, Anders Goldfarb, and reports a full house of parents and students at his last darkroom session.

CARUSO IS ALSO writing another book with the father of student Jeff Robinson. He talks about togetherness, and says school and home should not be separate.

“You give parents a chance, they’ll open up doors. The parents want to see their children learn, be motivated and excited,”

Caruso opens his own home doors as well.

Young Robinson and Bush are enthusiastic not only about Caruso’s teaching methods but about their instructor’s “hot tub” at his home on Plymouth Road. The students have been invited to take advantage of Caruso’s home facilities more than once.

His students are particularly excited about a language arts exercise that emphasizes language, grammar, spelling and creativity. Youngsters keep a journal of thoughts, ideas and stories. By doing so, says now-sixth grader Matt Horning, he learned about “punctuation, where to put words and capitalize.” Caruso, in addition to teaching at Pattengill, has taught at Bryant, Abbot, Dicken and Mack schools during the past 14 years.

SHARE YOUR FLOWERS—Carmen Caruso explains how a book is printed during a class for his fifth graders at Pattingill School.In the