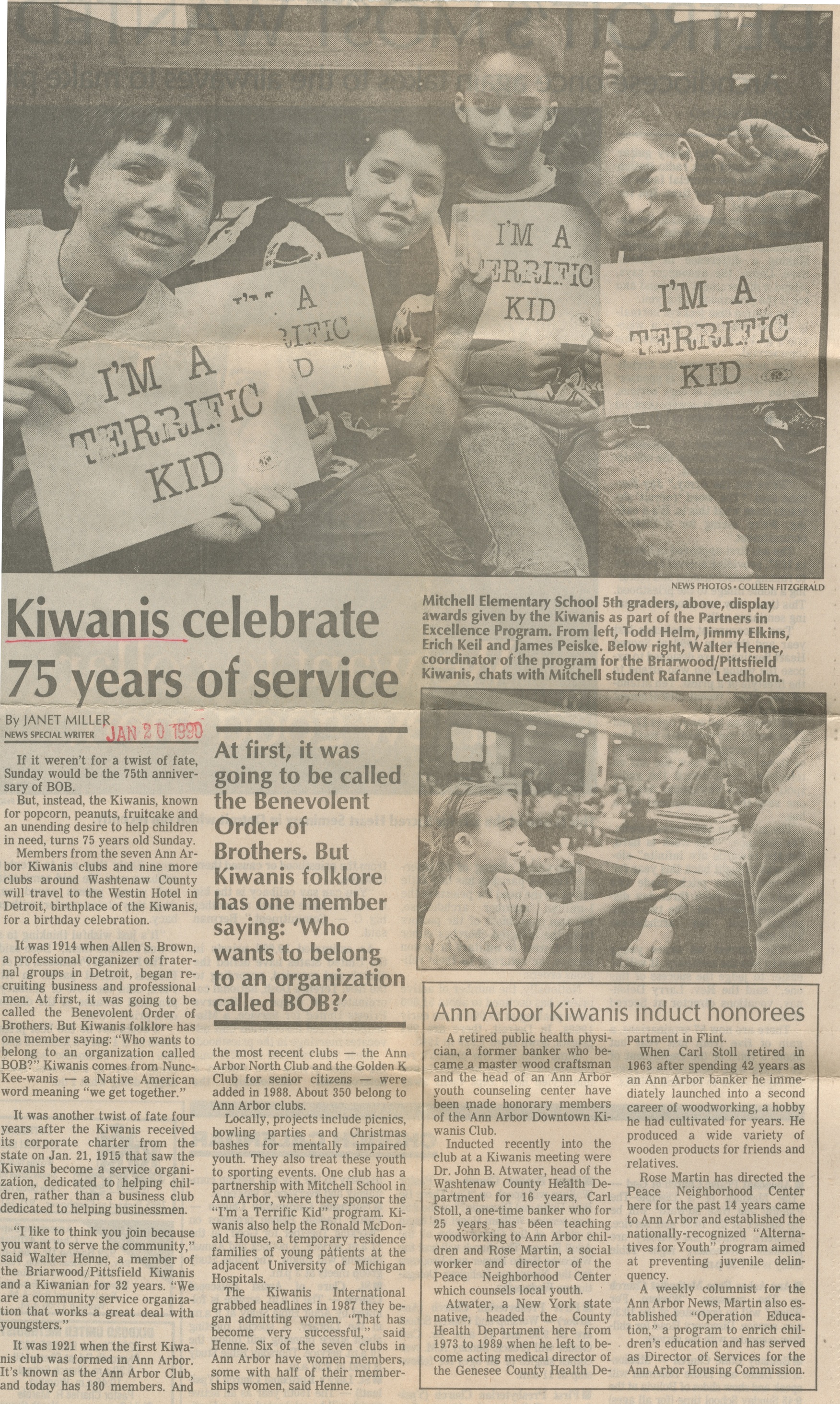 ﻿If it weren't for a twist of fate, Sunday would be the 75th anniversary of BOB.

But, instead, the Kiwanis, known for popcorn, peanuts, fruitcake and an unending desire to help children in need, turns 75 years old Sunday.

Members from the seven Ann Arbor Kiwanis clubs and nine more clubs around Washtenaw County will travel to the Westin Hotel in Detroit, birthplace of the Kiwanis, for a birthday celebration.

It was 1914 when Allen S Brown, a professional organizer of fraternal groups in Detroit, began recruiting business and professional men. At first, it was going to be called the Benevolent Order of Brothers. But Kiwanis folklore has one member saying: "Who wants to belong to an organization called BOB?" Kiwanis comes from Nunc-Kee-wanis -- a Native American word meaning "we get together."

"I like to think you join because you want to serve the community," said Walter Henne, a member of the Briarwood/Pittsfield Kiwanis and a Kiwanian for 32 years. "We are a community service organization that works a great deal with youngsters."

It was 1921 when the first Kiwanis club was formed in Ann Arbor. It's known as the Ann Arbor Club, and today has 180 members. And the most recent clubs -- the Ann Arbor North Club and the Golden K Club for senior citizens -- were added in 1988. About 350 belong to Ann Arbor clubs.

Locally, projects include picnics, bowling parties and Christmas bashes for mentally impaired youth. They also treat these youth to sporting events. One club as a partnership with Mitchell School in Ann Arbor, there they sponsor the "I'm a Terrific Kid" program. Kiwanis also help the Ronald McDonald House, a temporary residence families of young patients at the adjacent University of Michigan Hospitals.

The Kiwanis International grabbed headlines in 1987 they began admitting women. "that has become very successful," said Henne. Six of the seven clubs in Ann Arbor have women members, some with half of their memberships women, said Henne.

A retired public health physician, a former banker who became a master wood craftsman and the head of an Ann Arbor youth counseling center have been made honorary members of the Ann Arbor Downtown Kiwanis club.

Inducted recently into the club at a Kiwanis meeting were Dr. John B. Atwater, head of the Washtenaw County Health Department for 16 years, Carl Stoll, a one-time banker who for 25 years has been teaching woodworking to Ann Arbor children and Rose Martin, a social worker and director of the Peace Neighborhood Center which counsels local youth.

When Carl Stoll retired in 1963 after spending 42 years as an Ann Arbor banker he immediately launched into a second career of woodworking, a hobby he has cultivated for years. He produced a wide variety of wooden products for friends and relatives.

rose Martin has directed the Peace Neighborhood Center here for the past 14 years came to Ann Arbor and established the nationally-recognized "Alternatives for Youth" program aimed at preventing juvenile delinquency.