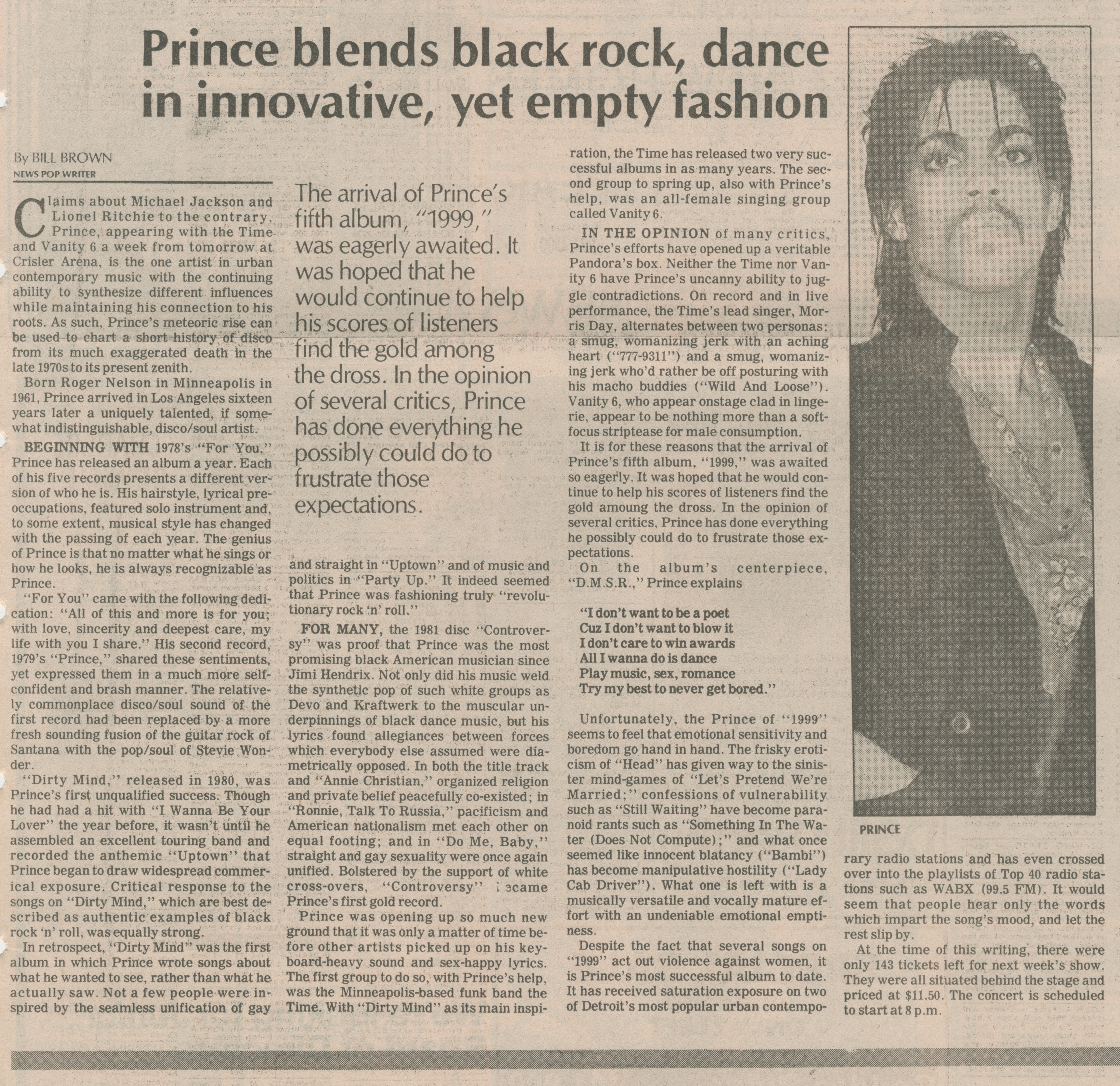 The arrival of Prince's fifth album, "1999," was eagerly awaited. It was hoped that he would continue to help his scores of listeners find the gold among the dross. In the opinion of several critics, Prince has done everything he possibly could do to frustrate those expectations.

Claims about Michael Jackson and Lionel Ritchie to the contrary. Prince, appearing with the Time and Vanity 6 a week from tomorrow at Crisler Arena, is the one artist in urban contemporary music with the continuing ability to synthesize different influences while maintaining his connection to his roots. As such. Prince’s meteoric rise can be used to ehart a short history of disco from its much exaggerated death in the late 1970s to its present zenith.

BEGINNING WITH 1978’s “For You,” Prince has released an album a year. Each of his five records presents a different version of who he is. His hairstyle, lyrical preoccupations, featured solo instrument and, to some extent, musical style has changed with the passing of each year. The genius of Prince is that no matter what he sings or how he looks, he is always recognizable as Prince.

“For You” came with the following dedication: “All of this and more is for you; with love, sincerity and deepest care, my life with you I share.” His second record, 1979’s “Prince,” shared these sentiments, yet expressed them in a much more self-confident and brash manner. The relatively commonplace disco/soul sound of the first record had been replaced by a more fresh sounding fusion of the guitar rock of Santana with the pop/soul of Stevie Wonder.

“Dirty Mind,” released in 1980, was Prince’s first unqualified success. Though he had had a hit with “I Wanna Be Your Lover” the year before, it wasn’t until he assembled an excellent touring band and recorded the anthemic “Uptown” that Prince began to draw widespread commercial exposure. Critical response to the songs on “Dirty Mind,” which are best described as authentic examples of black rock ‘n’ roll, was equally strong.

In retrospect, “Dirty Mind” was the first album in which Prince wrote songs about what he wanted to see, rather than what he actually saw. Not a few people were inspired by the seamless unification of gay

and straight in “Uptown” and of music and politics in “Party Up.” It indeed seemed that Prince was fashioning truly “revolutionary rock ‘n’roll.”

FOR MANY, the 1981 disc “Controversy” was proof that Prince was the most promising black American musician since Jimi Hendrix. Not only did his music weld the synthetic pop of such white groups as Devo and Kraftwerk to the muscular underpinnings of black dance music, but his lyrics found allegiances between forces which everybody else assumed were diametrically opposed. In both the title track and “Annie Christian.” organized religion and private belief peacefully co-existed; in “Ronnie, Talk To Russia,” pacificism and American nationalism met each other on equal footing; and in “Do Me, Baby,” straight and gay sexuality were once again unified. Bolstered by the support of white cross-overs, “Controversy” came Prince’s first gold record.

Prince was opening up so much new ground that it was only a matter of time before other artists picked up on his keyboard-heavy sound and sex-happy lyrics. The first group to do so, with Prince’s help, was the Minneapolis-based funk band the Time. With “Dirty Mind” as its main inspi-

ration, the Time has released two very successful albums in as many years. The second group to spring up, also with Prince’s help, was an all-female singing group called Vanity 6.

IN THE OPINION of many critics, Prince’s efforts have opened up a veritable Pandora’s box. Neither the Time nor Vanity 6 have Prince’s uncanny ability to juggle contradictions. On record and in live performance, the Time’s lead singer, Morris Day, alternates between two personas: a smug, womanizing jerk with an aching heart (“777-9311”) and a smug, womanizing jerk who’d rather be off posturing with his macho buddies (“Wild And Loose”). Vanity 6, who appear onstage clad in lingerie. appear to be nothing more than a soft-focus striptease for male consumption.

It is for these reasons that the arrival of Prince’s fifth album, “1999,” was awaited so eagerly. It was hoped that he would continue to help his scores of listeners find the gold among the dross. In the opinion of several critics. Prince has done everything he possibly could do to frustrate those expectations.

Unfortunately, the Prince of “1999” seems to feel that emotional sensitivity and boredom go hand in hand. The frisky eroticism of “Head” has given way to the sinister mind-games of “Let’s Pretend We’re Married;” confessions of vulnerability such as “Still Waiting” have become paranoid rants such as “Something In The Water (Does Not Compute);” and what once seemed like innocent blatancy (“Bambi”) has become manipulative hostility (“Lady Cab Driver”). What one is left with is a musically versatile and vocally mature effort with an undeniable emotional emptiness.

Despite the fact that several songs on “1999” act out violence against women, it is Prince’s most successful album to date. It has received saturation exposure on two of Detroit’s most popular urban contempo-

rary radio stations and has even crossed over into the playlists of Top 40 radio stations such as WABX (99.5 FM). It would seem that people hear only the words which impart the song’s mood, and let the rest slip by.

At the time of this writing, there were only 143 tickets left for next week’s show. They were all situated behind the stage and priced at $11.50. The concert is scheduled to start at 8p.m.