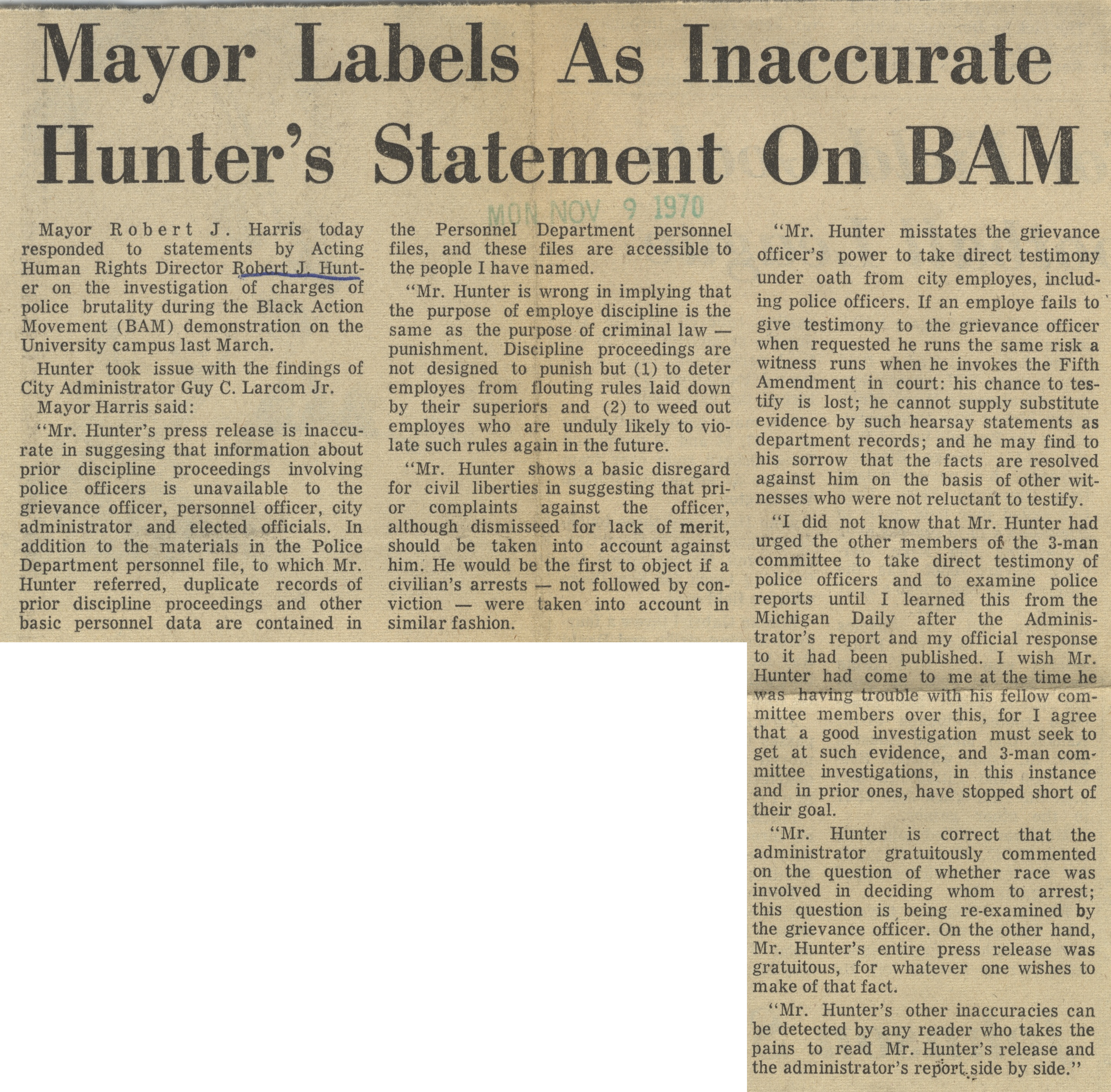 "Mr. Hunter’s press release is inaccurate in suggesing that information about prior discipline proceedings involving police officers is unavailable to the grievance officer, personnel officer, city administrator and elected officials. In addition to the materials in the Police Department personnel file, to which Mr. Hunter referred, duplicate records of prior discipline proceedings and other basic personnel data are contained in

the Personnel Department personnel files, and these files are accessible to the people I have named.

“Mr. Hunter is wrong in implying that the purpose of employe discipline is the same as the purpose of criminal law — punishment. Discipline proceedings are not designed to punish but (1) to deter employes from flouting rules laid down by their superiors and (2) to weed out employes who are unduly likely to violate such rules again in the future.

“Mr. Hunter shows a basic disregard for civil liberties in suggesting that prior complaints against the officer, although dismisseed for lack of merit, should be taken into account against him. He would be the first to object if a civilian’s arrests — not followed by conviction — were taken into account in similar fashion.

“Mr. Hunter misstates the grievance officer’s power to take direct testimony under oath from city employes, including police officers. If an employe fails to give testimony to the grievance officer when requested he runs the same risk a witness runs when he invokes the Fifth Amendment in court: his chance to testify is lost; he cannot supply substitute evidence by such hearsay statements as department records; and he may find to his sorrow that the facts are resolved against him on the basis of other witnesses who were not reluctant to testify.

“I did not know that Mr. Hunter had urged the other members of the 3-man committee to take direct testimony of police officers and to examine police reports until I learned this from the Michigan Daily after the Administrator’s report and my official response to it had been published. I wish Mr. Hunter had come to me at the time he was having trouble with his fellow committee members over this, for I agree that a good investigation must seek to get at such evidence, and 3-man committee investigations, in this instance and in prior ones, have stopped short of their goal.

“Mr. Hunter is correct that the administrator gratuitously commented on the question of whether race was involved in deciding whom to arrest; this question is. being re-examined by the grievance officer. On the other hand, Mr. Hunter’s entire press release was gratuitous, for whatever one wishes to make of that fact.

“Mr. Hunter’s other inaccuracies can be detected by any reader who takes the pains to read Mr. Hunter’s release and the administrator’s report side by side.”