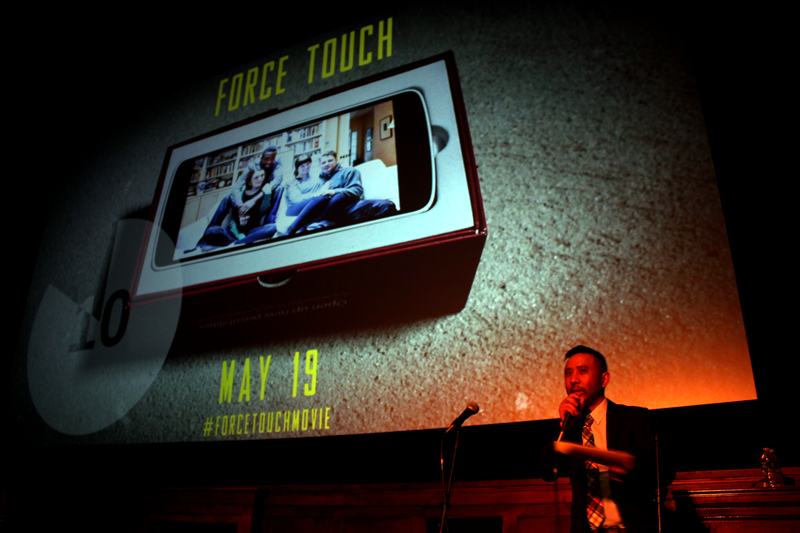 Writer/director Rik Cordero gives the intro at the world premiere of Force Touch at the Michigan Theater on Thursday, May 19th.

When Rik Cordero, a talented young filmmaker with a passion for science fiction, had the inspiration to work with a local teen center on a creative, collaborative project, their combined talent and drive to create made the possibilities virtually endless. Yet of all the vast realms and universes out there to explore, they wondered what would happen if they decided to venture into the most volatile and dangerous of all—the human psyche?

With acute insight into the effects of modern technology on human relations and a Black Mirror twist on a beloved Twilight Zone tale, writer/director Rik Cordero and the digital dream-weavers over at the Neutral Zone set about telling a story that would resonate with viewers—a story marked by that humbling moment when the whirlwind dreams of our early-20s must reconcile with the kind of reality that doesn't make ratings. The result was Force Touch, which had it's world premiere at the Michigan Theater on Thursday, May 19th. An emotionally-charged, fifteen-minute short, Force Touch centers on a group of young friends whose fates are sealed after they discover a cell phone with a camera that takes pictures of events just before they really happen.

By day the Senior Media Producer at Duo Security, Cordero already had an impressive filmography when he departed his native Queens for the greener pastures—literally and figuratively—of Tree Town:

"My wife Nancy (Executive Producer of the film) and I, moved from New York City to Ann Arbor last July. We shot a ton of music videos and commercials during our time there but the work life balance sucked. Once we moved, the creative quality of our lives improved almost immediately through meeting many diverse folks with common interests."

"With more time to focus on storytelling, I came up with the idea of Force Touch and my goal was to capture elements of the college culture here from an outsider's point of view. I'm a college football fan but maybe not to the degree as some of my friends who have lived here their entire lives so I wanted to explore those emotions and how they would bounce off the characters in the story. Also Ann Arbor was a new canvas for me to employ a layer of sci-fi and technology which is another passion of mine."

It was Duo Security owner Dug Song and his wife Linh who introduced Cordero to Neutral Zone Executive Director Lori Roddy and Community Relations Director Mary Moffett. Later, after touring the facility, the filmmaker hatched a plan to write and direct a short to be produced by the Neutral Zone in collaboration with Alysha Schlundt-Bodien, Facility and Training Coordinator at CTN in Ann Arbor.

Tasked with supervising the teens during the shoot, Schlundt-Bodien was thrilled to witness firsthand how valuable the experience was for the teens: "I asked one of the Neutral Zone teens to talk about his experience to the VP group, and he said that he learned so much from the production. He learned that it takes way more time to set everything up than he thought it did—from the lighting to the staging—and how important it is to be organized. He also said it would be great to help out with something like this again."

Of course every independent film is a struggle, and though a major snowstorm on the first day of shooting set the tone of the turbulent production, the teenage crew weathered on, gaining valuable experience about the importance of persevering amidst unexpected set-backs. Despite even the most meticulous planning, any number of things can go wrong on a movie shoot at the last second, making a filmmaker's ability to improvise under challenging circumstances a critical component of success.

Meanwhile, on the other side of the camera, you'll find a talented selection of actors thst Cordero and his wife/filmmaking partner, Nancy, became acquainted with during last year's YPSI 24 Hour Shootout, which challenges independent filmmakers to produce an engaging short in a single day.

But the fortuitous connection to local talent was just one of the perks of participation; in Cordero's words, "There's a special sense of camaraderie and collaboration here that's been missing for awhile in New York City. It's easy to stay busy in NYC but most video creatives including myself were often stuck hustling multiple gigs just to pay the bills. There's a better work life balance here that's very refreshing and reminds me about why I got into this business in the first place—to share stories and stay inspired."

And inspiration was exactly what Cordero intended to do by showcasing Force Touch, along with a specially-curated selection of other locally-produced shorts, on Thursday, May 19th at the historic Michigan Theater. During the lively question and answer session that followed the sold-out screening, Cordero voiced hope that the event could act as a sort-of catalyst of creativity among local media artists. Judging by the stellar turnout, he may be onto something, too; the Michigan Theater's Screening Room was buzzing with excitement as the cast and crew fielded questions from the audience before raffling off prizes that included enough filmmaking gear to make any aspiring Scorsese salivate. 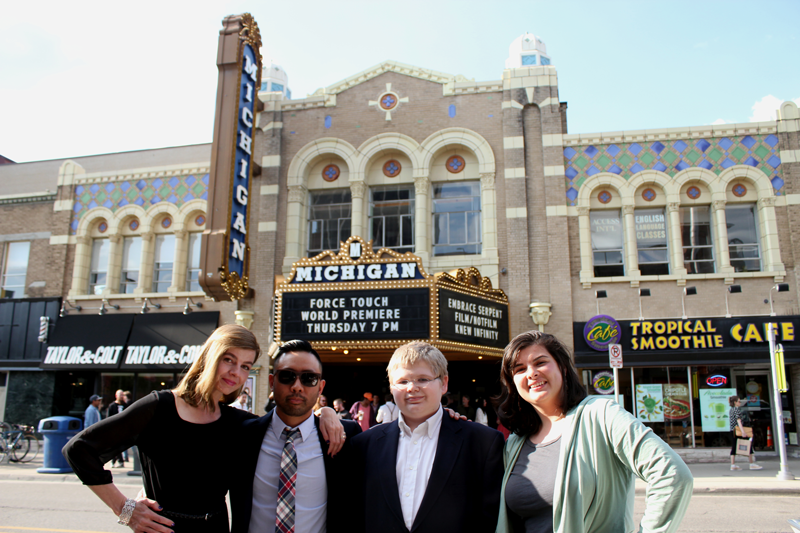 Nancy Mitchell, Rik Cordero, Adam Ruff, and Alysha Schlundt-Bodien at the sold out premiere at the Michigan Theater.

Highlights of that session included the revelation that the story was originally set to take place during football season, but that the plan was scrapped due to the aforementioned snowstorm (the actual film production only lasted a couple of days), and that the idea to offer a twist on the original Rod Serling tale from the Twilight Zone episode "A Most Unusual Camera," came after reading a news article about a prototype iPhone accidentally left at a bar by a careless member of the development team. That story, combined with Cordero's fascination with "things we don't see that can control our lives," such as complex social media algorithms with the potential to alter real-life relationships, served as the pillars of Force Touch's plot.

Near the end of the question and answer session, Cordero, visibly moved while addressing the packed auditorium, hinted that this event could be the first in a series aimed at showcasing local films and filmmakers. It's a noble goal that, judging by the "Sold Out" sign at the box office, is well within reach.

But that's the future. As for the present, the seeds of creativity definitely appear to have taken root. Asked about his experiences working as a production assistant on Force Touch, Neutral Zone teen Adam Ruff exclaimed, "I definitely want to move forward in filmmaking, although I don't know in what capacity just yet."

With events like this premiere and the YPSI 24 Hour Shootout, as well as the abundance of creative programs offered by the Neutral Zone, Ruff will no doubt have an abundance of opportunities to stay inspired and grow his talents. You don't need a camera that can see into the future to be certain of that.

Jason Buchanan is a writer living in Ann Arbor.