Mr. Flood's Party: A Bar With An Unusual Flavor 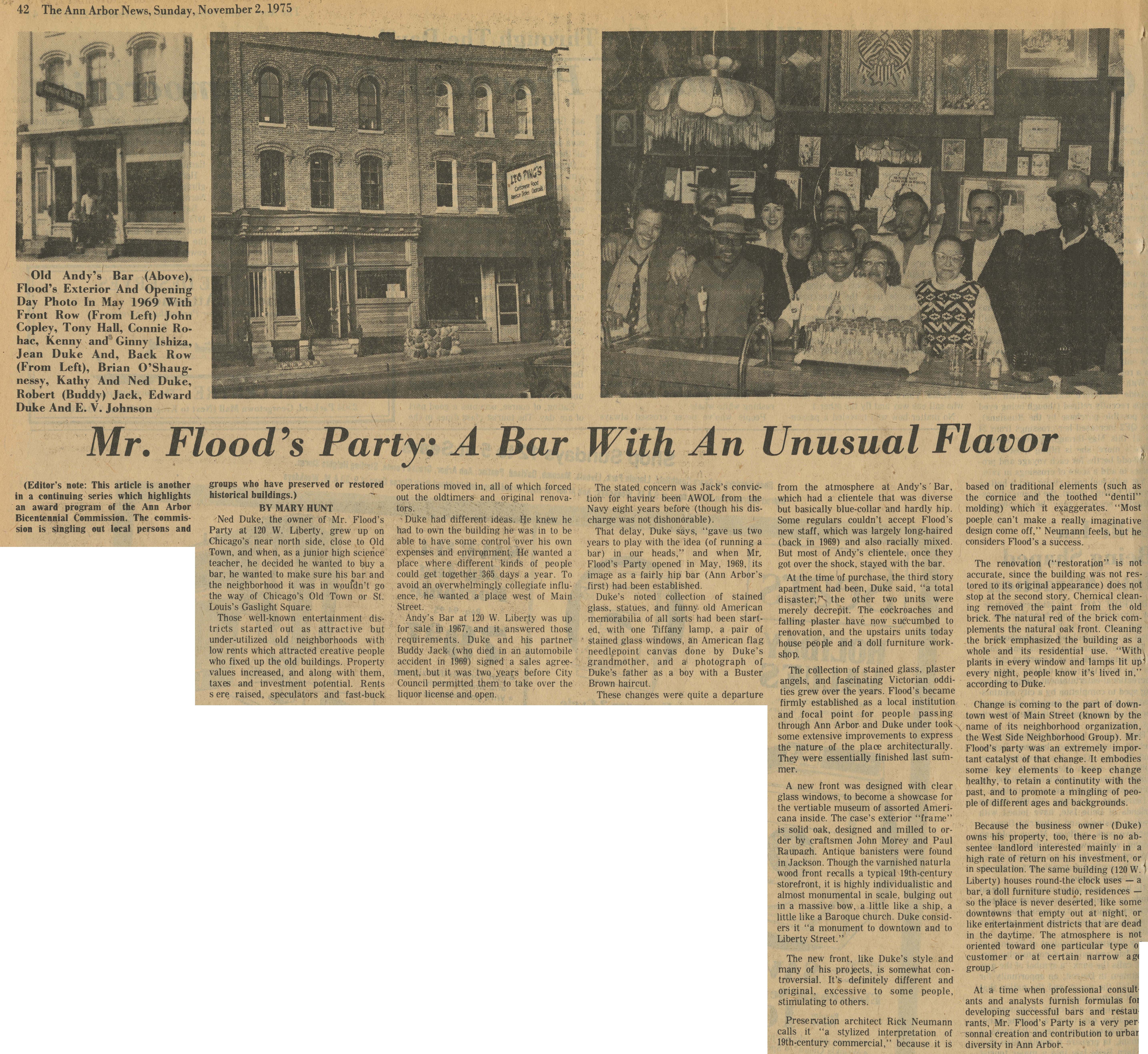 Mr. Flood’s Party: A Bar With An Unusual Flavor

(Editor’s note: This article is another in a continuing series which highlights an award program of the Ann Arbor Bicentennial Commission. The commission is singling out local persons and groups who have preserved or restored historical buildings.)

Ned Duke, the owner of Mr. Flood's Party at 120 W. Liberty, grew up on Chicago’s near north side, close to Old Town, and when, as a junior high science teacher, he decided he wanted to buy a bar, he wanted to make sure his bar and the neighborhood it was in wouldn't go the way of Chicago’s Old Town or St. Louis’s Gaslight Square.

Those well-known entertainment districts started out as attractive but under-utilized old neighborhoods with low rents which attracted creative people who fixed up the old buildings. Property values increased, and along with them, taxes and investment potential. Rents were raised, speculators and fast-buck operations moved in, all of which forced out the old-timers and original renovators.

Duke had different ideas. He knew he had to own the building he was in to be able to have some control over his own expenses and environment. He wanted a place where different kinds of people could get together 365 days a year. To avoid an overwhelmingly collegiate influence, he wanted a place west of Main Street.

Andy’s Bar at 120 W. Liberty was up for sale in 1967, and it answered those requirements. Duke and his partner Buddy Jack (who died in an automobile accident in 1969) signed a sales agreement, but it was two years before City Council permitted them to take over the liquor license and open.

The stated concern was Jack’s conviction for having been AWOL from the Navy eight years before (though his discharge was not dishonorable).

That delay, Duke says, “gave us two years to play with the idea (of running a bar) in our heads," and when Mr. Flood's Party opened in May, 1969, its image as a fairly hip bar (Ann Arbor’s first) had been established.

Duke's noted collection of stained glass, statues, and funny old American memorabilia of all sorts had been started, with one Tiffany lamp, a pair of stained glass windows, an American flag needlepoint canvas done by Duke’s grandmother, and a photograph of Duke's father as a boy with a Buster Brown haircut.

These changes were quite a departure from the atmosphere at Andy’s' Bar, which had a clientele that was diverse but basically blue-collar and hardly hip. Some regulars couldn’t accept Flood’s new staff, which was largely long-haired (back in 1969) and also racially mixed. But most of Andy’s clientele, once they got over the shock, stayed with the bar.

At the time of purchase, the third story apartment had been, Duke said, “a total disaster; the other two units were merely decrepit. The cockroaches and falling plaster have now succumbed to renovation, and the upstairs units today house people and a doll furniture workshop.

The collection of stained glass, plaster angels, and fascinating Victorian oddities grew over the years. Flood’s became firmly established as a local institution and focal point for people passing through Ann Arbor and Duke under took some extensive improvements to express the nature of the place architecturally. They were essentially finished last summer.

A new front was designed with clear glass windows, to become a showcase for the veritable museum of assorted Americana inside. The case’s exterior “frame” is solid oak, designed and milled to order by craftsmen John Morey and Paul Raupagh. Antique banisters were found in Jackson. Though the varnished natural wood front recalls a typical 19th-century storefront, it is highly individualistic and almost monumental in scale, bulging out in a massive bow, a little like a ship, a little like a Baroque church. Duke considers it “a monument to downtown and to Liberty Street.”

The new front, like Duke’s style and many of his projects, is somewhat controversial. It’s definitely different and original, excessive to some people, stimulating to others.

Preservation architect Rick Neumann calls it “a stylized interpretation of 19th-century commercial,” because it is
based on traditional elements (such as the cornice and the toothed “dentil" molding) which it exaggerates. “Most people can’t make a really imaginative design come off," Neumann feels, but he considers Flood’s a success.

The renovation (“restoration” is not accurate, since the building was not restored to its original appearance) does not stop at the second story. Chemical cleaning removed the paint from the old brick. The natural red of the brick complements the natural oak front. Cleaning the brick emphasized the building as a whole and its residential use. “With plants in every window and lamps lit up every night, people know it’s lived in," according to Duke.

Change is coming to the part of downtown west of Main Street (known by the name of its neighborhood organization, the West Side Neighborhood Group). Mr. Flood’s party was an extremely important catalyst of that change. It embodies some key elements to keep change healthy, to retain a continuity with the past, and to promote a mingling of people of different ages and backgrounds.

Because the business owner (Duke) owns his property, too, there is no absentee landlord interested mainly in a high rate of return on his investment, or in speculation. The same building (120 W. Liberty) houses round-the clock uses — a bar, a doll furniture studio, residences — so the place is never deserted, like some downtowns that empty out at night, or like entertainment districts that are dead in the daytime. The atmosphere is not oriented toward one particular type of customer or a certain narrow age group.

At a time when professional consultants and analysts furnish formulas for developing successful bars and restaurants, Mr. Flood's Party is a very personal creation and contribution to urban diversity in Ann Arbor.