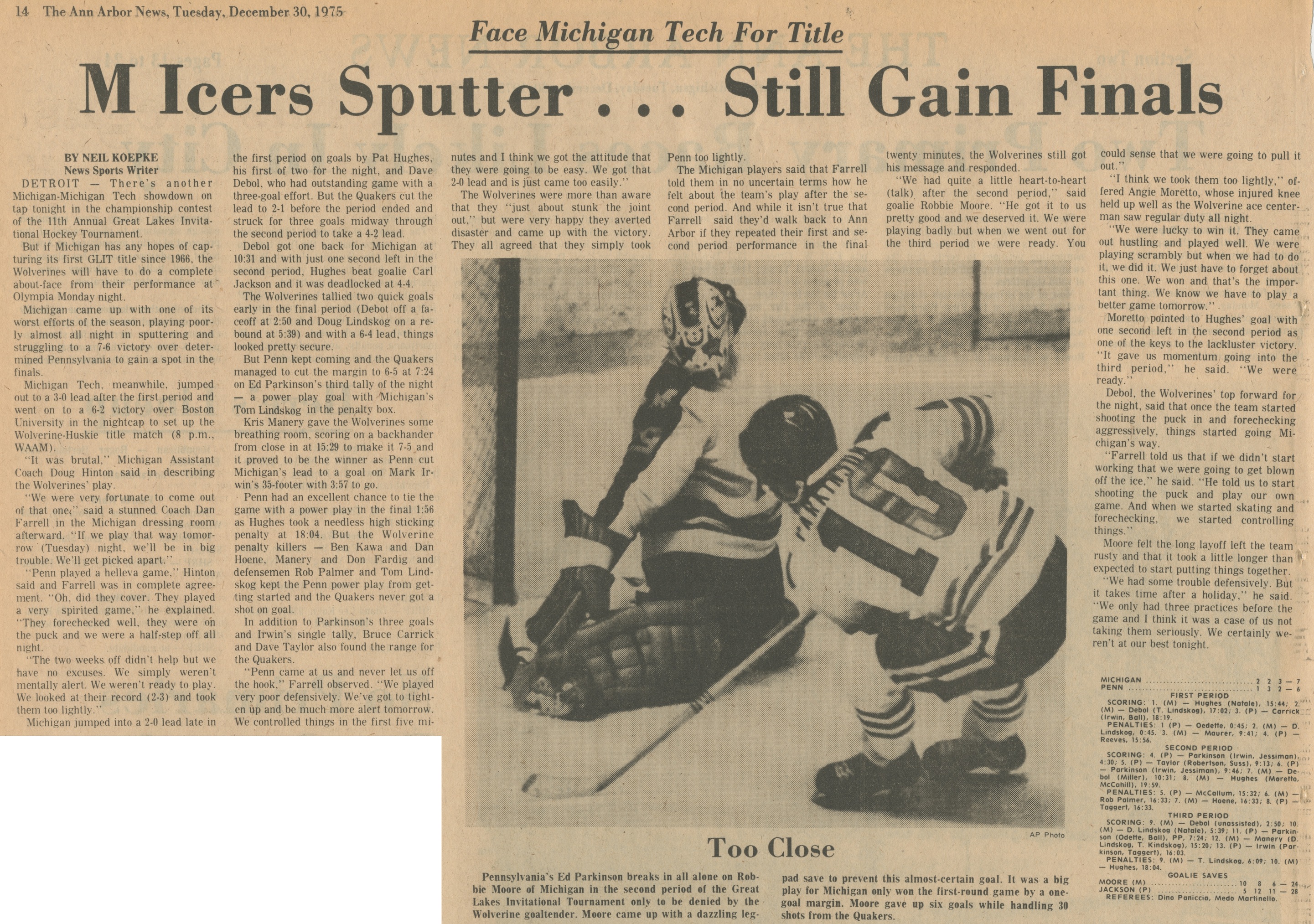 But if Michigan has any hopes of capturing its first GLIT title since 1966, the Wolverines will have to do a complete about-face from their performance at Olympia Monday night.

Michigan Tech. meanwhile, jumped out to a 3-0 lead after the first period and went on to a 6-2 victory over Bposton University in the nightcap to set up the Wolverine-Huskie title match (8 p.m., WAAM).

"We were very fortunate to come out of that one," said a stunned Coach Dan Farrell in the Michigan dressing room afterward. "If we play that way tomorrow (Tuesday) night, we'll be in big trouble. We'll get picked apart."

"Penn played a helleva game," Hinton said and Farrell was in complete agreement. "Oh, did they cover. They played a very spirited game," he explained. "They forechecked well, they were on the puck and we were a half-step off all night.

"The two weeks off didn't help but we have no excuses. We simply weren't mentally alert. We weren't ready to play. We looked at their record (2-3) and took them too lightly."

Michigan jumped into a 2-0 lead late in the first period on goals by Pat Hughes, his first of two for the night, and Dave Debol, who had outstanding game with a three-goal effort. But the Quakers cut the lead to 2-1 before the period ended and struck for three goals midway through the second period to take a 4-2 lead.

Debol got one back for Michigan at 10:31 and with just one second left in the second period, Hughes beat goalie Carl Jackson and it was deadlocked at 4-4.

The Wolverines tallied two quick goals early in the final period (Debol off a faceoff at 2:50 and Doug Lindskog on a rebound at 5:39) and with a 6-4 lead, things looked pretty secure.

But Penn kept coming and the Quakers managed to cut the margin to 6-5 at 7:24 on Ed Parkinson's third tally of the night -- a power play goal with Michigan's Tom Lindskog in the penalty box.

Kris Manery gave the Wolverines some breathing room, scoring on a backhander from close in at 15:29 to make it 7-5 and it proved to be the winner as Penn cut Michigan's lead to a goal on Mark Irwin's 35-footer with 3:57 to go.

Penn had an excellent chance to tie the game with a power play in the final 1:56 as Hughes took a needless high sticking penalty at 18:04. But the Wolverine penalty killers -- Ben Kawa and Dan Hoene, Manery and Don Fardig and defensemen Rob Palmer and Tom Lindskog kept the power play from getting started and the Quakers never got a shot on goal.

In addition to Parkinson's three goals and Irwin's single tally, Bruce Carrick and Dave Taylor also found the range for the Quakers.

"Penn came at us and never let us off the hook," Farrell observed. "We played very poor defensively. We've got to tighten up and be much more alert tomorrow. We controlled things in the first five minutes and I think we got the attitude that they were going to be easy. We got that 2-0 lead and it just came too easily."

The Wolverines were more than aware that they "just about stunk the joint out," but were very happy they averted disaster and came up with the victory. They all agreed that they simply took Penn too lightly.

The Michigan players said that Farrell told them in no uncertain terms how he felt about the team's play after the second period. And while it isn't true that Farrell said they'd walk back to Ann Arbor if they repeated their first and second period performance in the final twenty minutes, the Wolverines still got his message and responded.

"We had quite a little heart-to-heart (talk) after the second period," said goalie Robbie Moore. "He got it to us pretty good and we deserved it. We Were playing badly but when we went out for the third period we were ready. You could sense that we were going to pull it out."

"I think we took them too lightly," offered Angie Moretto, whose injured knee held up as well as the Wolverine ace centerman saw regular duty all night.

"We were lucky to win it. They came out hustling and played well. We were playing scrambly but when we had to do it, we did it. We just have to forget about this one. We won and that's the important thing. We know we have to play a better game tomorrow."

Moretto pointed to Hughes' goal with one second left in the second period as one of the keys to the lackluster victory. "It gave us momentum going into third period," he said. "We were ready."

Debol, the Wolverines' top forward for the night, said that once the team started shooting the puck in and forechecking aggressively, things started going Michigan's way.

"Farrell told us that if we didn't start working that we were going to get blown off the ice," he said. "He told us to start shooting the puck and play our own game. And when we started skating and forechecking, we started controlling things."

Moore felt the long layoff left the team rusty and that it took a little longer than expected to start putting things together.

"We had some trouble defensively. But it takes time after a holiday," he said. "We only had three practices before the game and I think it was a case of us not taking them seriously. We certainly weren't our best tonight.