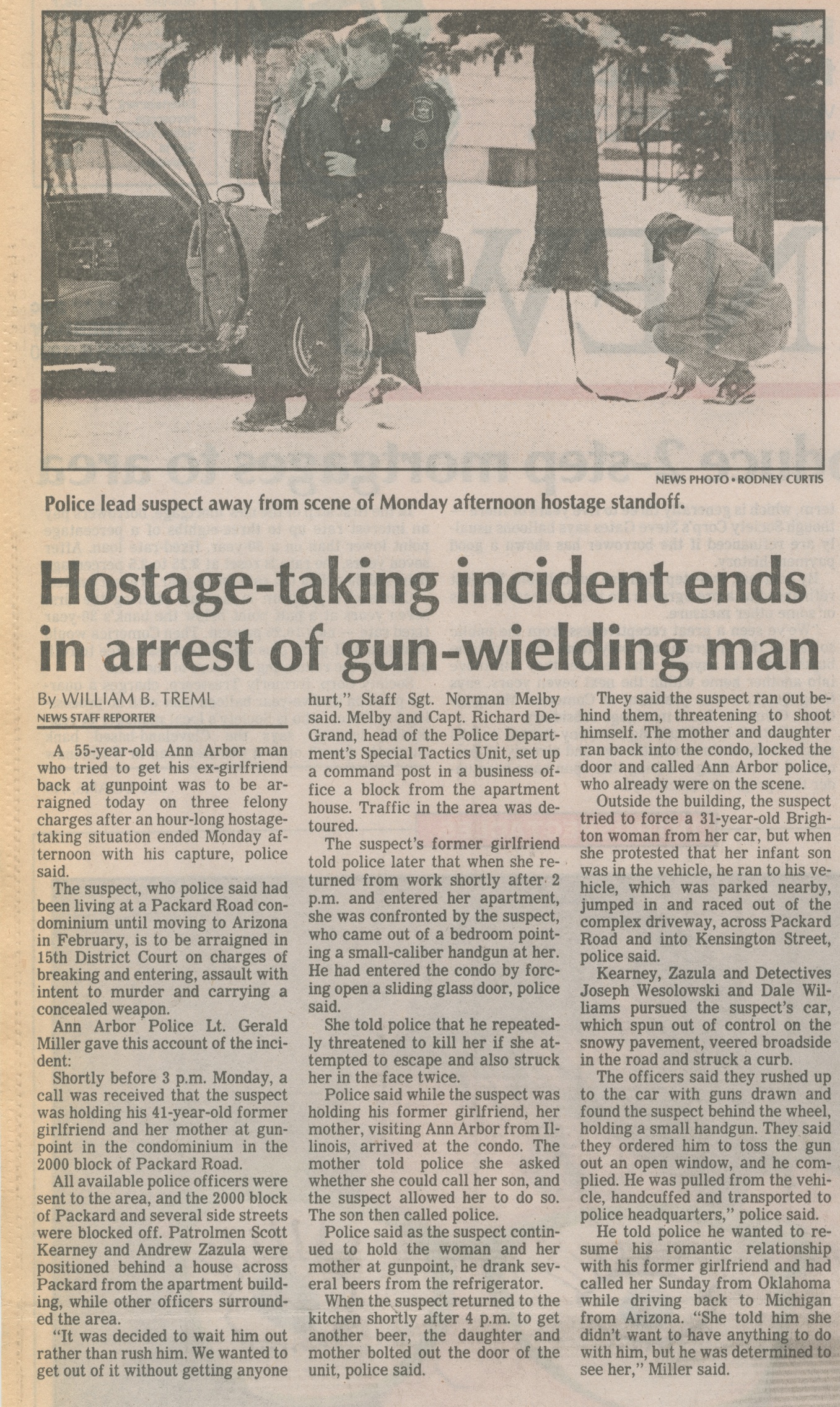 A 55-year-old Ann Arbor man who tried to get his ex-girlfriend back at gunpoint was to be arraigned today on three felony charges after an hour-long hostage-taking situation ended Monday afternoon with his capture, police said.

The suspect, who police said had been living at a Packard Road condominium until moving to Arizona in February, is to be arraigned in 15th District Court on charges of breaking and entering, assault with intent to murder and carrying a concealed weapon.

Shortly before 3 p.m. Monday, a call was received that the suspect was holding his 41-year-old former girlfriend and her mother at gunpoint in the condominium in the 2000 block of Packard Road.

All available police officers were sent to the area, and the 2000 block of Packard and several side streets were blocked off.  Patrolmen Scott Kearney and Andrew Zazula were positioned behind a house across Packard from the apartment building, while other officers surrounded the area.

"It was decided to wait him out rather than rush him.  We wanted to get out of it without getting anyone hurt," Staff Sgt. Norman Melby said.  Melby and Capt. Richard DeGrand, head of the Police Department's Special Tactics Unit, set up a command post in a business office a block from the apartment house. Traffic in the area was detoured.

The suspect's former girlfriend told police later that when she returned from work shortly after 2 p.m. and entered her apartment, she was confronted by the suspect, who came out of a bedroom pointing a small-caliber handgun at her.  He had entered the condo by forcing open a sliding glass door, police said.

She told police that he repeatedly threatened to kill her if she attempted to escape and also struck her in the face twice.

Police said while the suspect was holding his former girlfriend, her mother, visiting Ann Arbor from Illinois, arrived at the condo.  The mother told police she asked whether she could call her son, and the suspect allowed her to do so.  The son then called police.

Police said as the suspect continued to hold the woman and her mother at gunpoint, he drank several beers from the refrigerator.

When the suspect returned to the kitchen shortly after 4 p.m. to get another beer, the daughter and mother bolted out the door of the unit, police said.

They said the suspect ran out behind them, threatening to shoot himself.  The mother and daughter ran back into the condo, locked the door and called Ann Arbor Police, who already were on the scene.

Outside the building, the suspect tried to force a 31-year-old Brighton woman from her car, but when she protested that her infant son was in the vehicle, he ran to his vehicle, which was parked nearby, jumped in and raced out of the complex driveway, across Packard Road and into Kensington Street, police said.

Kearney, Zazula and Detectives Joseph Wesolowski and Dale Williams pursued the suspect's car, which spun out of control on the snowy pavement, veered broadside in the road and struck a curb.

The officers said they rushed up to the car with guns drawn and found the suspect behind the wheel, holding a small handgun.  They said they ordered him to toss the gun out an open window, and he complied.  He was pulled from the vehicle, handcuffed and transported to police headquarters, police said.

He told police he wanted to resume his romantic relationship with his former girlfriend and had called her Sunday from Oklahoma while driving back to Michigan from Arizona.  "She told him she didn't want to have anything to do with him, but he was determined to see her," Miller said.