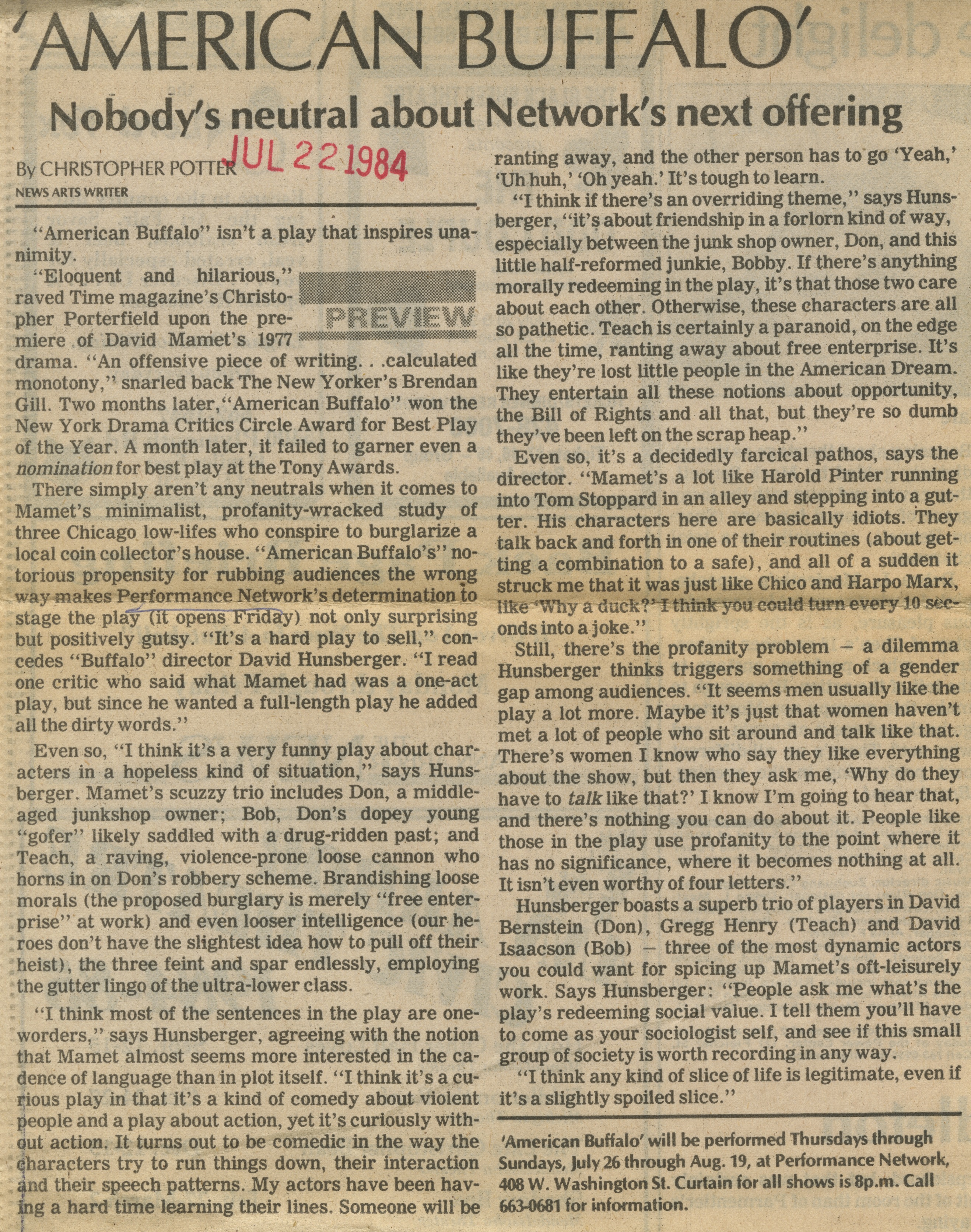 Nobody's neutral about Network's next offering

“Eloquent and hilarious" raved Time magazine's Christopher Porterfield upon the premiere of David Mamet’s 1977 drama. “An offensive piece of writing. . .calculated monotony,” snarled back The New Yorker’s Brendan Gill. Two months later, “American Buffalo” won the New York Drama Critics Circle Award for Best Play of the Year. A month later, it failed to garner even a nomination for best play at the Tony Awards.

There simply aren’t any neutrals when it comes to Mamet’s minimalist, profanity-wracked study of three Chicago low-lifes who conspire to burglarize a local coin collector’s house. “American Buffalo’s” notorious propensity for rubbing audiences the wrong way makes Performance Network’s determination to stage the play (it opens Friday) not only surprising but positively gutsy. “It’s a hard play to sell,” concedes “Buffalo” director David Hunsberger. “I read one critic who said what Mamet had was a one-act play, but since he wanted a full-length play he added all the dirty words.”

Even so, “I think it’s a very funny play about characters in a hopeless kind of situation,” says Hunsberger. Mamet’s scuzzy trio includes Don, a middle-aged junkshop owner; Bob, Don’s dopey young “gofer” likely saddled with a drug-ridden past; and Teach, a raving, violence-prone loose cannon who horns in on Don’s robbery scheme. Brandishing loose morals (the proposed burglary is merely “free enterprise” at work) and even looser intelligence (our heroes don’t have the slightest idea how to pull off their heist), the three feint and spar endlessly, employing the gutter lingo of the ultra-lower class.

“I think most of the sentences in the play are one-worders,” says Hunsberger, agreeing with the notion that Mamet almost seems more interested in the cadence of language than in plot itself. “I think it’s a curious play in that it’s a kind of comedy about violent people and a play about action, yet it’s curiously without action. It turns out to be comedic in the way the characters try to run things down, their interaction and their speech patterns. My actors have been having a hard time learning their lines. Someone will be ranting away, and the other person has to go ‘Yeah,’ ‘Uh huh,’ ‘Oh yeah.’ It’s tough to learn.

“I think if there’s an overriding theme,” says Hunsberger, “it’s about friendship in a forlorn kind of way, especially between the junk shop owner, Don, and this little half-reformed junkie, Bobby. If there’s anything morally redeeming in the play, it’s that those two care about each other. Otherwise, these characters are all so pathetic. Teach is certainly a paranoid, on the edge all the time, ranting away about free enterprise. It’s like they’re lost little people in the American Dream. They entertain all these notions about opportunity, the Bill of Rights and all that, but they’re so dumb they’ve been left on the scrap heap.”

Even so, it’s a decidedly farcical pathos, says the director. “Mamet’s a lot like Harold Pinter running into Tom Stoppard in an alley and stepping into a gutter. His characters here are basically idiots. They talk back and forth in one of their routines (about getting a combination to a safe), and all of a sudden it struck me that it was just like Chico and Harpo Marx, like 'Why a duck?’ I think you could turn every 10 seconds into a joke.”

Still, there’s the profanity problem -- a dilemma Hunsberger thinks triggers something of a gender gap among audiences. “It seems men usually like the play a lot more. Maybe it’s just that women haven’t met a lot of people who sit around and talk like that. There’s women I know who say they like everything about the show, but then they ask me, ‘Why do they have to talk like that?’ I know I’m going to hear that, and there’s nothing you can do about it. People like those in the play use profanity to the point where it has no significance, where it becomes nothing at all. It isn’t even worthy of four letters.”

Hunsberger boasts a superb trio of players in David Bernstein (Don), Gregg Henry (Teach) and David Isaacson (Bob) -- three of the most dynamic actors you could want for spicing up Mamet’s oft-leisurely work. Says Hunsberger: “People ask me what’s the play’s redeeming social value. I tell them you’ll have to come as your sociologist self, and see if this small group of society is worth recording in any way.

“I think any kind of slice of life is legitimate, even if it’s a slightly spoiled slice.”

‘American Buffalo' will be performed Thursdays through Sundays, July 26 through Aug. 19, at Performance Network, 408 W. Washington St. Curtain for all shows is 8p.m. Call 663-0681 for information.