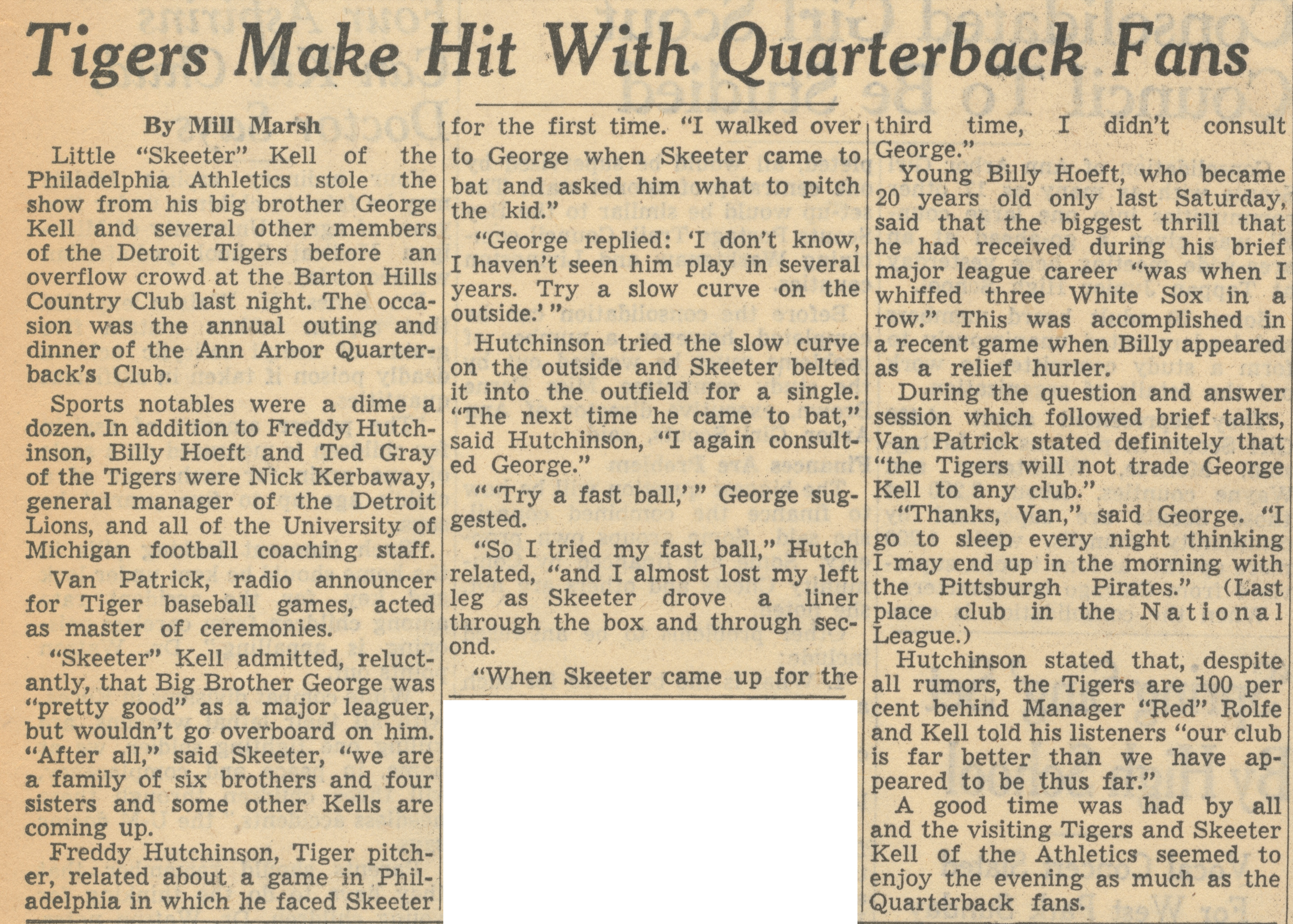 Little “Skeeter” Kell of the Philadelphia Athletics stole the show from his big brother George Kell and several other members of the Detroit Tigers before an overflow crowd at the Barton Hills Country Club last night. The occasion was the annual outing and dinner of the Ann Arbor Quarterback's Club.

Sports notables were a dime a dozen. In addition to Freddy Hutchinson, Billy Hoeft and Ted Gray of the Tigers were Nick Kerbaway, general manager of the Detroit Lions, and all of the University of Michigan football coaching staff.

"Skeeter” Kell admitted, reluctantly, that Big Brother George was "pretty good” as a major leaguer, but wouldn't go overboard on him. “After all,” said Skeeter, "we are a family of six brothers and four sisters and some other Kells are coming up.

Freddy Hutchinson, Tiger pitcher, related about a game in Philadelphia in which he faced Skeeter for the first time. "I walked over to George when Skeeter came to bat and asked him what to pitch the kid.”

"George replied: 'I don’t know, I haven't seen him play in several years. Try a slow curve on the outside.’ ”

Hutchinson tried the slow curve on the outside and Skeeter belted it into the outfield for a single. “The next time he came to bat,” said Hutchinson, “I again consulted George."

“So I tried my fast ball,” Hutch related, "and I almost lost my left leg as Skeeter drove a liner through the box and through second.

"When Skeeter came up for the third time, I didn’t consult George.”

Young Billy Hoeft, who became 20 years old only last Saturday, said that the biggest thrill that he had received during his brief major league career "was when I whiffed three White Sox in a row.” This was accomplished in a recent game when Billy appeared as a relief hurler.

During the question and answer session which followed brief talks, Van Patrick stated definitely that "the Tigers will not trade George Kell to any club.”

"Thanks, Van," said George. "I go to sleep every night thinking I may end up in the morning with the Pittsburgh Pirates.” (Last place club in the National League.)

Hutchinson stated that, despite all rumors, the Tigers are 100 per cent behind Manager “Red” Rolfe and Kell told his listeners “our club is far better than we have appeared to be thus far.”

A good time was had by all and the visiting Tigers and Skeeter Kell of the Athletics seemed to enjoy the evening as much as the Quarterback fans.