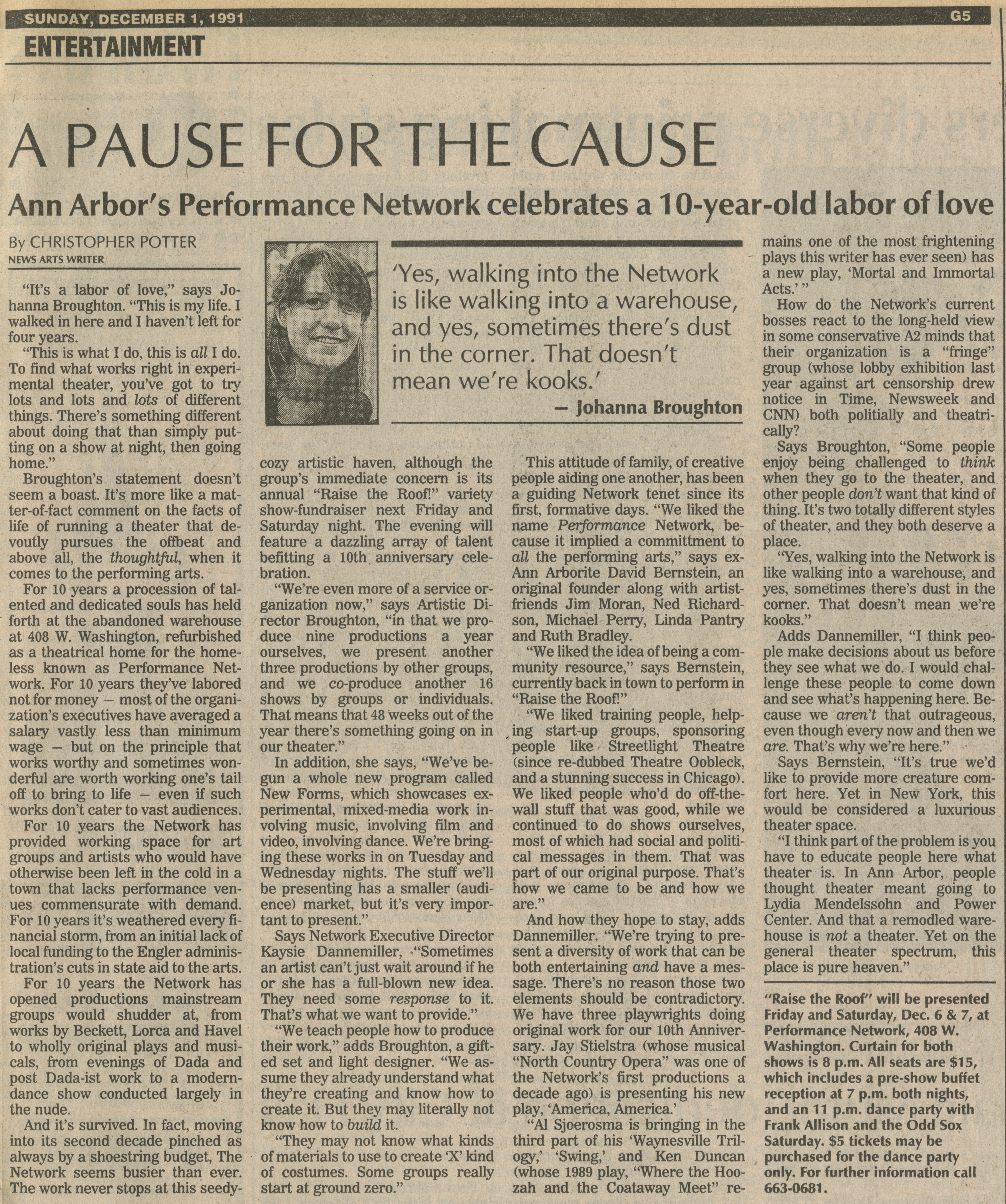 A PAUSE FOR THE CAUSE

'Yes, walking into the Network is like walking into a warehouse, and yes, sometimes there's dust in the corner. That doesn't mean we're kooks.' — Johanna Broughton

“It’s a labor of love,” says Johanna Broughton. “This is my life. I walked in here and I haven’t left for four years.

“This is what I do, this is all I do. To find what works right in experimental theater, you’ve got to try lots and lots and lots of different things. There’s something different about doing that than simply putting on a show at night, then going home.”

Broughton’s statement doesn’t seem a boast. It’s more like a matter-of-fact comment on the facts of life of running a theater that devoutly pursues the offbeat and above all, the thoughtful, when it comes to the performing arts.

For 10 years a procession of talented and dedicated souls has held forth at the abandoned warehouse at 408 W. Washington, refurbished as a theatrical home for the homeless known as Performance Network. For 10 years they’ve labored not for money - most of the organization’s executives have averaged a salary vastly less than minimum wage - but on the principle that works worthy and sometimes wonderful are worth working one’s tail off to bring to life - even if such works don’t cater to vast audiences.

For 10 years the Network has provided working space for art groups and artists who would have otherwise been left in the cold in a town that lacks performance venues commensurate with demand. For 10 years it’s weathered every financial storm, from an initial lack of local funding to the Engler administration’s cuts in state aid to the arts.

For 10 years the Network has opened productions mainstream groups would shudder at, from works by Beckett, Lorca and Havel to wholly original plays and musicals, from evenings of Dada and post Dada-ist work to a modem-dance show conducted largely in the nude.

And it’s survived. In fact, moving into its second decade pinched as always by a shoestring budget, The Network seems busier than ever. The work never stops at this seedy-cozy artistic haven, although the group’s immediate concern is its annual “Raise the Roof!” variety show-fundraiser next Friday and Saturday night. The evening will feature a dazzling array of talent befitting a 10th anniversary celebration.

“We’re even more of a service organization now,” says Artistic Director Broughton, “in that we produce nine productions a year ourselves, we present another three productions by other groups, and we co-produce another 16 shows by groups or individuals. That means that 48 weeks out of the year there’s something going on in our theater.”

Says Network Executive Director Kaysie Dannemiller, “Sometimes an artist can’t just wait around if he or she has a full-blown new idea. They need some response to it. That’s what we want to provide.”

“We teach people how to produce their work,” adds Broughton, a gifted set and light designer. “We assume they already understand what they’re creating and know how to create it. But they may literally not know how to build it.

“They may not know what kinds of materials to use to create ‘X’ kind of costumes. Some groups really start at ground zero.”

This attitude of family, of creative people aiding one another, has been a guiding Network tenet since its first, formative days. “We liked the name Performance Network, because it implied a committment to ail the performing arts,” says ex-Ann Arborite David Bernstein, an original founder along with artist-friends Jim Moran, Ned Richardson, Michael Perry, Linda Pantry and Ruth Bradley.

“We liked the idea of being a community resource,” says Bernstein, currently back in town to perform in “Raise the Roof!”

“We liked training people, helping start-up groups, sponsoring people like Streetlight Theatre (since re-dubbed Theatre Oobleck, and a stunning success in Chicago). We liked people who’d do off-the-wall stuff that was good, while we continued to do shows ourselves, most of which had social and political messages in them. That was part of our original purpose. That’s how we came to be and how we are.”

And how they hope to stay, adds Dannemiller. “We’re trying to present a diversity of work that can be both entertaining and have a message. There’s no reason those two elements should be contradictory. We have three playwrights doing original work for our 10th Anniversary. Jay Stielstra (whose musical “North Country Opera” was one of the Network’s first productions a decade ago) is presenting his new play, ‘America, America.’

“AJ Sjoerosma is bringing in the third part of his ‘Waynesville Trilogy,’ ‘Swing,’ and Ken Duncan (whose 1989 play, “Where the Hoozah and the Coataway Meet” remains one of the most frightening plays this writer has ever seen) has a new play, ‘Mortal and Immortal
Acts.’ ”

How do the Network’s current bosses react to the long-held view in some conservative A2 minds that their organization is a “fringe” group (whose lobby exhibition last year against art censorship drew notice in Time, Newsweek and CNN) both politically and theatrically?

Says Broughton, “Some people enjoy being challenged to think when they go to the theater, and other people don’t want that kind of thing. It’s two totally different styles of theater, and they both deserve a place.

“Yes, walking into the Network is like walking into a warehouse, and yes, sometimes there’s dust in the corner. That doesn’t mean we’re kooks.”

Adds Dannemiller, “I think people make decisions about us before they see what we do. I would challenge these people to come down and see what’s happening here. Because we aren’t that outrageous, even though every now and then we are. That’s why we’re here.”

Says Bernstein, “It’s true we’d like to provide more creature comfort here. Yet in New York, this would be considered a luxurious theater space.

“I think part of the problem is you have to educate people here what theater is. In Ann Arbor, people thought theater meant going to Lydia Mendelssohn and Power Center. And that a remodeled warehouse is not a theater. Yet on the general theater spectrum, this place is pure heaven.”

"Raise the Roof" will be presented Friday and Saturday, Dec. 6 & 7, at Performance Network, 408 W. Washington. Curtain for both shows is 8 p.m. All seats are $15, which includes a pre-show buffet reception at 7 p.m. both nights, and an 11 p.m. dance party with Frank Allison and the Odd Sox Saturday. $5 tickets may be purchased for the dance party only. For further information call 663-0681.