'Lark' probes the ties among writer, players and audience 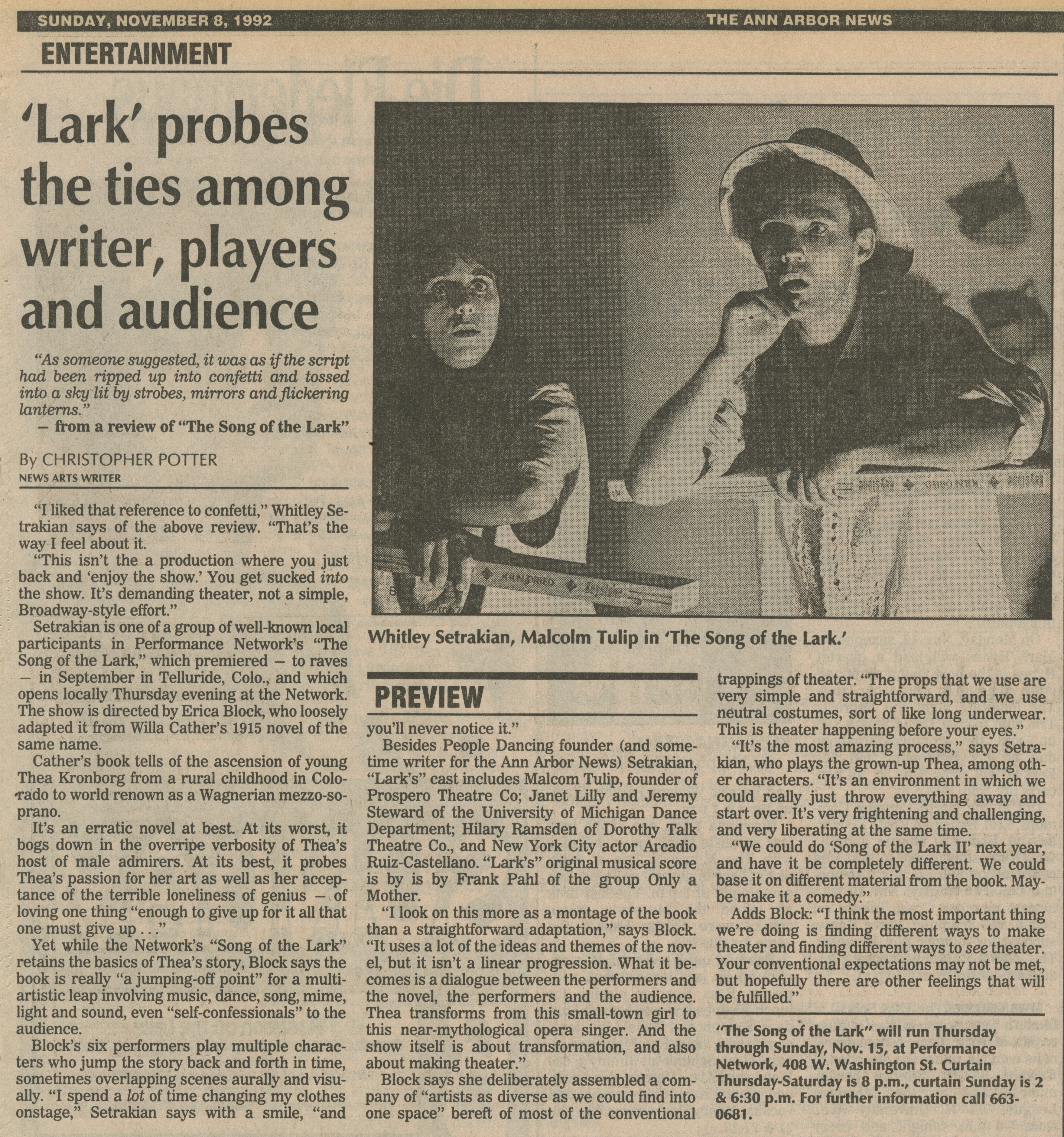 'Lark' probes the ties among writer, players and audience

“As someone suggested, it was as if the script had been ripped up into confetti and tossed into a sky lit by strobes, mirrors and flickering lanterns.”

- from a review of “The Song of the Lark”

Whitley Setrakian, Malcolm Tulip in 'The Song of the Lark.'

“I liked that reference to confetti,” Whitley Setrakian says of the above review. “That’s the way I feel about it.

“This isn’t a production where you just sit back and ‘enjoy the show.’ You get sucked into the show. It’s demanding theater, not a simple, Broadway-style effort.”

Setrakian is one of a group of well-known local participants in Performance Network’s “The Song of the Lark,” which premiered -- to raves -- in September in Telluride, Colo., and which opens locally Thursday evening at the Network. The show is directed by Erica Block, who loosely adapted it from Willa Cather's 1915 novel of the same name.

Cather’s book tells of the ascension of young Thea Kronborg from a rural childhood in Colorado to world renown as a Wagnerian mezzo-soprano.

It’s an erratic novel at best At its worst, it bogs down in the overripe verbosity of Thea’s host of male admirers. At its best, it probes Thea’s passion for her art as well as her acceptance of the terrible loneliness of genius -- of loving one thing “enough to give up for it all that one must give up...”

Yet while the Network’s “Song of the Lark” retains the basics of Thea’s story, Block says the book is really “a jumping-off point” for a multi-artistic leap involving music, dance, song, mime, light and sound, even “self-confessionals” to the audience.

Block’s six performers play multiple characters who jump the story back and forth in time, sometimes overlapping scenes aurally and visually. “I spend a lot of time changing my clothes onstage,” Setrakian says with a smile, “and you’ll never notice it.”

“I look on this more as a montage of the book than a straightforward adaptation,” says Block. “It uses a lot of the ideas and themes of the novel, but it isn’t a linear progression. What it becomes is a dialogue between the performers and the novel, the performers and the audience. Thea transforms from this small-town girl to this near-mythological opera singer. And the show itself is about transformation, and also about making theater.”

Block says she deliberately assembled a company of “artists as diverse as we could find into one space” bereft of most of the conventional trappings of theater. “The props that we use are very simple and straightforward, and we use neutral costumes, sort of like long underwear. This is theater happening before your eyes.”

“It’s the most amazing process,” says Setrakian, who plays the grown-up Thea, among other characters. “It’s an environment in which we could really just throw everything away and start over. It’s very frightening and challenging, and very liberating at the same time.

“We could do ‘Song of the Lark II’ next year, and have it be completely different. We could base it on different material from the book. Maybe make it a comedy.”