Musician To Jazz Things Up On Monday 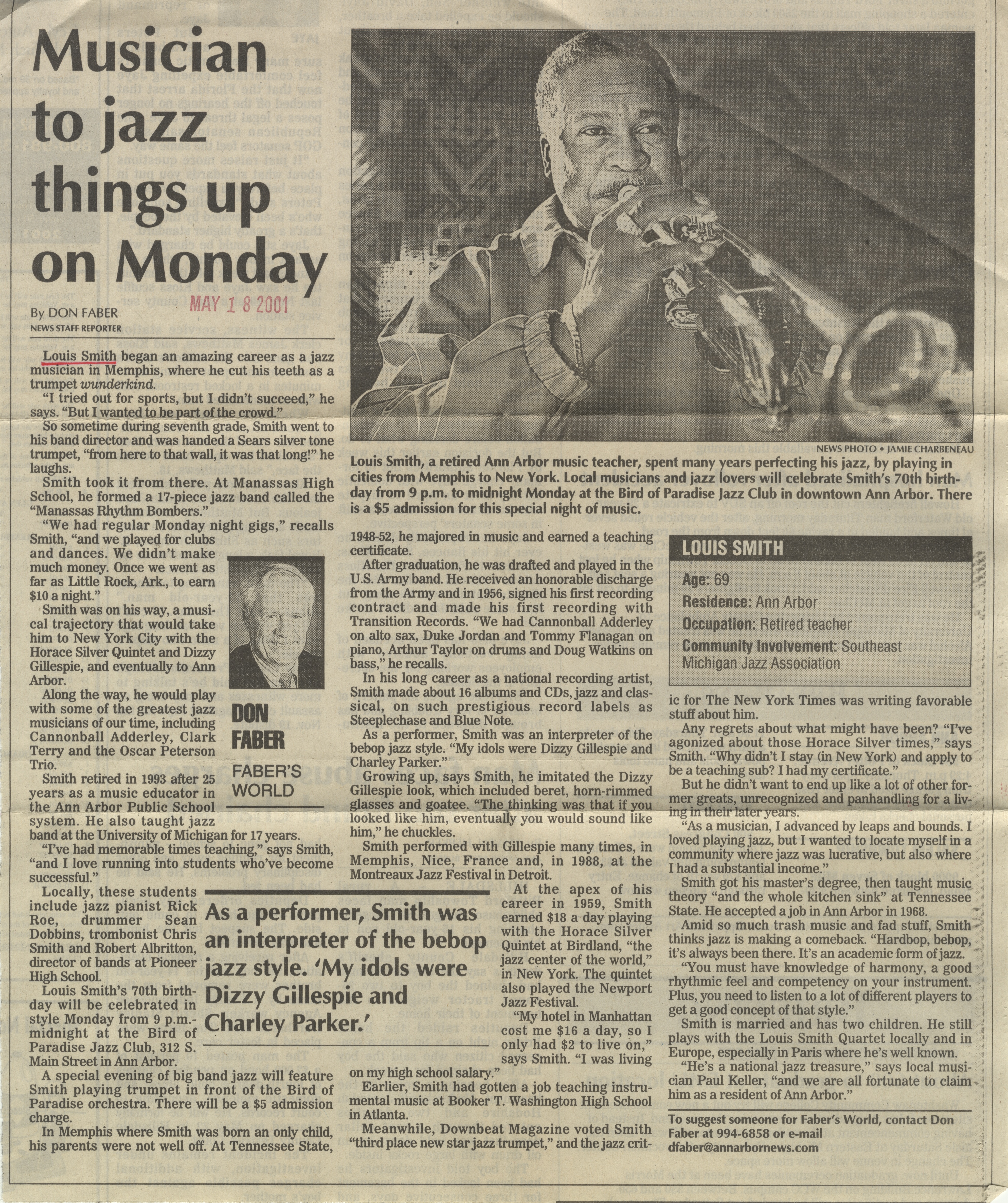 ﻿Musician to jazz things up on Monday

Louis Smith began an amazing career as a jazz musician in Memphis, where he cut his teeth as a trumpet wunderkind.

“I tried out for sports, but I didn’t succeed,” he says. “But I wanted to be part of the crowd.”

So sometime during seventh grade, Smith went to his band director and was handed a Sears silver tone trumpet, “from here to that wall, it was that long!” he laughs.

Smith took it from there. At Manassas High School, he formed a 17-piece jazz band called the “Manassas Rhythm Bombers.”

“We had regular Monday night gigs,” recalls Smith, “and we played for clubs and dances. We didn’t make much money. Once we went as far as Little Rock, Ark., to earn $10 a night.”

Smith was on his way, a musical trajectory that would take him to New York City with the Horace Silver Quintet and Dizzy Gillespie, and eventually to Ann Arbor.

Along the way, he would play with some of the greatest jazz musicians of our time, including Cannonball Adderley, Clark Terry and the Oscar Peterson Trio.

Smith retired in 1993 after 25 years as a music educator in the Ann Arbor Public School system. He also taught jazz band at the University of Michigan for 17 years.

Louis Smith’s 70th birthday will be celebrated in style Monday from 9 p.m.- midnight at the Bird of Paradise Jazz Club, 312 S. Main Street in Ann Arbor.

A special evening of big band jazz will feature Smith playing trumpet in front of the Bird of Paradise orchestra. There will be a $5 admission charge.

In Memphis where Smith was born an only child, his parents were not well off. At Tennessee State, 1948-52, he majored in music and earned a teaching certificate.

After graduation, he was drafted and played in the U.S. Army band. He received an honorable discharge from the Army and in 1956, signed his first recording contract and made his first recording with Transition Records. “We had Cannonball Adderley on alto sax, Duke Jordan and Tommy Flanagan on piano, Arthur Taylor on drums and Doug Watkins on bass,” he recalls.

In his long career as a national recording artist, Smith made about 16 albums and CDs, jazz and classical, on such prestigious record labels as Steeplechase and Blue Note.

As a performer, Smith was an interpreter of the bebop jazz style. “My idols were Dizzy Gillespie and Charley Parker.”

Growing up, says Smith, he imitated the Dizzy Gillespie look, which included beret, horn-rimmed glasses and goatee. “The.thinking was that if you looked like him, eventually you would sound like him,” he chuckles.

Smith performed with Gillespie many times, in Memphis, Nice, France and, in 1988, at the Montreaux Jazz Festival in Detroit.

At the apex of his career in 1959, Smith earned $18 a day playing with the Horace Silver Quintet at Birdland, “the jazz center of the world,” in New York. The quintet also played the Newport Jazz Festival.

Any regrets about what might have been? “I’ve agonized about those Horace Silver times,” says Smith. “Why didn’t I stay (in New York) and apply to be a teaching sub? I had my certificate.”

But he didn’t want to end up like a lot of other former greats, unrecognized and panhandling for a living in their later years.

“As a musician, I advanced by leaps and bounds. I loved playing jazz, but I wanted to locate myself in a community where jazz was lucrative, but also where I had a substantial income.”

Smith got his master’s degree, then taught music theory “and the whole kitchen sink” at Tennessee State. He accepted a job in Ann Arbor in 1968.

Amid so much trash music and fad stuff, Smith thinks jazz is making a comeback. “Hardbop, bebop, it’s always been there. It’s an academic form of jazz.

“You must have knowledge of harmony, a good rhythmic feel and competency on your instrument. Plus, you need to listen to a lot of different players to get a good concept of that style.”

Smith is married and has two children. He still plays with the Louis Smith Quartet locally and in Europe, especially in Paris where he’s well known.

“He’s a national jazz treasure,” says local musician Paul Keller, “and we are all fortunate to claim him as a resident of Ann Arbor.”

Louis Smith, a retired Ann Arbor music teacher, spent many years perfecting his jazz, by playing in cities from Memphis to New York. Local musicians and jazz lovers will celebrate Smith's 70th birthday from 9 p.m. to midnight Monday at the Bird of Paradise Jazz Club in downtown Ann Arbor. There is a $5 admission for this special night of music.
NEWS PHOTO • JAMIE CARBENEAU

To suggest someone for Faber's World, contact Don Faber at 994-6858 or e-mail dfaber@annarbornews.com