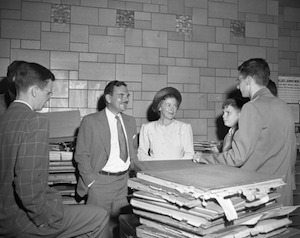 Crusading district attorney, governor of New York and two-time Republican nominee for president Thomas E. Dewey was a 1923 graduate of the University of Michigan with a soft spot in his heart for his alma mater. In July 1947, Dewey came with his wife Frances Hutt Dewey, and their two sons, Tom Jr. and John, to visit the campus and town. It was the year before his second run the presidency in 1948. Dewey suggested that the trip was to show his school to his 14-year-old Tom Jr., "a prospective student." He and his family met with UM President Alexander Ruthven, received a tour of the campus, including the Student Union, the office of the Michigan Daily and marveled at the growth of the school and town since he was an undergraduate.

At Michigan, Dewey was active on campus. He was editor of the Michigan Daily and performed in the campus choir. A photo from 1921 shows Dewey dressed as leprechaun for campus production of "Top of the Mornin'". He gave up a career in music for the law, attending Columbia University Law School. In 1956, Dewey returned again to UM campus to attend a meeting of Ann Arbor Republicans, meet with campus Young Republicans and promote the campaign of incumbent GOP President Dwight Eisenhower. Dewey was the first UM graduate to run for president of the United States. He was nominated in 1944 to run against incumbent President Franklin D. Roosevelt and in 1948 to run against incumbent Harry Truman. In 1958 the UM Board of Regents gave Dewey an award for Outstanding Achievement. Dewey was a native of Owosso, Mich.