Hugo Reichard and the Campus Radicals of 1940 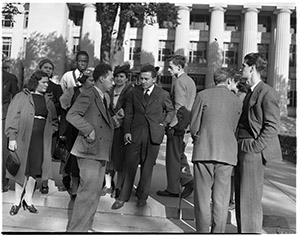 We recently stumbled upon an envelope of Ann Arbor News photo negatives from September 1940 titled “Radical Demonstration on Behalf of Dismissed Student Reinhardt," which eventually led to information on the student in question (including the correct spelling of the name): Hugo Reichard. It turns out that Reichard, along with several writers for the student-run Michigan Daily and members of the campus left-leaning American Student Union (ASU) had been ousted by U-M President Alexander G. Ruthven for “radical” and “fifth-column" activities following an April peace rally on campus - a decision that caused considerable controversy among faculty and students that year.

In November, two months after the photographs were taken, an “open hearing” on behalf of the dismissed students, sponsored by the Michigan Civil Rights Federation and the Michigan Committee for Academic Freedom, took place off campus in Ann Arbor’s Island Park. Roughly 500 people - including students, faculty, and family members - attended, where lawyers and members of the UAW-CIO excoriated Ruthven’s decision as a violation of the students' civil rights. The Ann Arbor News briefly covered the event in two articles, “Protest meeting is held at park” and “Father upsets ouster trial,” and further weighed in with an editorial on the hearing organizers' brazen use of "Marxist techniques."

Meanwhile, Ruthven defended his position in a speech in Chicago, where he advised administrative officers and professors of colleges and universities to "rid themselves of the notion that romanticism, sentimentalism, and indiscriminate tolerance are essential constituents of democracy." And on Friday, November 16, several former Michigan Daily writers, now leading newspapermen around the country, voiced their opinions on the matter during the Daily’s 50th anniversary dinner held at the Michigan Union.

With World War II raging in Europe and the United States not yet committed, these were indeed interesting times. For more on this controversial moment in U-M's history, read the 2015 article "The Doves of 1940" in Michigan Today by James Tobin.