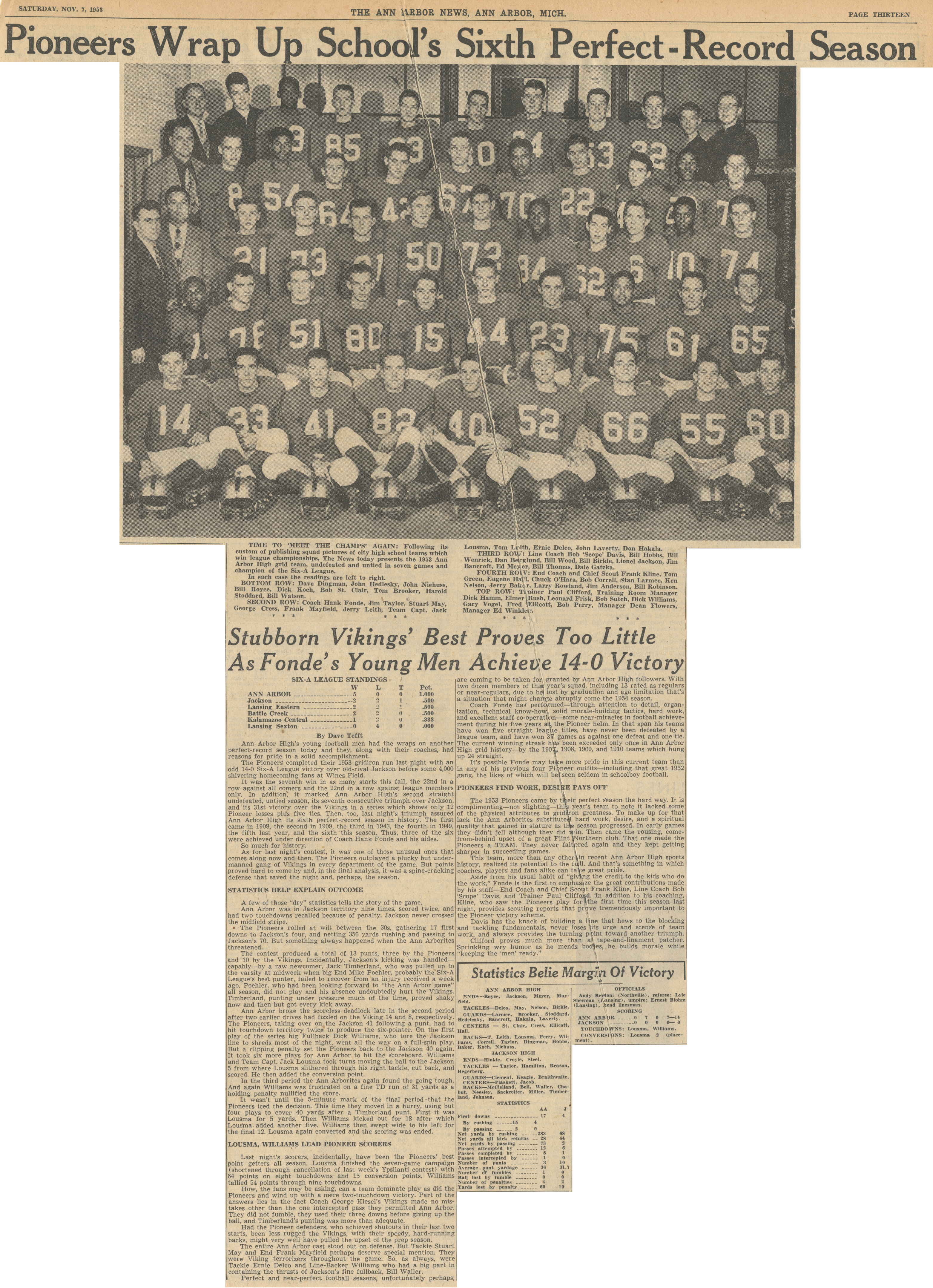 In each case the readings are left to right.

Ann Arbor High's young football men had the wraps on another perfect-record season today and they, along with their coaches, had reasons for pride in a solid accomplishment.

The Pioneers completed their 1953 gridiron run last night with an odd 14-0 Six-A League victory over Jackson before 4,000 shivering homecoming fans at Wines Field.

It was the seventh win in as many starts this fall, the 22nd in a row against all comers and the 22nd in a row against league members only. In addition, it marked Ann Arbor High's second straight undefeated,untied season, it's seventh consecutive triumph over Jackson, and it's 31st victory over the Vikings in a series which shows only 12 Pioneer losses plus five ties. Then, too last night's triumph assured Ann Arbor High its sixth perfect-record season in history. The first came in 1908, the second in 1909, the third in 1943, the fourth in 1949, the fifth last year, and the sixth this season. Thus, three of the six were achieved under direction of Coach Hank Fonde and his aides.

So much for history.

As for last night's contest, it was one of those unusual ones that comes along now and then The Pioneers outplayed a plucky but under manned gang of Vikings in every department of the game. But points proved hard to come by an, in the final analysis, it was a spine-cracking defense that saved the night and, perhaps, the season .

A few of those "dry" statistics tell the story of the game. Ann Arbor was in Jackson territory nine times, scored twice and had two touchdowns recalled because of penalty. Jackson never crossed the midfield stripe.

The Pioneers rolled at will between the 30s, gathering 17 first down to Jackson's four, and netting 356 yards rushing and passing to Jackson's 70. But something always happened when Ann Arborites threatened.

The contest produced a total of 13 punts, three by the Pioneers and 10 by the Vikings. Incidentally, Jackson's kicking was handled - capably - by a raw newcomer, Jack Timberland, who was pulled up to the varsity at midweek when big End Mike Poehler, probably the Six-A League's best punter, failed to recover from an injury received a week ago. Poehler, who had been looking forward to "the Ann Arbor game" all season, did not play and his absence undoubtedly hurt the Vikings. Timberland, punting under pressure much of the time,proved shaky now and then but got every kick away.

Ann Arbor broke the scoreless deadlock late in the second period after two earlier drives had fizzled on the Viking 14 and 8, respectively. The Pioneers,taking over on the Jackson 41 following a punt,had to hit touchdown territory twice to produce the six-pointer. On the first play of the series big Fullback Dick Williams, who tore Jackson line to shreds most of the night, went all the way on a full-spin play.

But a clipping penalty set the Pioneers back to the Jackson 40 again. It took six more plays for Ann Arbor to hit the scoreboard. Williams and Team Capt. Jack Lousma took turns moving the ball to the Jackson 5 from where Lousma slithered through his right tackle,cut back, and scored. He then added the conversion point.

In the third period the Ann Arborites again found the going tough. And again Williams was frustrated on a fine TD run of 31 yards as a holding penalty nullified the score.

It wasn't until the 5-minute mark of the final period that the Pioneers iced the decision. This time they moved in a hurry, using but four plays to cover 40 yards after Timberland punt. First it was Lousma for 5 yards. Then Williams kicked out for 18 after which Lousma added another five. Williams then swept wide to his left for the final 12. Lousma again converted and the scoring was ended.

How the fans may be asking, can a team dominate play as did the Pioneers and wind up with mere two-touchdown victory. Part of the answers lies in the fact Coach George Kiesel's Vikings made no mistakes other then the one intercepted pass they permitted Ann Arbor. They did not fumble, they used their three downs before giving up the ball, and Timberland's punting was more than adequate.

Had the Pioneer defenders, who achieved shutouts in thei last two starts, been less rugged the Vikings, with their speedy, hard-running backs, might very well have pulled the upset of the prep season.

The entire Ann Arbor cast stood out on defense.But Tackle Stuart May and End Frank Mayfield perhaps deserve special mention. They were Viking terrorizers throughout the game. So, as always, were Tackle Ernie Delco and Line-Backer Williams who had a big part in containing the thrusts of Jackson's fine fullback, Bill Waller.

Perfect and near-perfect football seasons, unfortunately perhaps, are coming to be taken for granted by Ann Arbor High followers. With two dozen members of this year's squad, including 13 rated as regulars or near-regulars, due to be lost by graduation and age limitation that's a situation that might change abruptly come the 1954 season.

Coach Fonde has performed - through attention to detail, organization, technical know-how, solid morale-building tactics, hard work, and excellent staff co-operation - some near-miracles in football achievement during his five years at Pioneer helm. In that span his teams have won five straight league titles, have never been defeated by a league team, an have won 37 games as against one defeat and on tie. The current winning streak has been exceeded only once Ann Arbor High grid history -by the 1907, 1908, 1909, and 1910 teams which hung up 24 straight.

It's possible Fonde may take more pride in this current team than in any of his previous four Pioneer outfits - including that great 1952 gang, the likes of which be seen seldom in schoolboy football.

The 1953 Pioneers came by their perfect season the hard way. It is complimenting - not slighting - this year's team to note it lacked some of the physical attributes to gridiron greatness. To make up for that lack the Ann Arborites substituted hard work, desire, and spiritual quality that gained in stature as the season progressed. In early games they didn't jell although they did win. Then came the rousing, come-from-behind upset of the great Flint Northern club. That one made the Pioneers a TEAM.They never faltered again and they kept getting sharper in succeeding games.

This team, more than any other in recent Ann Arbor High sports history, realized it's potential to the full. And that's something in which coaches, players and fans alike can take great pride.

Aside from his usual habit of "giving the credit to the kids who do the work,"  Fonde is the first emphasize the great contributions made by his staff- End Coach and Chief Scout Frank Kline, Line Coach Bob 'Scope' Davis, and Trainer Paul Clifford. In addition to his coaching, Kline, who saw the Pioneers play for the first time this season last night, provides scouting reports that prove tremendously important to the Pioneer victory scheme.

Davis has the knack of building a line that hews to the blocking and tackling fundamentals, never loses tits urge and scense of team work, and always provides the turning point toward another triumph.

Clifford proves much more than a tape-and-linament patcher. Sprinkling wry humor as he mends bodies, he builds morale while "keeping the'men' ready."