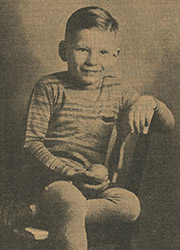 On March 8, 1935, the frozen body of seven-year-old Richard Streicher Jr. was found under a bridge in Island Park in Ypsilanti by another youngster, Buck Holt. The brutal murder remains unsolved to this day. Local law enforcement quickly developed a profile of the killer and the lurid headlines of follow-up articles left nothing to conjecture on the part of readers. The Mayor of Ypsilanti went so far as to warn parents to keep their children indoors with a "maniac" on the loose. Richard's parents and relatives were brought in for questioning and the Michigan State Police were called in by Governor Fitzgerald to assist in the investigation.

Lead after lead went dry, suspects were interrogated and released, and new clues failed to develop. In August, Circuit Court Judge George W. Sample took the unusual step of convening a one-man grand jury to air all the evidence thus far to put an end to the "intense feeling and suspicion within the community" regarding the investigation. The grand jury stretched to three weeks as local law enforcement officials were grilled and reluctant witnesses held in contempt but in November, 1937, proceedings were indefinitely suspended. Leads in 1938 and 1939 proved fruitless as well.

Although Ann Arbor News coverage of the Streicher case all but ended in 1939, interest in the case continued in the county. A 2007 article in Ypsilanti Gleanings asked readers for any information they might have on the case.

Recently, an obituary appeared on MLive announcing a formal graveside service and that funds had been raised to provide for a beautiful headstone for young Richard Streicher Jr.