Ann Arbor Yesterdays ~ How We Got To Here 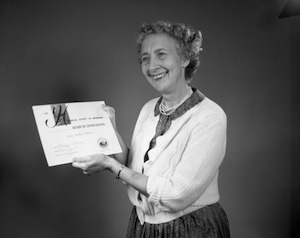 On February 12, 1960, Lela Duff launched a column in the Ann Arbor News called Ann Arbor Yesterdays that became so popular with readers that it ran for 75 weeks covering every aspect of local history in Ann Arbor and Washtenaw County. Ms. Duff was well known to thousands of Ann Arbor High School students but after 34 years of teaching English she retired and began her "second career" as a local historian.

Ann Arbor Yesterdays began, fittingly, with a discussion of the history of the naming of Ann Arbor. Her research was impeccable, using every available University, City, County and private archive and collection to tell the story of our development. Although historic buildings where a continual topic of the columns, Ms. Duff gave readers a rich tableau that included the immigrants who settled the area, theaterand civic organizations, music and recreation. The story of Lower Town and Downtown, the University and the names that made them possible. Ms. Duff devoted five columns to the early churches of Ann Arbor, from First Presbyterian to St. Thomas.

There were humorous columns on crime and youthful shenanigans. Two of the most heartfelt columns were a remembrance of Armistice Day, 1918 and Albert Warnhoff who made sure Christmas came to all children. Ms. Duff bid Ann Arbor News readers goodbye in July, 1961 and was immediately honored for her columns by the Historical Society of Michigan. And by October the columns became one of the most popular and enduring local history books in Ann Arbor. You'll want to check out a copy of Ann Arbor Yesterdaysfrom AADL to see the added illustrations and photos that bring to life the buildings and people from her columns. Ms. Duff continued to fight the good fight for historic preservation throughout her life. The "Grand Lady" of local history died in 1983 but her legacy lives on in her columns, her books and her commitment to our past.