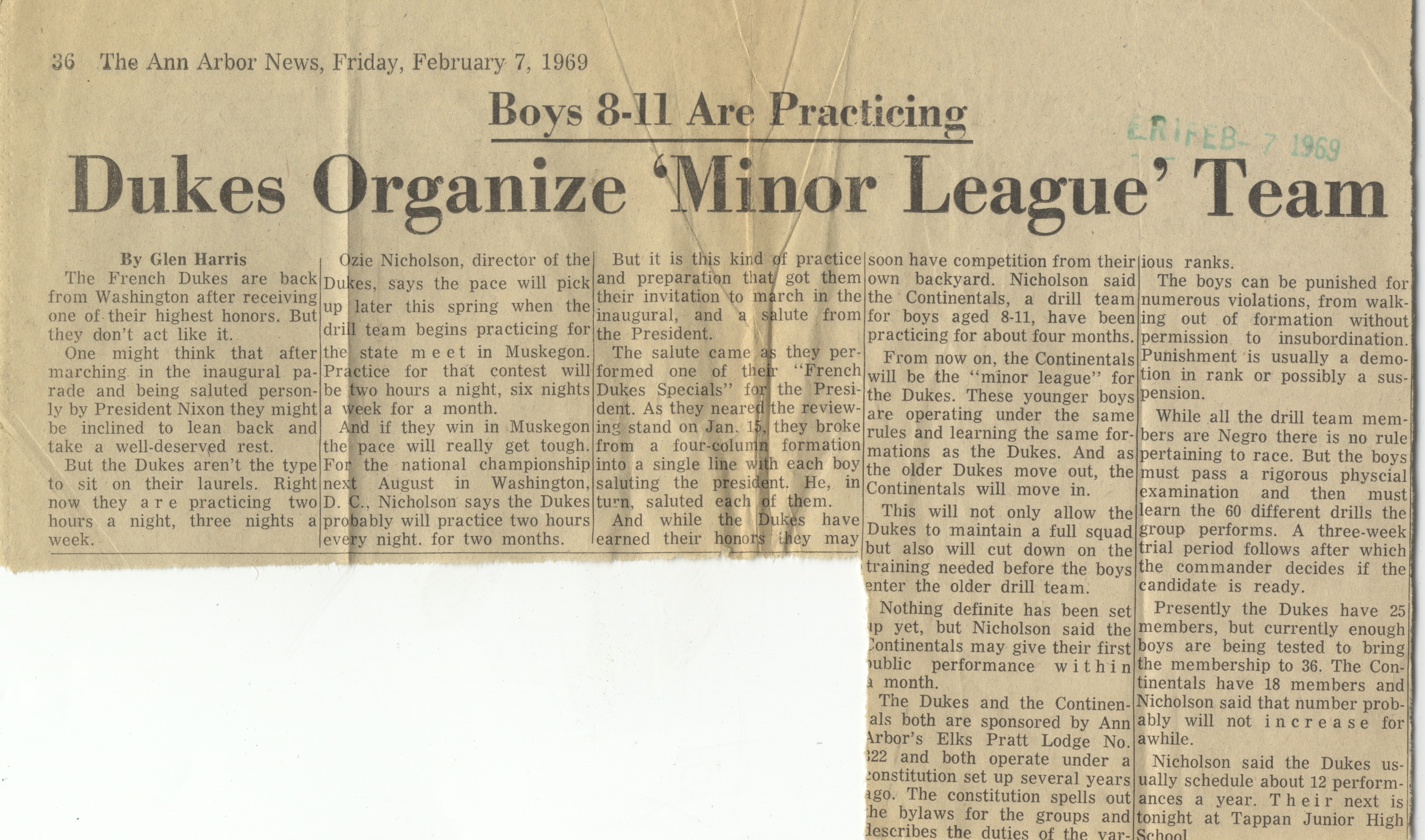 ﻿36 The Ann Arbor News, Friday, February 7, 1969<br><br>Boys 8-11 Are Practicing<br><br>Dukes Organize ‘Minor League’ Team<br><br>By Glen Harris<br><br>The French Dukes are back from Washington after receiving one of their highest honors. But they don’t act like it.<br><br>One might think that after marching in the inaugural parade and being saluted person-ly by President Nixon they might be inclined to lean back and take a well-deservpd rest.<br><br>But the Dukes aren’t the type to sit on their laurels. Right now they are practicing two hours a night, three nights a week.<br><br>Nicholson, director of the says the pace will pick up [later this spring when the team begins practicing for thcj^state m e e t in Muskegon, ice for that contest will hours a night, six nights for a month, if they win in Muskegon thePpace will really get tough. ~ “ the national championship August in Washington, Nicholson says the Dukes ibly will practice two hours night, for two months.<br><br>But it is this kind m practice and preparation that/ got them their invitation Ho mfrch in the ilute /from<br><br>inaugural, and the President.<br><br>The salute came a : they performed one of tli Dukes Specials” tc dent. As they neare ng. stand on Jan. 1 from a four-colui into a single saluting the turn, saluted<br><br>the^Presi' :he review-ill ey broke formation W h each boy<br><br>............... iI&s have<br><br>earned their h^ior^ ijfey may<br><br>ir-colui<br><br>d eacl c the<br><br>soon have competition from their own backyard. Nicholson said the Continentals, a drill team for boys aged 8-11, have been practicing for about four months.<br><br>From now on, the Continentals will be the “minor league’<br><br>the Dukes. These younger boys pension.<br><br>us ranks.<br><br>The boys can be punished for numerous violations, from walking out of formation without permission to insubordination. Punishment is usually a demotion in rank or possibly a<br><br>operating under the same rules and learning the same formations as the Dukes. And as the older Dukes move out, the Continentals will move in.<br><br>This will not only allow the Dukes to maintain a full squad but also will cut down on the training needed before the boys enter the older drill team.<br><br>Nothing definite has been set ip yet, but Nicholson said the 'ontinentals may give their first mblic performance within i month.<br><br>The Dukes and the Continen-als both are sponsored by Ann Arbor’s Elks Pratt Lodge No. 122 and both operate under a institution set up several years ago. The constitution spells out he bylaws for the groups and lescribes the duties of the<br><br>While all the drill team members are Negro there is no rule pertaining to race. But the boys must pass a rigorous physcial examination and then must learn the 60 different drills the group performs. A three-week trial period follows after which the commander decides if the candidate is ready.<br><br>Presently the Dukes have 25 members, but currently enough boys are being tested to bring the membership to 36. The Continentals have 18 members and Nicholson said that number probably will not increase for Swhile.<br><br>Nicholson said the Dukes usually schedule about 12 performances a year. Their next is tonight at Tappan Junior High " ml