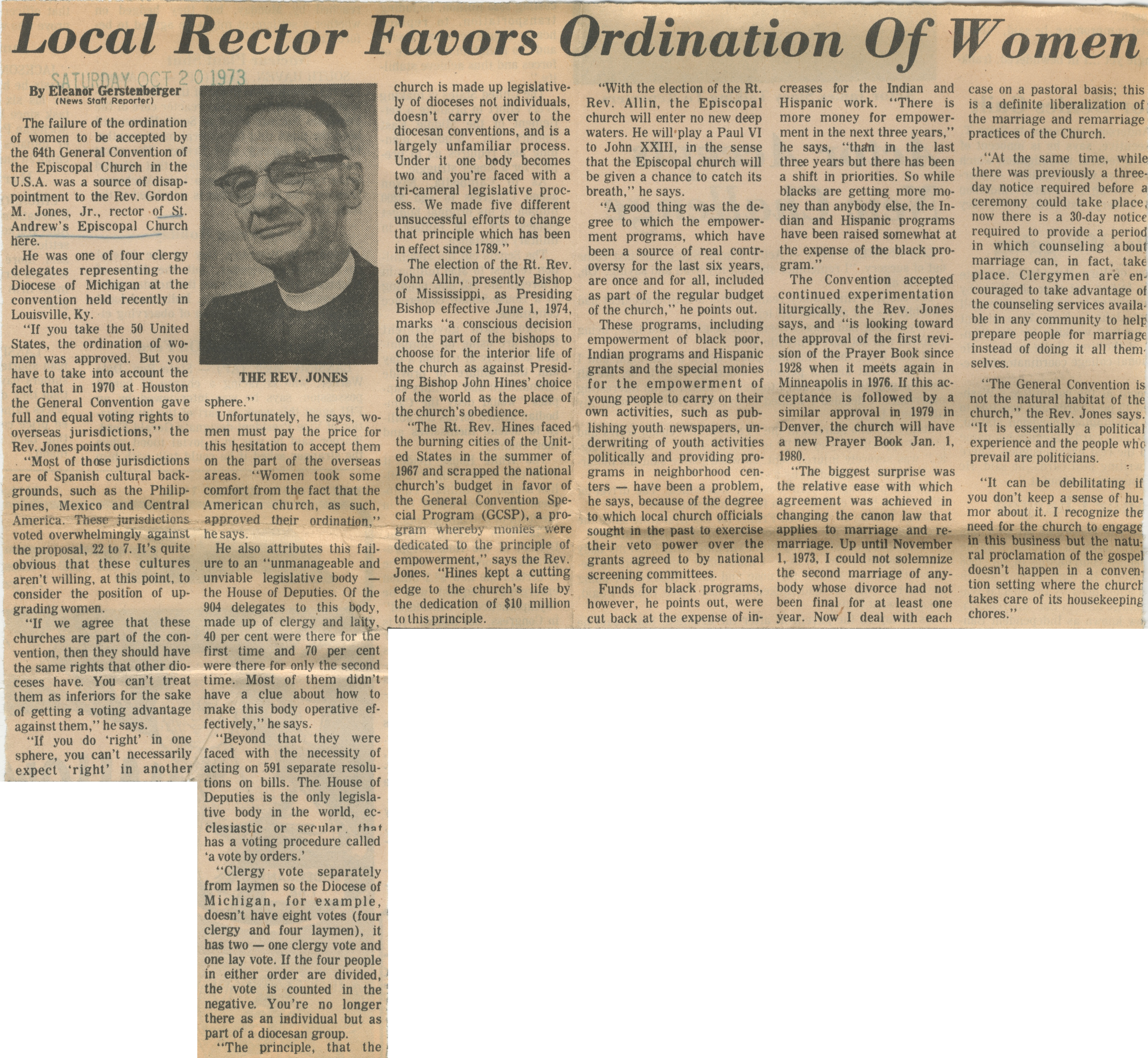 The failure of the ordination of women to be accepted by the 64th General Convention of the Episcopal Church in the U.S.A. was a source of disappointment to the Rev. Gordon M. Jones, Jr., rector of St. Andrew’s Episcopal Church here.

He was one of four clergy delegates representing the Diocese of Michigan at the convention held recently in Louisville, Ky.

“If you take the 50 United States, the ordination of women was approved. But you have to take into account the fact that in 1970 at Houston the General Convention gave full and equal voting rights to overseas jurisdictions,” the Rev. Jones points out.

"Most of those jurisdictions are of Spanish cultural backgrounds, such as the Philippines, Mexico and Central America.  These jurisdictions voted overwhelmingly against the proposal, 22-7. It's quite obvious that these cultures aren't willing, at this point, to consider the position of upgrading women.

If we agree that these churches are part of the convention, they should have the same rights as any other dioceses have. You can't treat them as inferiors for the sake of getting a voting advantage against them," he says.

"If you 'do right' in one sphere, you can't necessarily expect 'right' in another sphere."

Unfortunately, he says, women must pay the price for this hesitation to accept them on the part of the overseas areas.  "Women took some comfort from the fact that the American church, as such, approved their ordination," he says.

He also attributes this failure to an "unmanageable and unviable legislative body -- the House of Deputies. Of the 904 delegates to this body, made up of clergy and laity, 40% were there for the first time and 70% were there for only the second time.  Most of them didn't have a clue about how how to make this body operate effectively," he says.

"Beyond that they were faced with the necessity of acting on 591 resolutions on bills. The House of Deputies is the only legislative body in the world, ecclesiastic or secular, that have a voting procedure called 'a vote by orders'.

"Clergy vote separately from laymen so the Diocese of Michigan, for example, doesn’t have eight votes (four clergy and four laymen), it has two — one clergy vote and one lay vote. If the four people in either order are divided, the vote is counted in the negative. You’re no longer there as an individual but as part of a diocesan group.

"The principle, that the church is made up legislatively of dioceses not individuals, doesn’t carry over to the diocesan conventions, and is a largely unfamiliar process. Under it, one body becomes two and you’re faced with a tri-cameral legislative process. We made five different unsuccessful efforts to change that principle which has been in effect since 1789."

“The Rt. Rev. Hines faced the burning cities of the United States in the summer of 1967 and scrapped the national church’s budget in favor of the General Convention Special Program (GCSP), a program whereby monies were dedicated to the principle of empowerment," says Rev. Jones. "Hines kept a cutting edge to the church's life by the dedication of $10 million to this principle."

"A good thing was the degree to which the empowerment programs, which have been a source of real controversy for the last six years, are once and for all, included as part of the regular budget for the church," he points out.

These programs including empowerment of black poor, Indian programs and Hispanic grants and the special monies for the empowerment of young people to carry on their own activities, such as publishing youth newspapers and underwriting of youth activities politically and providing programs in neighborhood centers -- have been a problem, he says, because of the degree to which local church officials have sought in the past to exercise their veto power over the grants agreed to by national screening committees.

Funds for black programs, however, he points out, were cut back at the expense of increases for the Indian and Hispanic work. "There is more money for empowerment in the next three years.” he says, “than in the last three years but there has been a shift in priorities. So while blacks are getting more money than anybody else, the Indian and Hispanic programs have been raised somewhat at the expense of the black program."

The Convention accepted continued experimentation liturgically, the Rev. Jones says, and, "is looking toward the approval of the first revision of the Prayer Book since 1928 when it meets again in Minneapolis in 1976. If this acceptance is followed by similar approval in 1979 in Denver, the church will have a new Prayer Book Jan. 1, 1980.

"The biggest surprise was the relative ease with which agreement was achieved in changing canon law that applies to marriage and remarriage. Up until November 1, 1973, I could not solemnize the second marriage of anybody whose divorce had not been final for at least one year.  Now I deal with each case on a pastoral basis; this is a definite liberalization of the marriage and remarriage practices of the Church.

"At the same time, while there was previously a three-day notice required before a ceremony could take place, now there is a 30 notice required to provide a period in which counseling about marriage can, in fact, take place. Clergymen are encouraged to take advantage of the counseling services in any community to help people prepare for marriage instead of doing it all themselves.

"The General Convention is not the natural habitat of the church," the Rev. Jones says. "It is essentially a political experience and the people who prevail are politicians.

"It can be debilitating if you don't keep a sense of humor about it.  I recognize the need for the church to engage in this business, but the natural proclamation of the gospel does not happen in a convention setting where the church takes care of its housekeeping chores."