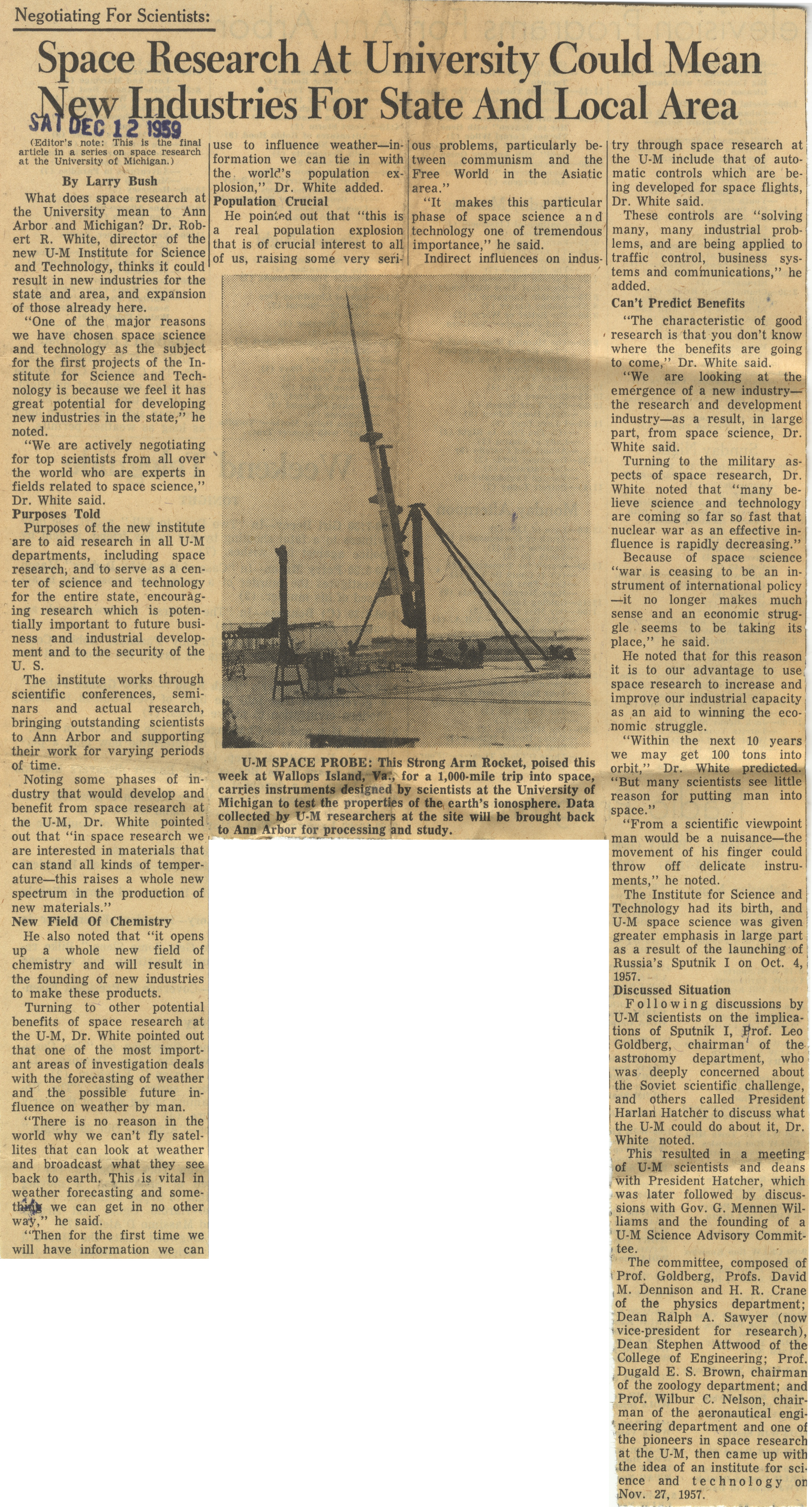 (Editor's note:  This is the final article in a series on space research at the University of Michigan.)

What does space research at the University mean to Ann Arbor and Michigan? Dr. Robert R. White, director of the new U-M Institute for Science and Technology, thinks it could result in new industries for the state and area, and expansion of those already here.

“One of the major reasons we have chosen space science and technology as the subject for the first projects of the Institute for Science and Technology is because we feel it has great potential for developing new industries in the state,” he noted.

“We are actively negotiating for top scientists from all over the world who are experts in fields related to space science,” Dr. White said.

Purposes of the new institute are to aid research in all U-M departments, including space research, and to serve as a center of science and technology for the entire state, encouraging research which is potentially important to future business and industrial development and to the security of the U.S.

The Institute works through scientific conferences, seminars and actual research, bringing outstanding scientists to Ann Arbor and supporting their work for varying periods of time.

Noting some phases of industry that would develop and benefit from space research at the U-M, Dr. White pointed out that “in space research we are interested in materials that can stand all kinds of temperature—this raises a whole new spectrum in the production of new materials.”

He also noted that “it opens up a whole new field of chemistry and will result in the founding of new industries to make these products.

Turning to other potential benefits of space research at the U-M, Dr. White pointed out that one of the most important areas of investigation deals with the forecasting of weather and the possible future influence on weather by man.

“There is no reason in the world why we can’t fly satellites that can look at weather and broadcast what they see back to earth. This is vital in weather forecasting and something we can get in no other way,” he said.

He pointed out that “this is a real population explosion that is of crucial interest to all of us, raising some very serious problems, particularly between communism and the Free World in the Asiatic area."

“It makes this particular phase of space science and technology one of tremendous importance,” he said.

Indirect influences on industry through space research at the U-M include that of automatic controls which are being developed for space flights, Dr. White said.

These controls are “solving many, many industrial problems, and are being applied to traffic control, business systems and communications,” he added.

“The characteristic of good research is that you don’t know where the benefits are going to come,” Dr. White said.

“We are looking at the emergence of a new industry— the research and development industry—as a result, in large part, from space science, Dr. White said.

Turning to the military aspects of space research, Dr. White noted that “many believe science and technology are coming so far so fast that nuclear war as an effective influence is rapidly decreasing.”

Because of space science “war is ceasing to be an instrument of international policy —it no longer makes much sense and an economic struggle seems to be taking its place,” he said.

He noted that for this reason it is to our advantage to use space research to increase and improve our industrial capacity as an aid to winning the economic struggle.

“Within the next 10 years we may get 100 tons into orbit,” Dr. White predicted, “But many scientists see little reason for putting man into space.”

"From a scientific viewpoint man would be a nuisance—the movement of his finger could throw off delicate instruments,” he noted.

The Institute for Science and Technology had its birth, and U-M space science was given greater emphasis in large part as a result of the launching of Russia’s Sputnik I on Oct. 4, 1957.

Following discussions by U-M scientists on the implications of Sputnik I, Prof. Leo Goldberg, chairman of the astronomy department, who was deeply concerned about the Soviet scientific challenge, and others called President Harlan Hatcher to discuss what the U-M could do about it, Dr. White noted.

This resulted in a meeting of U-M scientists and deans with President Hatcher, which was later followed by discussions with Gov. G. Mennen Williams and the founding of a U-M Science Advisory Committee.

The committee, composed of Prof. Goldberg, Profs. David M. Dennison and H. R. Crane of the physics department; Dean Ralph A. Sawyer (now vice-president for research), Dean Stephen Attwood of the College of Engineering; Prof. Dugald E. S. Brown, chairman of the zoology department; and Prof. Wilbur C. Nelson, chairman of the aeronautical engineering department and one of the pioneers in space research at the U-M, then came up with the idea of an institute for science and technology on Nov. 27, 1957.

[image]:  U-M SPACE PROBE:  This Strong Arm Rocket, poised this week at Wallops Island, Va., for a 1,000-mile trip into space, carries instruments designed by scientists at the University of Michigan to test the properties of the earth's ionosphere.  Data collected by U-M researchers at the site will be brought back to Ann Arbor for processing and study.