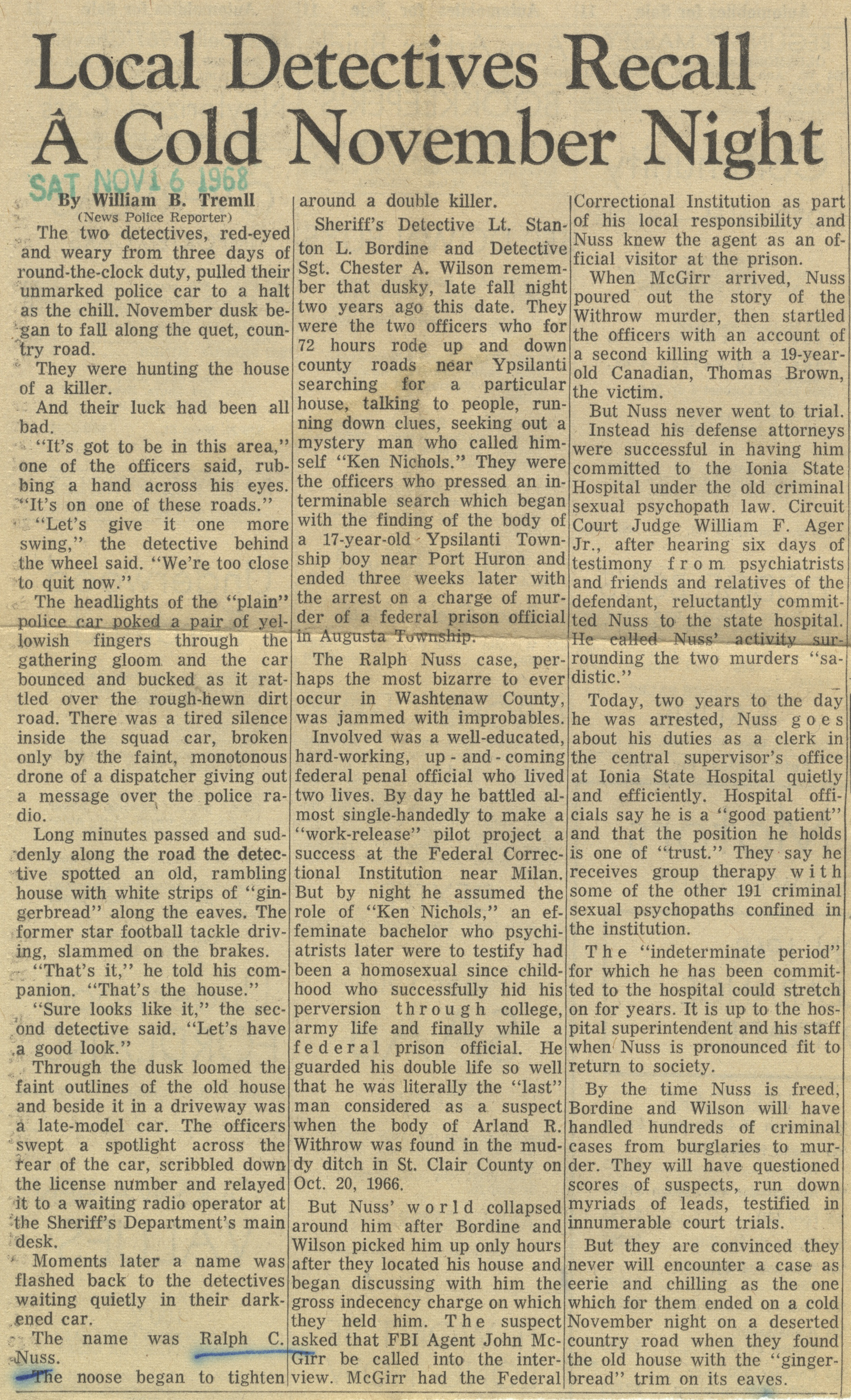 The two detectives, red-eyed and weary from three days of round-the-clock duty, pulled their unmarked police car to a halt as the chill. November dusk began to fall along the quet, country road.

They were hunting the house of a killer.

And their luck had been all bad.

“It’s got to be in this area,” one of the officers said, rubbing a hand across his eyes. '“It’s on one of these roads.” "Let’s give it one more swing,” the detective behind the wheel said. “We’re too close to quit now.”

The headlights of the “plain” police ear poked a pair of yellowish fingers through the gathering gloom and the car bounced and bucked, as it rattled over the rough-hewn dirt road. There was a tired silence inside the squad car, broken only by the faint, monotonous drone of a dispatcher giving out a message over the police radio.

Long minutes passed and suddenly along the road the detective spotted an old, rambling house with white strips of “gingerbread” along the eaves. The former star football tackle driving, slammed on the brakes.

“Sure looks like it,” the second detective said. “Let’s have .a good look.”

Through the dusk loomed the faint outlines of the old house and beside it in a driveway was a late-model car. The officers swept a spotlight across the rear of the car, scribbled down the license number and relayed it to a waiting radio operator at the Sheriff’s Department's main desk.

Moments later a name was flashed back to the detectives waiting quietly in their darkened car.

The name was Ralph C.Nuss.

The noose began to tighten

around a double killer.

Sheriff’s Detective Lt. Stanton L. Bordine and Detective Sgt. Chester A. Wilson remember that dusky, late fall night two years ago this date. They were the two officers who for 72 hours rode up and down county roads near Ypsilanti searching for a particular house, talking to people, running down clues, seeking out a mystery man who called himself “Ken Nichols.” They were the officers who pressed an interminable search which began with the finding of the body of a 17-year-old Ypsilanti Township boy near Port Huron and ended three weeks later with the arrest on a charge of murder of a federal prison official in Augusta Township.

The Ralph Nuss case, perhaps the most bizarre to ever occur in Washtenaw County, was jammed with improbables.

Involved was a well-educated, hard-working, up - and - coming federal penal official who lived two lives. By day he battled almost single-handedly to make a “work-release” pilot project a success at the Federal Correctional Institution near Milan. But by night he assumed the role of “Ken Nichols,” an effeminate bachelor who psychiatrists later were to testify had been a homosexual since childhood who successfully hid his perversion through college, army life and finally while a federal prison official. He guarded his double life so well that he was literally the “last” man considered as a suspect when the body of Arland R. Withrow was found in the muddy ditch in St. Clair County on Oct. 20, 1966.

But Nuss’ world collapsed around him after Bordine and Wilson picked him up only hours after they located his house and began discussing with him the gross indecency charge on which they held him. The suspect asked that FBI Agent John McGirr be called into the interview. McGirr had the Federal

Correctional Institution as part of his local responsibility and Nuss knew the agent as an official visitor at the prison.

When McGirr arrived, Nuss poured out the story of the Withrow murder, then startled the officers with an account of a second killing with a 19-year-old Canadian, Thomas Brown, the victim.

But Nuss never went to trial.

Instead his defense attorneys were successful in having him committed to the Ionia State Hospital under the old criminal sexual psychopath law. Circuit Court Judge William F. Ager Jr., after hearing six days of testimony from psychiatrists and friends and relatives of the defendant, reluctantly committed Nuss to the state hospital. He called Nuss' activity surrounding the two murders “sadistic.”

Today, two years to the day he was arrested, Nuss goes about his duties as a clerk in the central supervisor's office at Ionia State Hospital quietly and efficiently. Hospital officials say he is a “good patient” and that the position he holds is one of “trust.” They say he receives group therapy with some of the other 191 criminal sexual psychopaths confined in the institution.

The “indeterminate period” for which he has been committed to the hospital could stretch on for years. It is up to the hospital superintendent and his staff when Nuss is pronounced fit to return to society.

By the time Nuss is freed, Bordine and Wilson will have handled hundreds of criminal cases from burglaries to murder. They will have questioned scores of suspects, run down myriads of leads, testified in innumerable court trials.

But they are convinced they never will encounter a case as eerie and chilling as the one which for them ended on a cold November night on a deserted country road when they found the old house with the "gingerbread” trim on its eaves.