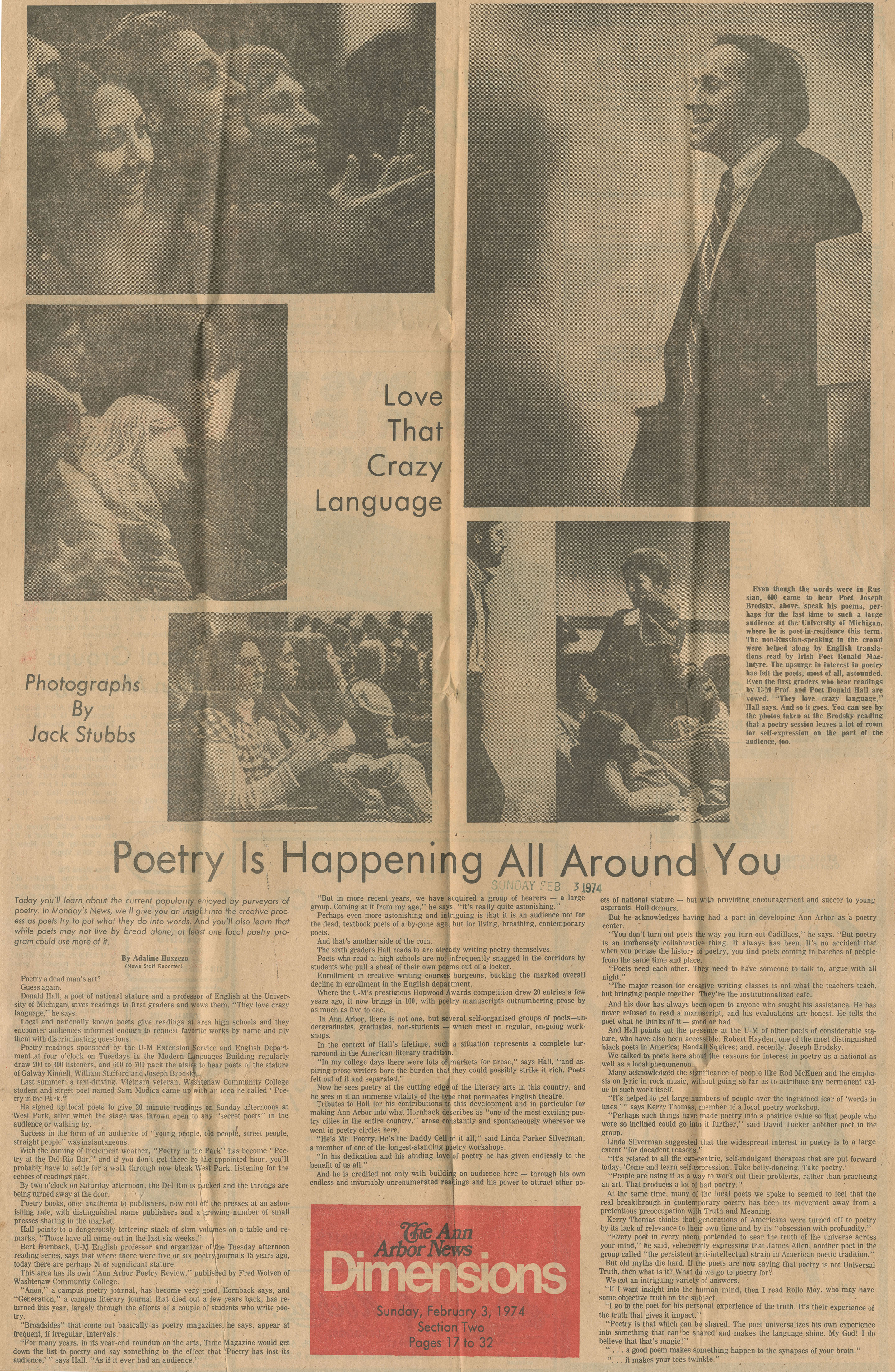 Today you'll learn about the current popularity enjoyed by purveyors of poetry. In Monday's News, we'll give you an insight into the creative process as poets try to put what they do into words. And you'll also learn that while poets may not live by bread alone, at least one local program could use more of it.

Donald Hill, a poet of national stature and a professor of English at the University of Michigan, gives readings to first graders and wows them. "They love crazy language," he says.

Local and nationally known poets give readings at area high schools and they encounter audiences informed enough to request favorite works by name and ply them with discriminating questions.

Poetry readings sponsored by the U-M Extension Service and English Department at four o'clock on Tuesdays in the Modern Languages Building regularly of Galway Kinnell, William Stafford and Joseph Brodsky.

He signed up local poets to give 20 minutes readings on Sunday afternoons at West Park, after which the stage was thrown open to any "secret poets" in the audience or walking by.

Success in the form of an audience of "young people, old people, street people, straight people" was instantaneous.

With the coming of inclement weather, "Poetry in the Park" has become "poetry at the Del Rio Bar," and if you don't get there by appointed hour, you'll probably have to settle for a walk through now bleak West Park, listening for the echoes of reading past.

By two o'clock on Saturday afternoon, the Del Rio is packed and the throngs are being turned at the door.

Poetry books, once anathema to publishers, now roll off the presses at an astonishing rate, with distinguished name publishers and a growing number of small presses sharing in the market.

Hall points to a dangerously tottering stack of slim volumes on a table and remarks, "Those have all come out in the last weeks."

Bert Hornbeck, U-M English professor and organizer of the Tuesday's afternoon reading series, says that where there were five or six poetry journals 15 years ago, today there are perhaps 20 significant stature.

This area has its own "Ann Arbor Poetry Review," published by Fred Wolven of Washtenaw Community College.

"Anon," a campus poetry journal, has become very good, Hornback says, and "Generation," a campus  literary journal that died out a few years back, has returned this year, largely through the efforts of a couple of students who write poetry.

"Broadside" that come out basically as poetry magazines, he says, appear at frequent, if irregular, intervals.

"For many years, in its year-end roundup on the arts, Time Magazine would get down the list to poetry and say something to the effect that 'Poetry has lost its audience,' says Hall. "As if it ever had an audience."

"But in more recent years, we have acquired a group of hearers - a large group. Coming at it from my age," he says, "it's really quite astonishing."
Perhaps even more poets of a by-gone age, but for living, breathing, contemporary poets.

And that's another side of the coin.
The sixth graders Hall reads to are already writing poetry themselves.
Poets who read at high schools are not infrequently snagged inn the corridors by students who pull a sheaf of their own poems out of a locker.

Where the U-M's prestigious Hopwood Awards competition drew 20 entries a few years ago, it now brings 100, with poetry manuscripts outnumbering prose by as much as five to one.

In Ann Arbor, there is not one, but several self-organized groups of poets- undergraduates, graduates, non-students - which meet in regular, on-going work shops.

In the context of Hall's lifetime, such a situation represents a complete turnaround in the American literary tradition.

"In my college days there were lots of markets for prose," says Hall, "and aspiring prose writers bore the burden that they could possibly strike it rich. Poets felt out of it and separated."

Now he sees poetry at the cutting edge of the literary arts in this country, and he sees in it an immense vitality of the type that permeates English theatre.

Tributes to Hall for his contributions to this development and in particular for making Ann Arbor into what Hornback describes as "one of the most exciting poetry cities in the entire country," arose constantly and spontaneously wherever we went in poetry circles here.

"He's Mr. Poetry. He's the Daddy Cell of it all," said Linda Parker Silverman, a member of one of the longest-standing poetry workshops.

"In his dedication and his abiding love of poetry he has given endlessly to the benefit of us all."

And he is credited not only with building an audience here - through his own endless and invariably unremunerated readings and his power to attract other poets of national stature - but with providing encouragement and succor to young aspirants. Hall demurs.

But he acknowledges having ha a part in developing Ann Arbor as a poetry center.

"You don't turn out poets the way you turn out Cadillacs," he says. "But poetry is an immensely collaborative thing. It always has been. It's no accident that when you peruse the history of poetry, you find poets coming in batches of people from the same time and place.

"Poets need each other. They need to have someone to talk to, argue with all night."

"The major reason for creative writing classes is not what the teachers teach, but bringing people together. They're the institutionalized cafe.

And his door has always been open to anyone who sought his assistance. He has never refused to read a manuscript, and his evaluations are honest. He tells the poet what he thinks of it- good or bad.

And Hall points out the presence at the U-M of other poets of considerable stature, who have also been accessible: Robert Hayden, one of the most distinguished black poets in America; Randall Squires; and recently, Joseph Brodsky.

We talked to poets here about the reasons for interest in poetry as a national as well as a local phenomenon.

Many acknowledged the significance of people like Rod McKuen and the emphasis on lyric in rock music, without going so far as to attribute any permanent value to such work itself.

"It's helped to get large numbers of people over the ingrained fear of 'words in lines,' says Kerry Thomas, member of a local poetry workshop.

"Perhaps such things have made poetry into a positive value so that people who were so inclined could go into it further," said David Tucker another poet in the group.

Linda Silverman suggested that the widespread interest in poetry is to a large extent "for decadent reasons."

"It's related to all the ego-centric, self-indulgent therapies that are put forward today. 'come and learn self-expression. Take belly-dancing. Take poetry.'

"People are using it as a way to work out their problems, rather than practicing an art. That produces a lot of bad poetry."

At the same time, many of the local poets we spoke to seemed to feel that the real breakthrough in contemporary poetry has been its movement away from a pretentious preoccupation with Truth and Meaning.

Kerry Thomas thinks that generations of Americans were turned off to poetry by its lack of relevance to their own time and by its "obsession with profundity."

Every poet in every poem portended to sear the truth of the universe across your mind," he said, vehemently expressing that James Allen, another poet in the group called "the persistent anti-intellectual strain in American poetic tradition."

But old myths die hard. If the poets are now saying that poetry is not Universal Truth, then what is it? What do we go to poetry for?

We got an intriguing variety of answers.

"If I want insight into human mind, then I read Rollo May, who may have some objective truth on the subject.

"Poetry is that which can be shared. The poet universalizes his own experience into something that can be shared and makes the language shine. My God! I do believe that that's magic!"

"... a good poem makes something happen to the synapses of your brain."

Even though the words were in Russian, 600 came to hear Poet Joseph Brodsky, above, speak his poems, perhaps for the last time to such a large audience at the University of Michigan, where he is poet-in-residence this term. The non-Russian-speaking in the crowd were he helped along by English translations read by Irish Poet Ronald Mac-Intyre. The upsurge in interest in poetry has left the poets, most of all, astounded. Even the first graders who hear readings by U-M Prof. and Poet Donald Hall are vowed. "They love crazy language," Hall says. And so it goes. You can see by the photos taken at the Brodsky reading that a poetry session leaves a lot of room for self-expression on the audience, too.