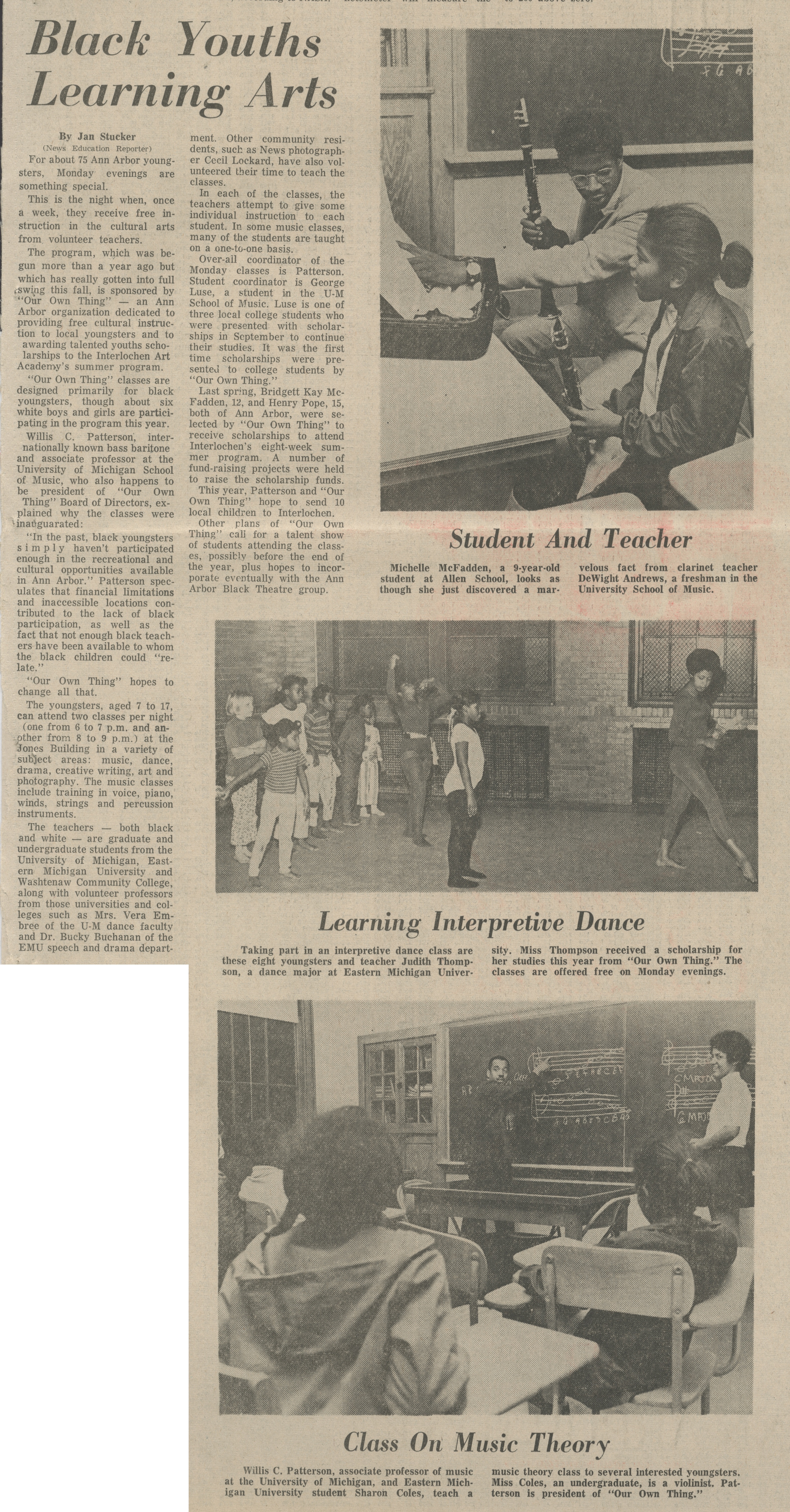 For about 75 Ann Arbor youngsters, Monday evenings are something special.

This is the night when, once a week, they receive free instruction in the cultural arts from volunteer teachers.

The program, which was begun more than a year ago but which has really gotten into full swing this fall, is sponsored by "Our Own Thing" -- an Ann Arbor organization dedicated to providing free cultural instruction to local youngsters and awarding talented youths scholarships to the Interlochen Art Academy's summer program.

"Our Own Thing" classes are designed primarily for black youngsters, though about six white boys and girls participating in the program this year.

Willis C. Patterson, internationally known bass baritone and associate professor at the University of Michigan School of Music, who also happens to be president of "Our Own Thing" Board of Directors, explained why the classes were inauguarated [sic]:

"In the past, black youngsters simply haven't participated enough in the recreational and cultural opportunities available in Ann Arbor." Patterson speculates that financial limitations and inaccessible locations contributed to the lack of black participation, as well as the fact that not enough black teachers have been available to whom the black children could "relate."

"Our Own Thing" hopes to change all that.

The youngsters, aged y to 17, can attend two classes per night (one from 6 to 7 p.m. and another from 8 to 9 p.m.) at the Jones Building in a variety of subject areas: music, dance, drama, creative writing, art and photography. The music classes include training in voice, piano, winds, strings and percussion instruments.

The teachers -- both black and white -- are graduate and undergraduate students from the University of Michigan, Eastern Michigan University and Washtenaw Community College, along with volunteer professors from those universities and colleges such as Mrs. Vera Embree of the U-M dance faculty and Dr. Bucky Buchanan of the EMU speech and drama department. Other community residents, such as news photographer Cecil Lockard, have also volunteered their time to teach the classes.

In each of the classes, the teachers attempt to give some individual instruction to each student. In some music classes, many of the students are taught on a one-to-one basis.

Last spring, Bridgett Kay McFadden, 12, and Henry Pope, 15, both of Ann Arbor, were selected by "Our Own Thing" to receive scholarships to attend Interlochen's eight-week summer program. A number of fund-raising projects were held to raise the scholarship funds.

This year, Patterson and "Our Own Thing" hope to send 10 local children to Interlochen.

Other plans of "Our Own Thing" call for a talent show of students attending the classes, possibly before the end of the year, plus hopes to incorporate, eventually with the Ann Arbor Black Theatre Group

Michelle McFadden, a 9-year-old student at Allen School, looks as though she just discovered a marvelous fact from clarinet teacher DeWight Andrews, a freshman in the University School of Music.

Taking part in an interpretive dance class are these eight youngsters and teacher Judith Thompson, a dance major at Eastern Michigan University. Miss Thompson received a scholarship for her studies this year from "Our Own Thing." The classes are offered free on Monday evenings.

Willis C. Patterson, associate professor of music at the University of Michigan, and Eastern Michigan student Sharon Coles, teach a music theory class to several interested youngsters. Miss Coles, an undergraduate, is a violinist. Patterson is president of "Our Own Thing."