Providing for the Family During the Great Depression: An interview with Virginia Davis-Brown 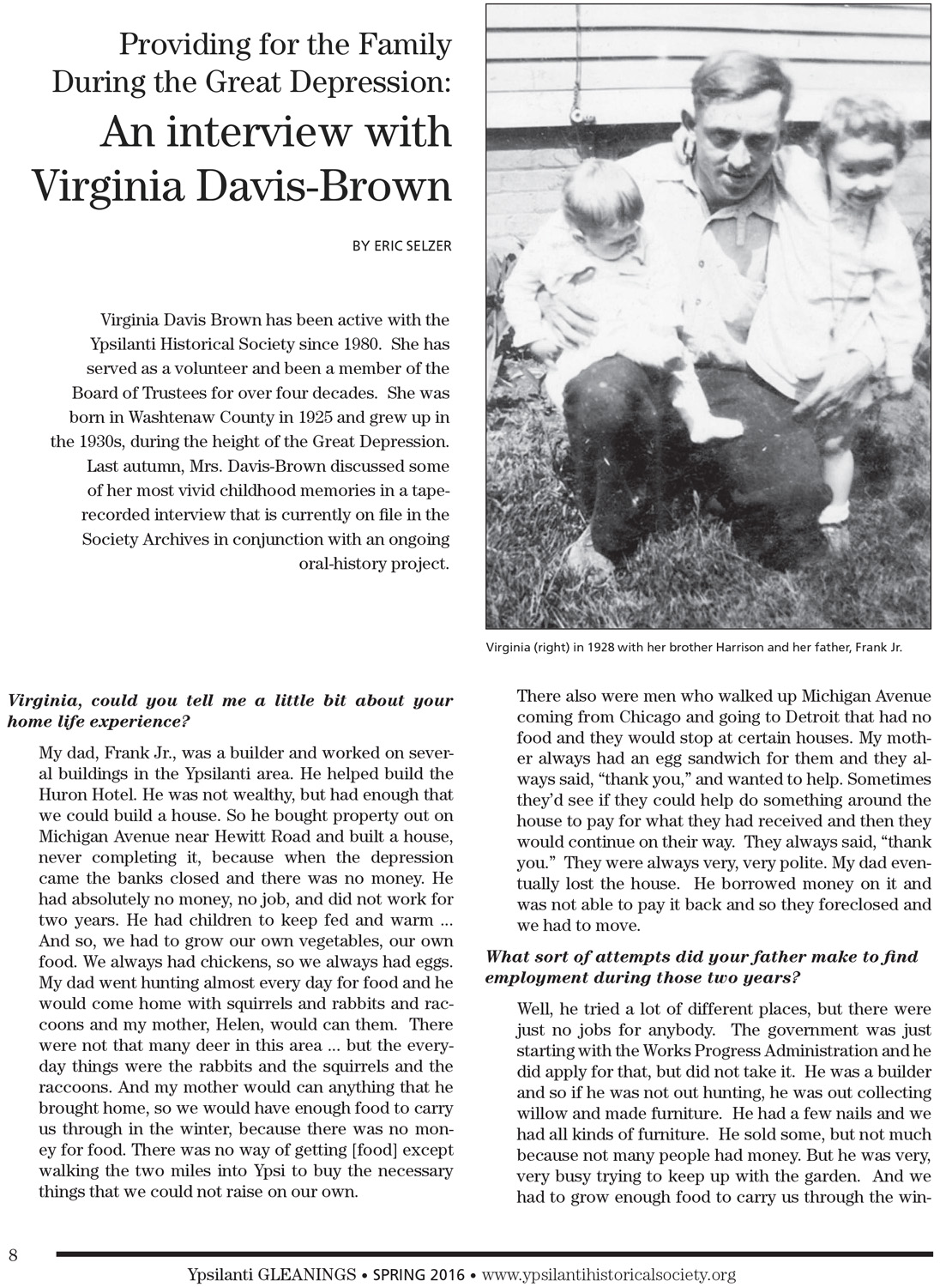 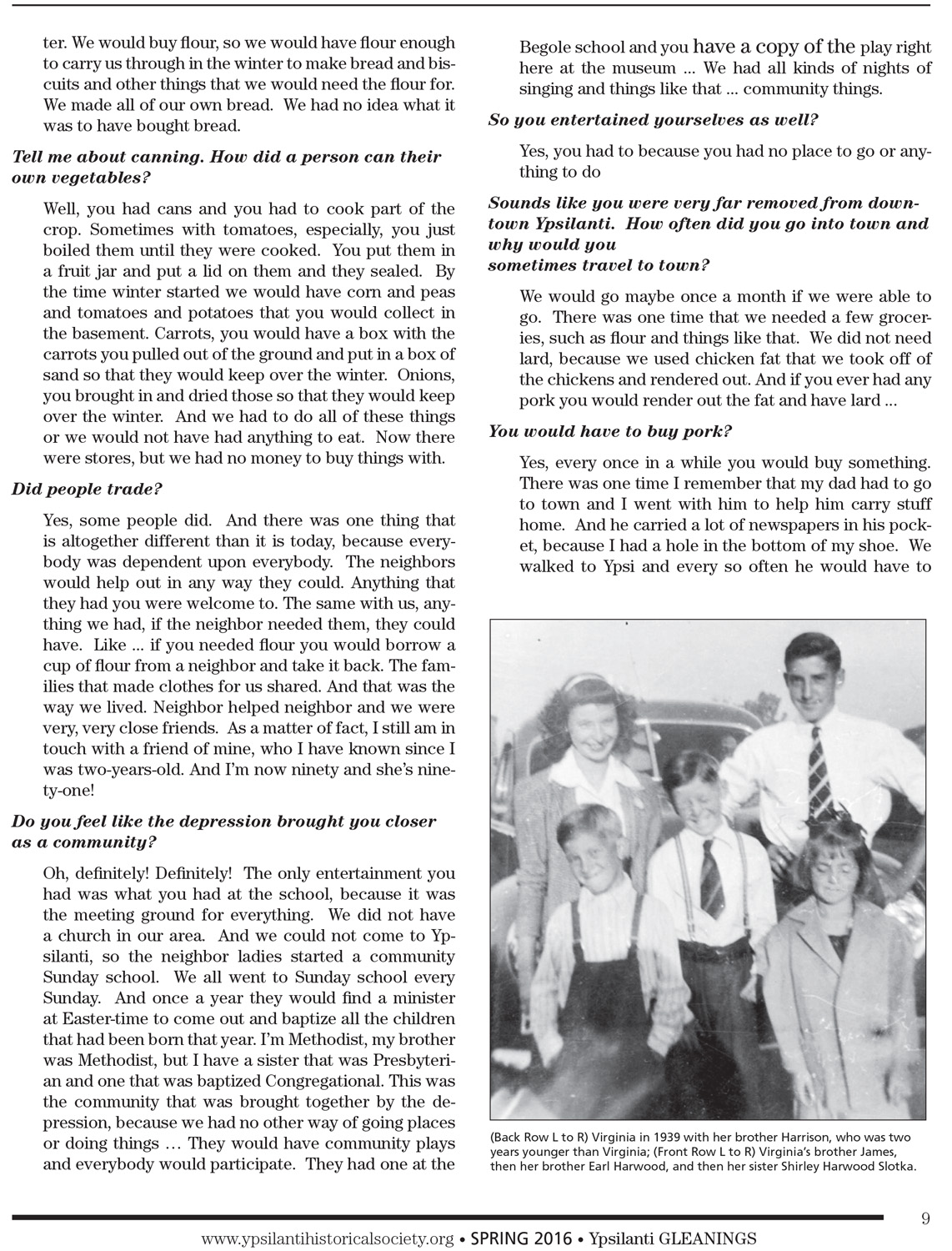 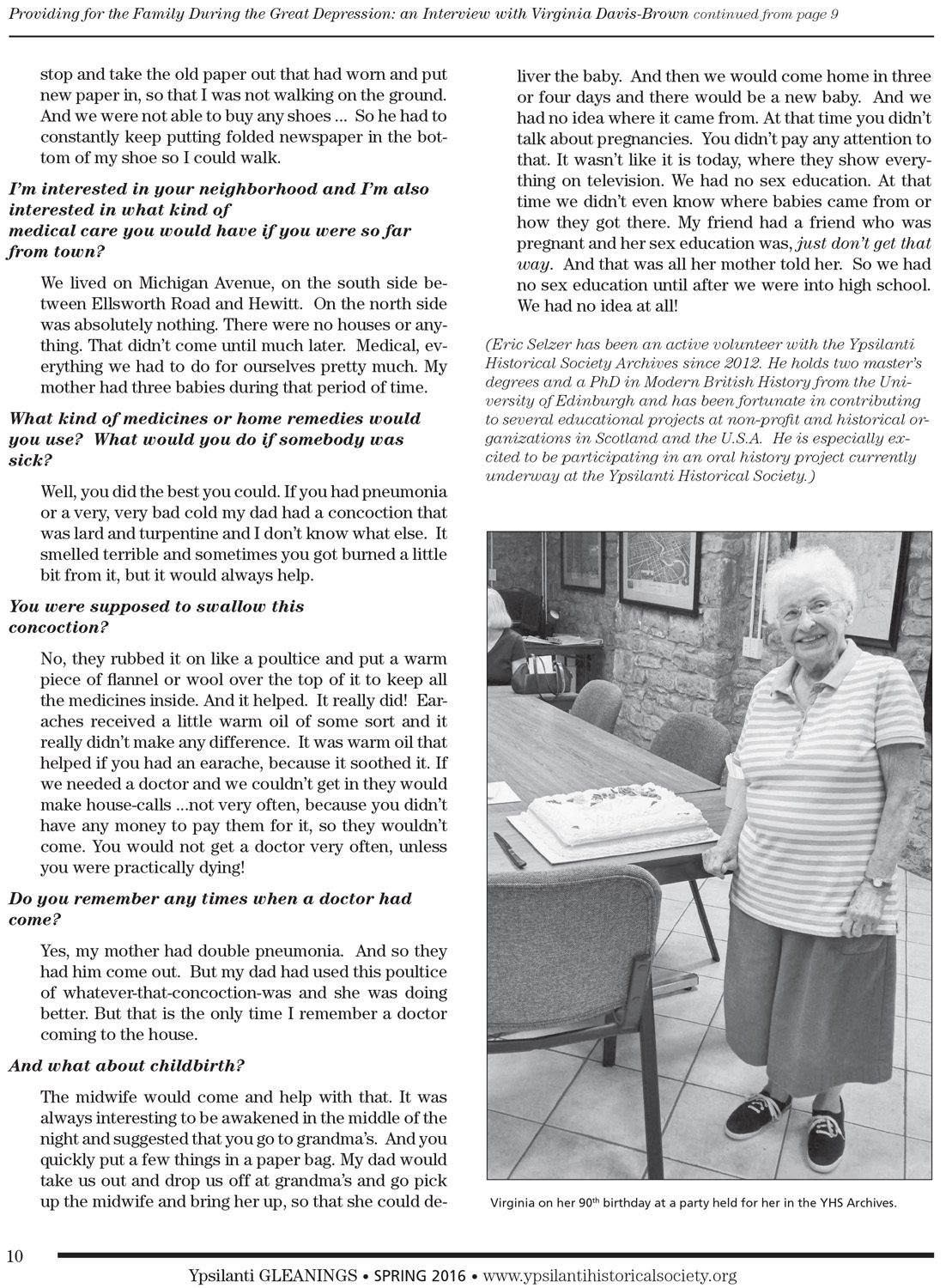 Virginia Davis Brown has been active with the Ypsilanti Historical Society since 1980. She has served as a volunteer and been a member of the Board of Trustees for over four decades. She was born in Washtenaw County in 1925 and grew up in the 1930s, during the height of the Great Depression. Last autumn, Mrs. Davis-Brown discussed some of her most vivid childhood memories in a tape-recorded interview that is currently on file in the Society Archives in conjunction with an ongoing oral-history project.

Virginia, could you tell me a little bit about your home life experience?

My dad, Frank Jr., was a builder and worked on several buildings in the Ypsilanti area. He helped build the Huron Hotel. He was not wealthy, but had enough that we could build a house. So he bought property out on Michigan Avenue near Hewitt Road and built a house, never completing it, because when the depression came the banks closed and there was no money. He had absolutely no money, no job, and did not work for two years. He had children to keep fed and warm ... And so, we had to grow our own vegetables, our own food. We always had chickens, so we always had eggs. My dad went hunting almost every day for food and he would come home with squirrels and rabbits and raccoons and my mother, Helen, would can them. There were not that many deer in this area ... but the everyday things were the rabbits and the squirrels and the raccoons. And my mother would can anything that he brought home, so we would have enough food to carry us through in the winter, because there was no money
for food. There was no way of getting [food] except walking the two miles into Ypsi to buy the necessary things that we could not raise on our own.

There also were men who walked up Michigan Avenue coming from Chicago and going to Detroit that had no food and they would stop at certain houses. My mother always had an egg sandwich for them and they always said, “thank you,” and wanted to help. Sometimes they’d see if they could help do something around the house to pay for what they had received and then they would continue on their way. They always said, “thank you.” They were always very, very polite. My dad eventually lost the house. He borrowed money on it and was not able to pay it back and so they foreclosed and we had to move.

What sort of attempts did your father make to find employment during those two years?

Well, he tried a lot of different places, but there were just no jobs for anybody. The government was just starting with the Works Progress Administration and he did apply for that, but did not take it. He was a builder and so if he was not out hunting, he was out collecting willow and made furniture. He had a few nails and we had all kinds of furniture. He sold some, but not much because not many people had money. But he was very, very busy trying to keep up with the garden. And we had to grow enough food to carry us through the winter. We would buy flour, so we would have flour enough to carry us through in the winter to make bread and biscuits and other things that we would need the flour for. We made all of our own bread. We had no idea what it was to have bought bread.