Area Digs Itself Out Of Worst Storm Of Season; 5 1/2 Inches Fall 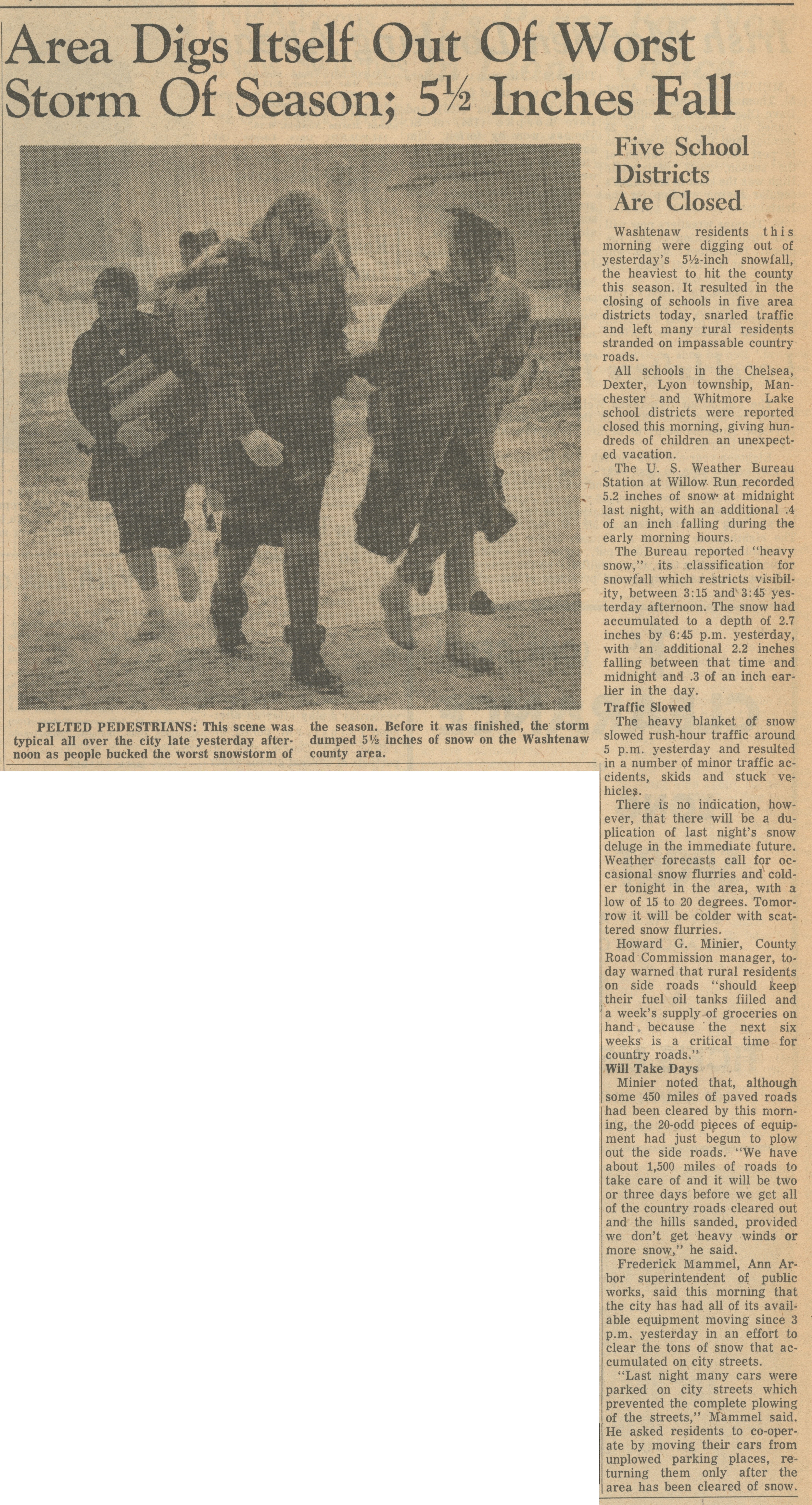 ﻿Area Digs Itself Out Of Worst Storm Of Season; 5 1/2 Inches Fall

Washtenaw residents this morning were digging out of yesterday’s 5 1/2-inch snowfall, the heaviest to hit the county this season. It resulted in the closing of schools in five area districts today, snarled traffic and left many rural residents stranded on impassable country roads.

All schools in the Chelsea, Dexter, Lyon township, Manchester and Whitmore Lake school districts were reported closed this morning, giving hundreds of children an unexpected vacation.

The U. S. Weather Bureau Station at Willow Run recorded 5.2 inches of snow at midnight last night, with an additional .4 of an inch falling during the early morning hours.

The Bureau reported “heavy snow,” its classification for snowfall which restricts visibility, between 3:15 and 3:45 yesterday afternoon. The snow had accumulated to a depth of 2.7 inches by 6:45 p.m. yesterday, with an additional 2.2 inches falling between that time and midnight and .3 of an inch earlier in the day.

The heavy blanket of snow slowed rush-hour traffic around 5 p.m. yesterday and resulted in a number of minor traffic accidents, skids and stuck vehicles.

There is no indication, however, that there will be a duplication of last night’s snow deluge in the immediate future. Weather forecasts call for occasional snow flurries and colder tonight in the area, with a low of 15 to 20 degrees. Tomorrow it will be colder with scattered snow flurries.

Howard G. Minier, County Road Commission manager, today warned that rural residents on side roads “should keep their fuel oil tanks filled and a week’s supply of groceries on hand because the next six weeks is a critical time for country roads.”

Minier noted that, although some 450 miles of paved roads had been cleared by this morning, the 20-odd pieces of equipment had just begun to plow out the side roads. “We have about 1,500 miles of roads to take care of and it will be two or three days before we get all of the country roads cleared out and the hills sanded, provided we don’t get heavy winds or more snow,” he said.

Frederick Mammel, Ann Arbor superintendent of public works, said this morning that the city has had all of its available equipment moving since 3 p.m. yesterday in an effort to clear the tons of snow that accumulated on city streets.

“Last night many cars were parked on city streets which prevented the complete plowing of the streets,” Mammel said. He asked residents to co-operate by moving their cars from unplowed parking places, returning them only after the area has been cleared of snow.

PELTED PEDESTRIANS: This scene was typical all over the city late yesterday afternoon as people bucked the worst snowstorm of the season. Before it was finished, the storm dumped 5 1/2 inches of snow on the Washtenaw county area.