Burning Of The Mortgage 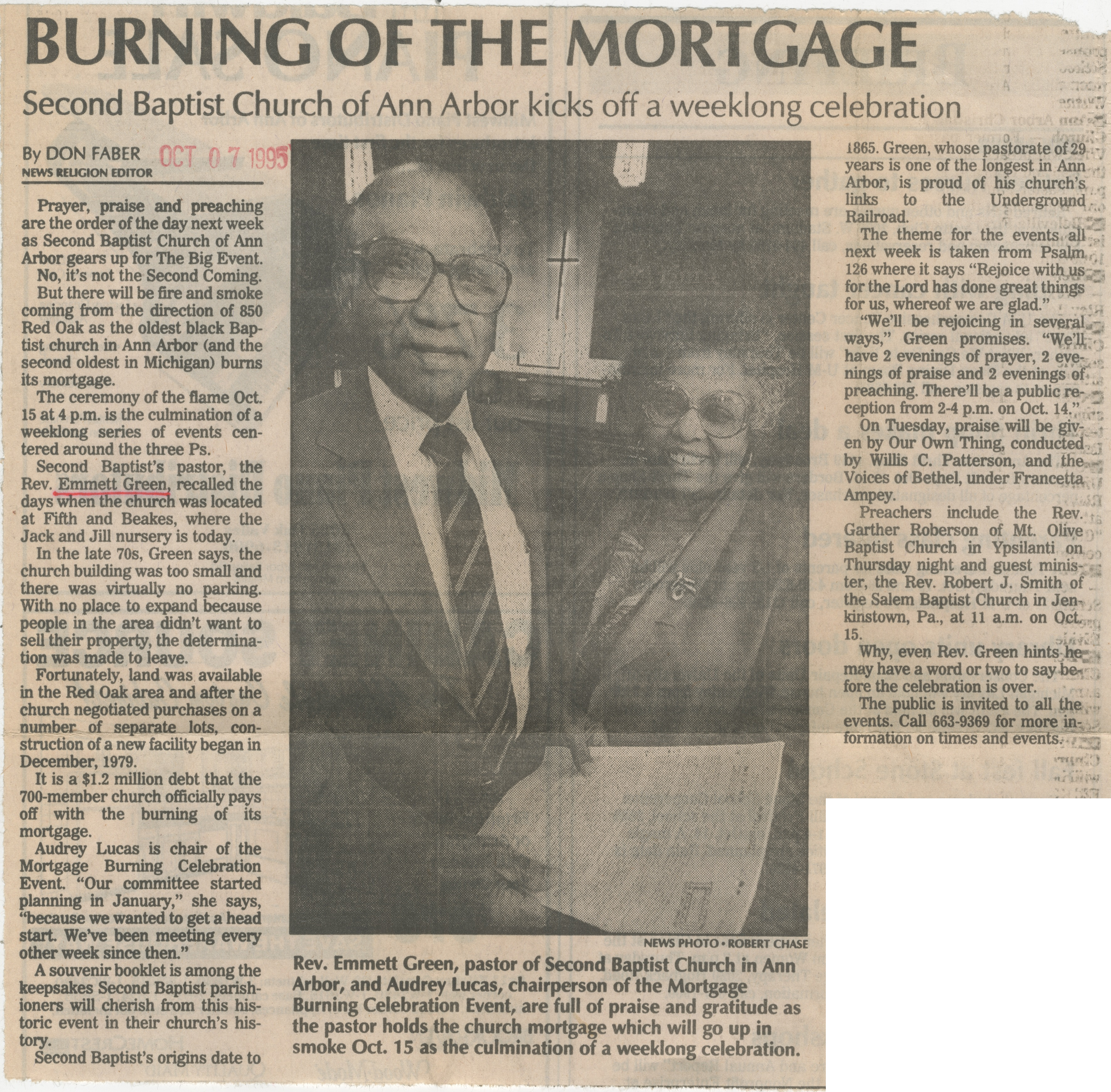 ﻿BURNING OF THE MORTGAGE

Prayer, praise and preaching are the order of the day next week as Second Baptist Church of Ann Arbor gears up for The Big Event.

No, it’s not the Second Coming.

But there will be fire and smoke coming from the direction of 850 Red Oak as the oldest black Baptist church in Ann Arbor (and the second oldest in Michigan) burns its mortgage.

The ceremony of the flame Oct 15 at 4 p.m. is the culmination of a weeklong series of events centered around the three Ps.

Second Baptist’s pastor, the Rev. Emmett Green, recalled the days when the church was located at Fifth and Beakes, where the Jack and Jill nursery is today.

In the late 70s, Green says, the church building was too small and there was virtually no parking. With no place to expand because people in the area didn’t want to sell their property, the determination was made to leave.

Fortunately, land was available in the Red Oak area and after the church negotiated purchases on a number of separate lots, construction of a new facility began in December, 1979.

It is a $1.2 million debt that the 700-member church officially pays off with the burning of its mortgage.

Audrey Lucas is chair of the Mortgage Burning Celebration Event. “Our committee started planning in January,” she says, “because we wanted to get a head start. We’ve been meeting every other week since then.”

A souvenir booklet is among the keepsakes Second Baptist parishioners will cherish from this historic event in their church’s history.

Second Baptist’s origins date to 1865. Green, whose pastorate of 29 years is one of the longest in Ann Arbor, is proud of his church’s links to the Underground Railroad.

The theme for the events all next week is taken from Psalm 126 where it says “Rejoice with us, for the Lord has done great things for us, whereof we are glad.”

On Tuesday, praise will be given by Our Own Thing, conducted by Willis C. Patterson, and the Voices of Bethel, under Francetta Ampey.

Why, even Rev. Green hints he may have a word or two to say before the celebration is over.

The public is invited to all the events. Call 663-9369 for more information on times and events.

NEWS PHOTO
ROBERT CHASE
Rev. Emmett Green, pastor of Second Baptist Church in Ann Arbor, and Audrey Lucas, chairperson of the Mortgage Burning Celebration Event, are full of praise and gratitude as the pastor holds the church mortgage which will go up in smoke Oct. 15 as the culmination of a weeklong celebration.