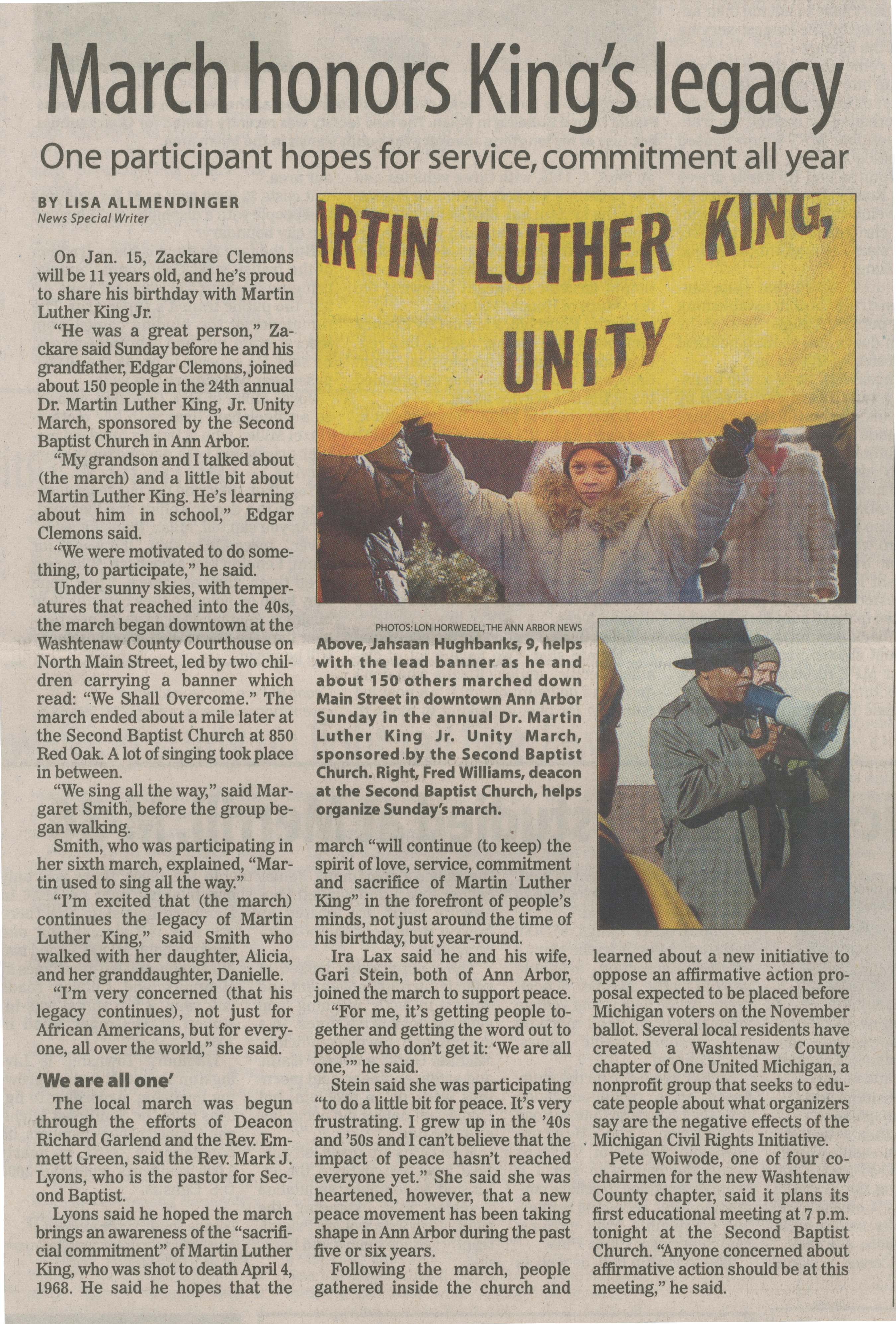 One participant hopes for service, commitment all year

On Jan. 15, Zackare Clemons will be 11 years old, and he’s proud to share his birthday with Martin Luther King Jr.

“He was a great person,” Zackare said Sunday before he and his grandfather, Edgar Clemons, joined about 150 people in the 24th annual Dr. Martin Luther King, Jr. Unity March, sponsored by the Second Baptist Church in Ann Arbor.

“My grandson and I talked about (the march) and a little bit about Martin Luther King. He’s learning about him in school,” Edgar Clemons said.

“We were motivated to do something, to participate,” he said.

Under sunny skies, with temperatures that reached into the 40s, the march began downtown at the Washtenaw County Courthouse on North Main Street, led by two children carrying a banner which read: “We Shall Overcome.” The march ended about a mile later at the Second Baptist Church at 850 Red Oak. A lot of singing took place in between.

“We sing all the way,” said Margaret Smith, before the group began walking.

Smith, who was participating in her sixth march, explained, “Martin used to sing all the way.”

“I’m excited that (the march) continues the legacy of Martin Luther King,” said Smith who walked with her daughter, Alicia, and her granddaughter, Danielle.

“I’m very concerned (that his legacy continues), not just for African Americans, but for everyone, all over the world,” she said.

The local march was begun through the efforts of Deacon Richard Garlend and the Rev. Emmett Green, said the Rev. Mark J. Lyons, who is the pastor for Second Baptist.

Lyons said he hoped the march brings an awareness of the “sacrificial commitment” of Martin Luther King, who was shot to death April 4, 1968. He said he hopes that the

march “will continue (to keep) the spirit of love, service, commitment and sacrifice of Martin Luther King” in the forefront of people’s minds, not just around the time of his birthday, but year-round.

Ira Lax said he and his wife, Gari Stein, both of Ann Arbor, joined the march to support peace.

“For me, it’s getting people together and getting the word out to people who don’t get it: ‘We are all one,”’ he said.

Stein said she was participating “to do a little bit for peace. It’s very frustrating. I grew up in the ’40s and ’50s and I can’t believe that the . impact of peace hasn’t reached everyone yet.” She said she was heartened, however, that a new peace movement has been taking shape in Ann Arbor during the past five or six years.

Following the march, people gathered inside the church and learned about a new initiative to oppose an affirmative action proposal expected to be placed before Michigan voters on the November ballot. Several local residents have created a Washtenaw County chapter of One United Michigan, a nonprofit group that seeks to educate people about what organizers say are the negative effects of the Michigan Civil Rights Initiative.

Pete Woiwode, one of four co-chairmen for the new Washtenaw County chapter, said it plans its first educational meeting at 7 p.m. tonight at the Second Baptist Church. “Anyone concerned about affirmative action should be at this meeting,” he said.