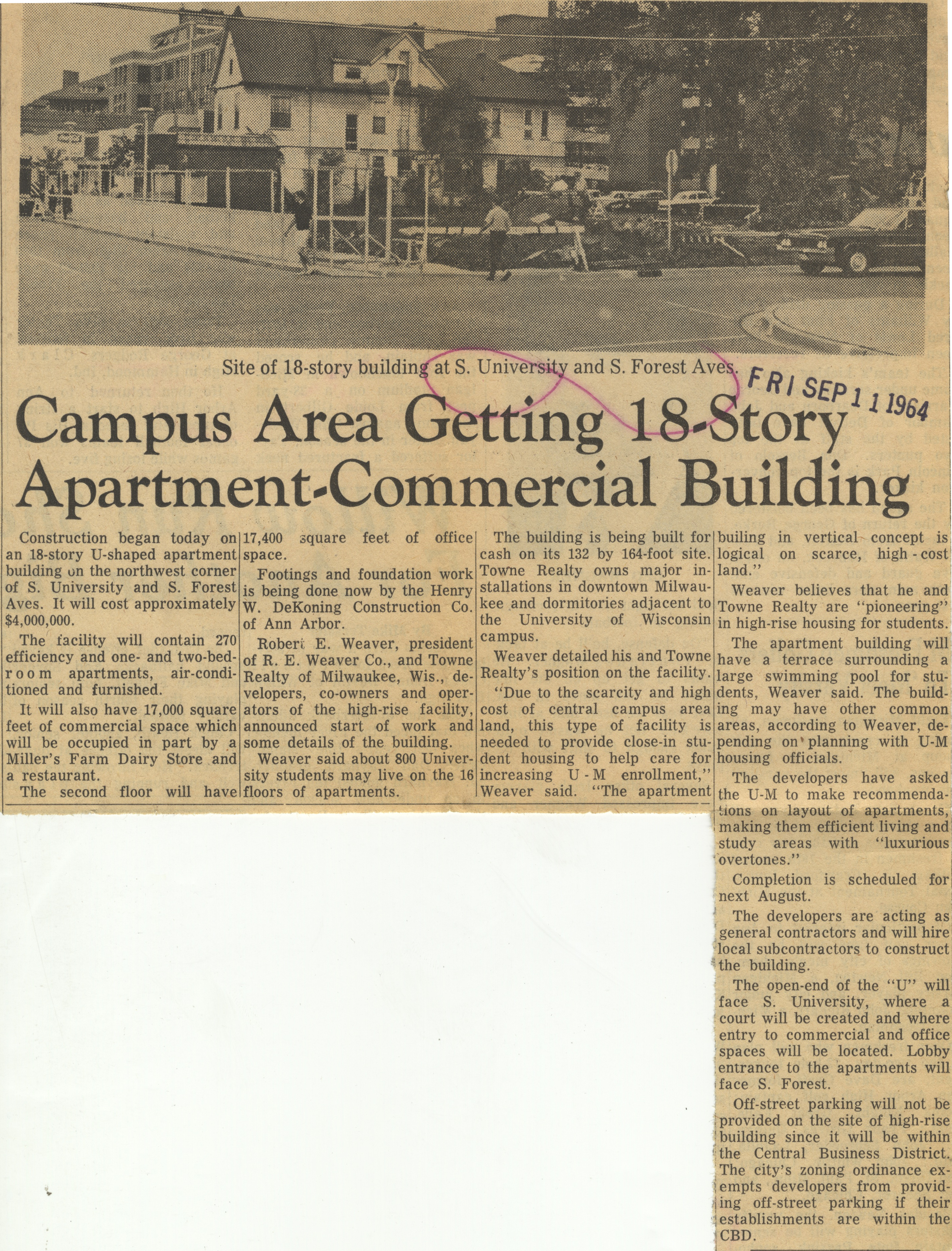 Construction began today on an 18-story U-shaped apartment building on the northwest corner of S. University and S. Forest Aves. It will cost approximately $4,000,000.

The facility will contain 270 efficiency and one- and two-bed-room apartments, air-conditioned and furnished.

It will also have 17,000 square feet of commercial space which will be occupied in part by a Miller’s Farm Dairy Store and a restaurant.

The second floor will have 17,400 square feet of office space.

Footings and foundation work is being done now by the Henry W. DeKoning Construction Co. of Ann Arbor.

Robert E. Weaver, president of R. E. Weaver Co., and Towne Realty of Milwaukee, Wis., developers, co-owners and operators of the high-rise facility, announced start of work and some details of the building.

Weaver said about 800 University students may live on the 16 floors of apartments.

The building is being built for cash on its 132 by 164-foot site. Towne Realty owns major installations in downtown Milwaukee and dormitories adjacent to the University of Wisconsin campus.

Weaver detailed his and Towne Realty’s position on the facility.

“Due to the scarcity and high cost of central campus area land, this type of facility is needed to provide close-in student housing to help care for increasing U-M enrollment,’’ Weaver said. “The apartment building in vertical concept is logical on scarce, high - cost land.”

Weaver believes that he and Towne Realty are “pioneering” in high-rise housing for students.

The apartment building will have a terrace surrounding a large swimming pool for students, Weaver said. The building may have other common areas, according to Weaver, depending on planning with U-M housing officials.

The developers have asked the U-M to make recommendations on layout of apartments, making them efficient living and study areas with "luxurious overtones.”

Completion is scheduled for next August.

The developers are acting as general contractors and will hire local subcontractors to construct the building.

The open-end of the “U” will face S. University, where a court will be created and where entry to commercial and office spaces will be located. Lobby entrance to the apartments will face S. Forest.