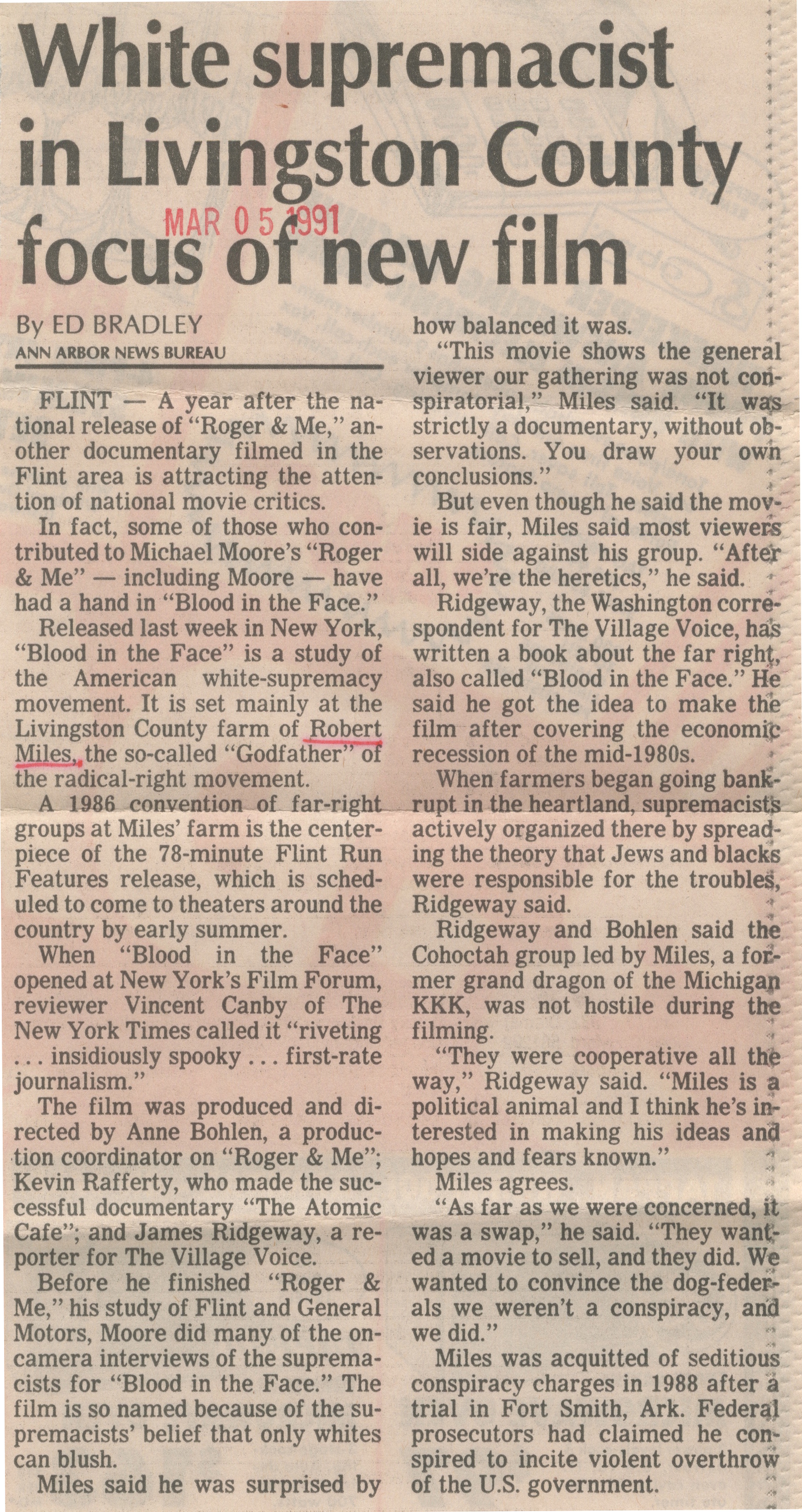 FLINT — A year after the national release of "Roger & Me,” another documentary filmed in the Flint area is attracting the attention of national movie critics.

In fact, some of those who contributed to Michael Moore’s “Roger & Me” — including Moore — have had a hand in “Blood in the Face.”

Released last week in New York, “Blood in the Face” is a study of the American white-supremacy movement. It is set mainly at the Livingston County farm of Robert Miles, the so-called “Godfather of the radical-right movement.

A 1986 convention of far-right groups at Miles’ farm is the centerpiece of the 78-minute Flint Run Features release, which is scheduled to come to theaters around the country by early summer.

The film was produced and directed by Anne Bohlen, a production coordinator on “Roger & Me”; Kevin Rafferty, who made the successful documentary “The Atomic Cafe”; and James Ridgeway, a reporter for The Village Voice.

Before he finished “Roger & Me,” his study of Flint and General Motors, Moore did many of the on-camera interviews of the supremacists for “Blood in the Face.” The film is so named because of the supremacists’ belief that only whites can blush.

Miles said he was surprised by how balanced it was.

“This movie shows the general viewer our gathering was not conspiratorial,” Miles said. “It was strictly a documentary, without observations. You draw your own conclusions.”

But even though he said the movie is fair, Miles said most viewers will side against his group. “After all, we’re the heretics,” he said.

Ridgeway, the Washington correspondent for The Village Voice, has written a book about the far right, also called “Blood in the Face.” He said he got the idea to make the film after covering the economic recession of the mid-1980s.

When farmers began going bankrupt in the heartland, supremacists actively organized there by spreading the theory that Jews and blacks were responsible for the troubles, Ridgeway said.

Ridgeway and Bohlen said the Cohoctah group led by Miles, a former grand dragon of the Michigan KKK, was not hostile during the filming.

“They were cooperative all thfe way,” Ridgeway said. “Miles is a political animal and I think he’s interested in making his ideas and hopes and fears known.”

“As far as we were concerned, it was a swap,” he said. “They wanted a movie to sell, and they did. We wanted to convince the dog-federals we weren’t a conspiracy, and we did.”

Miles was acquitted of seditious conspiracy charges in 1988 after a trial in Fort Smith, Ark. Federal prosecutors had claimed he conspired to incite violent overthrow of the U.S. government.