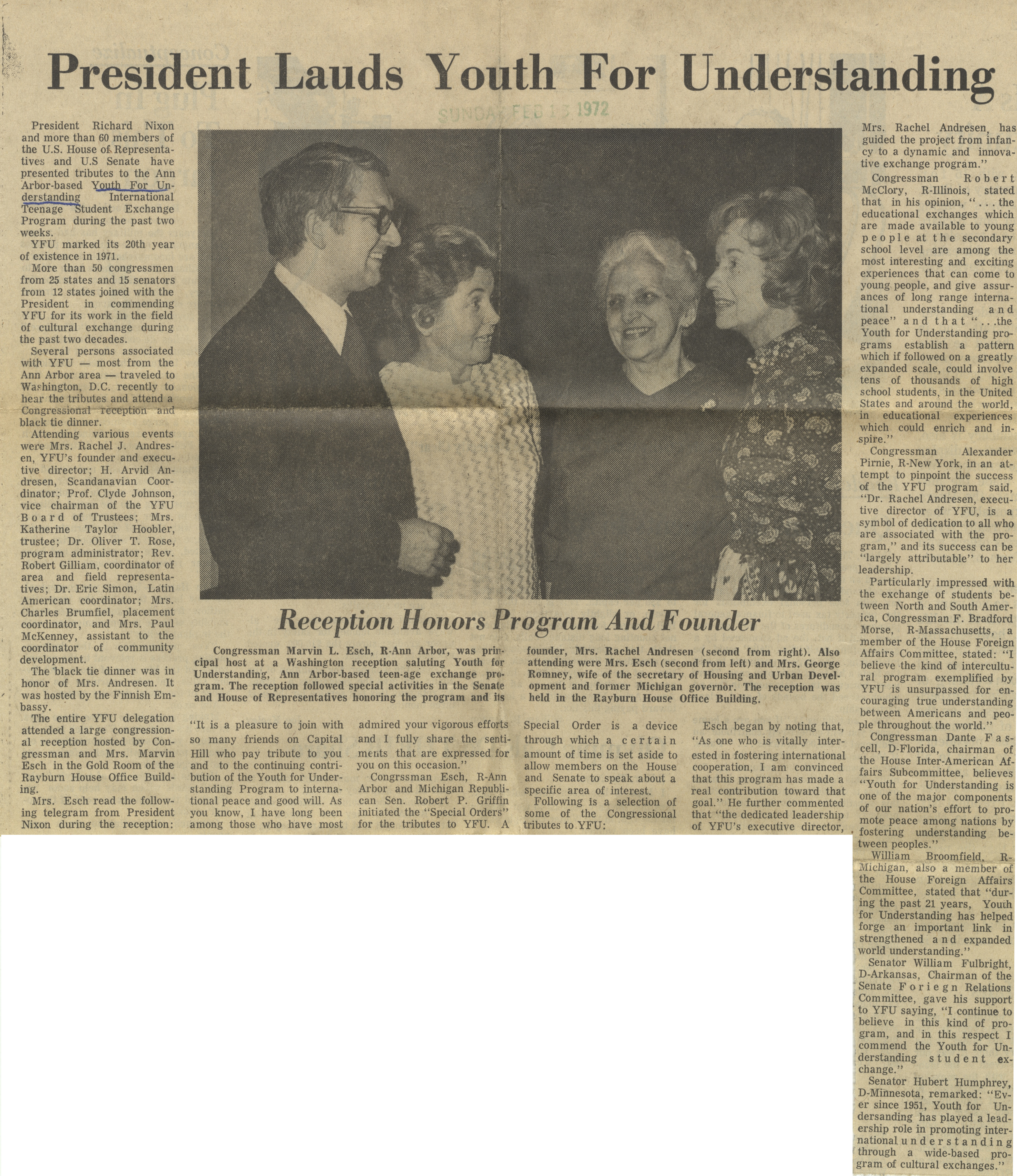 Congressman Marvin L. Esch, R-Ann Arbor, was principal host at a Washington reception saluting Youth for Understanding, Ann Arbor-based teen-age exchange program. The reception followed special activities in the Senate and House of Representatives honoring the program and its founder, Mrs. Rachel Andresen (second from right). Also attending were Mrs. Esch (second from left) and Mrs. George Romney, wife of the secretary of Housing and Urban Development and former Michigan governor. The reception was held in the Rayburn House Office Building.

President Richard Nixon and more than 60 members of the U.S. House of. Representatives and U.S Senate have presented tributes to the Ann Arbor-based Youth For Understanding International Teenage Student Exchange Program during the past two weeks.

More than 50 congressmen from 25 states and 15 senators from 12 states joined with the President in commending YFU for its work in the field of cultural exchange during the past two decades.

Several persons associated with YFU — most from the Ann Arbor area — traveled to Washington, D.C. recently to hear the tributes and attend a Congressional-reception and black tie dinner.

The black tie dinner was in honor of Mrs. Andresen. It was hosted by the Finnish Embassy.

The entire YFU delegation attended a large congressional reception hosted by Congressman and Mrs. Marvin Esch in the Gold Room of the Rayburn House Office Building.

Mrs. Esch read the following telegram from President Nixon during the reception:

“It is a pleasure to join with so many friends on Capital Hill who pay tribute to you and to the continuing contribution of the Youth for Understanding Program to international peace and good will. As you know, I have long been among those who have most admired your vigorous efforts and I fully share the sentiments that are expressed for you on this occasion.”

Congressman Esch, R-Ann Arbor and Michigan Republican Sen. Robert P. Griffin initialed the “Special Orders” for the tributes to YFU. A Special Order is a device through which a certain amount of time is set aside to allow members on the House and Senate to speak about a specific area of interest.

Following is a selection of some of the Congressional tributes to YFU:

Esch began by noting that, “As one who is vitally interested in fostering international cooperation, I am convinced that this program has made a real contribution toward that goal.” He further commented that “the dedicated leadership of YFU’s executive director,

Mrs. Rachel Andresen, has guided the project from infancy to a dynamic and innovative exchange program.”

Congressman Robert McClory, R-Illinois, stated that in his opinion, “... the educational exchanges which are made available to young people at the secondary school level are among the most interesting and exciting experiences that can come to young people, and give assurances of long range international understanding and peace” and that “ ...the Youth for Understanding programs establish a pattern which if followed on a greatly expanded scale, could involve tens of thousands of high school students, in the United States and around the world, in educational experiences which could enrich and inspire.”

Congressman Alexander Pirnie, R-New York, in an attempt to pinpoint the success of the YFU program said, “Dr. Rachel Andresen, executive director of YFU, is a symbol of dedication to all who are associated with the program,” and its success can be “largely attributable” to her leadership.

Particularly impressed with the exchange of students between North and South America, Congressman F. Bradford Morse, R-Massachusetts, a member of the House Foreign Affairs Committee, stated: "I believe the kind of intercultural program exemplified by YFU is unsurpassed for encouraging true understanding between Americans and people throughout the world.”

Congressman Dante Fascell, D-Florida, chairman of the House Inter-American Affairs Subcommittee, believes “Youth for Understanding is one of the major components of our nation’s effort to promote peace among nations by ’ fostering understanding between peoples.”

William Broomfield. R-Michigan, also a member of the House Foreign Affairs Committee, stated that “during the past 21 years, Youth for Understanding has helped forge an important link in strengthened and expanded world understanding.”

Senator William Fulbright, D-Arkansas, Chairman of the Senate Foreign Relations Committee, gave his support to YFU saying, “I continue to believe in this kind of program, and in this respect I commend the Youth for Understanding student exchange.”

Senator Hubert Humphrey, D-Minnesota, remarked: “Ever since 1951, Youth for Understanding has played a leadership role in promoting international understanding through a wide-based program of cultural exchanges.”