The first weekend of Cinetopia is over and I saw eight films in total. Sure, that’s more than the average person sees in a weekend but far fewer than the 400 seen by the programming team to select the 68 that make up the festival. Deciding what to see was difficult, and with so many intriguing options I often just chose on a whim. While I found something to admire in all that I saw, I really want to tell you about two of my favorites. 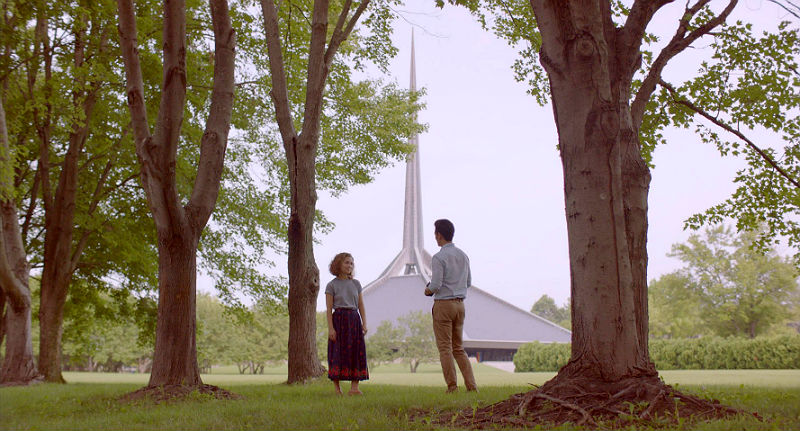 Columbus muses on architecture, parental relationships, and finding beauty wherever you may be.

Columbus
Columbus is not for everyone. This was made quite clear when the woman in front of me turned around as the credits rolled and asked, “Well, did you get it?” The man to my right responded, “Give me a minute.” To be fair, there was a key piece of dialogue he discovered he had missed. But that’s how this movie goes. It’s contemplative and quiet, with dialogue that muses on architecture, parental relationships, and how to find beauty in the places around you.

I cannot wait for Haley Lu Richardson to be a star (you may recognize her as the best friend in The Edge of Seventeen), and John Cho deserves every lead role he can muster. The pair’s subtle acting leads you to watch their every move for insight into their internal lives. Richardson’s Casey shelves books at the local library (a girl after my own heart) and fears leaving her mother, who is a recovering meth addict. As Casey says in the film, her hometown of Columbus, Indiana, is known for “meth and modernism,” and she has found solace in interpreting the buildings around her. Cho’s Jin is brought to Columbus when his father, an architect, collapses before he is scheduled to speak. Jin is left in limbo as his elderly father remains in a coma and he must wait to discover what the outcome will be. Jin and Casey meet and, as happens in movies, help each other uncover something greater about themselves as Casey shares her appreciation for architecture while Jin encourages her to take steps forward.

Each frame of the film is chocked full of interest. Being about architecture, there are many long, sustained shots of buildings that ask you to look at and appreciate the space you inhabit. This movie is romantic, if not in the traditional sense. It urges you to recognize and value what is available around you. This point made all the more meaningful for us Midwesterners by being set in our region. 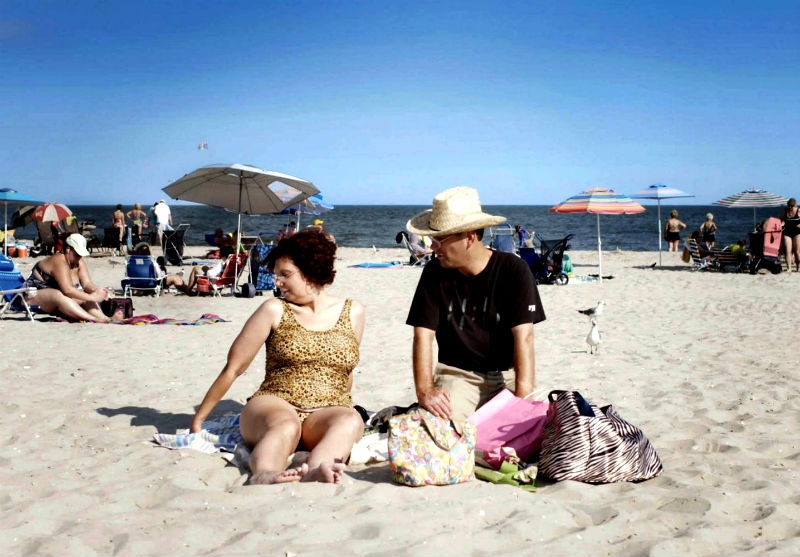 Dina and fiancé Scott in Dina.

Dina
Dina is the true story of a couple, Dina and Scott, preparing for their wedding. Both Dina and Scott are on the autism spectrum. The film looks beautiful, with a muted soft-color palette and a camera that primarily remains stationary, leaving viewers to simply observe what is within each shot. The story is sweet, the very opposite of documentaries that can so often be gritty and hard to swallow. That doesn’t mean it’s always easy, though. Dina and Scott have their own share of problems, and the trauma Dina has experienced in the past is slowly revealed throughout the film. But the couple is a model of how to communicate in a relationship, and their mutual respect and admiration for one another is unmistakable. They speak frankly about sex, love, and how to show affection for your partner. Warm, funny, and touching, I can’t imagine anyone wanting anything but the best for this couple. The movie won the U.S. Jury Prize for Documentary at the Sundance Film Festival this year, and even if you don’t make it to Cinetopia, there is a good change you may be seeing and hearing about Dina in the future.

As for the rest of the films I saw, I would recommend any, as I connected with all of them in one way or another, and was often left contemplating what I had just witnessed. In order of when I saw them:

The Hero is a fairly standard drama about an unlikely friendship forged between two people trying to find themselves and a peace of mind.

Band Aid is the story of a couple who decide to turn their fights into songs and, as a result, begin to talk about a pain in their past that they had been avoiding. The film is notable for its employment of only female crew members at a time when even a female director is rare in Hollywood. (The New York Times published a story about how that setting influenced the actors.)

12th and Clairmount looks back at the 1967 Detroit riots, whose 50th anniversary is July 23. The film works as an oral history of that time in the city, using home video footage, drawings, and recordings of those who were there. If you want to see how locals look back, watch this.

Patti Cake$ is the film you’ll be most likely seeing in the future as it’s set for a summer release by 20th Century Fox. Patti is a big girl from Jersey who dreams of making a name for herself as a rapper. A ragtag group comes together to try to make it happen.

Fraud is unlike any documentary you have seen before. And its status as a documentary has been disputed. Made from home video footage found on YouTube, it’s a meditation on American consumerism and film itself. You’ll leave the movie wanting to immediately to try to find out more about what you just watched.

Rat Film is about rats, but it’s also about a lot more than rodents. It’s about those who keep rats as pets, use them for experiments, make a living exterminating them, and hunt them. It’s also about systematic racism in the city of Baltimore. And video game glitches. Watch it and tell me what you think it’s about.

Katrina Shafer is a desk clerk with the Ann Arbor District Library.

There are still more screenings to come in Ann Arbor and around the Southeast Michigan area, including two encore screenings of films that have yet to be announced. You can check out the full schedule here. To read our Cinetopia 2017 preview, which includes recommendations from the festival's programmers, click here.