Next Week's Eclipse 1 Of 3 Due This Century 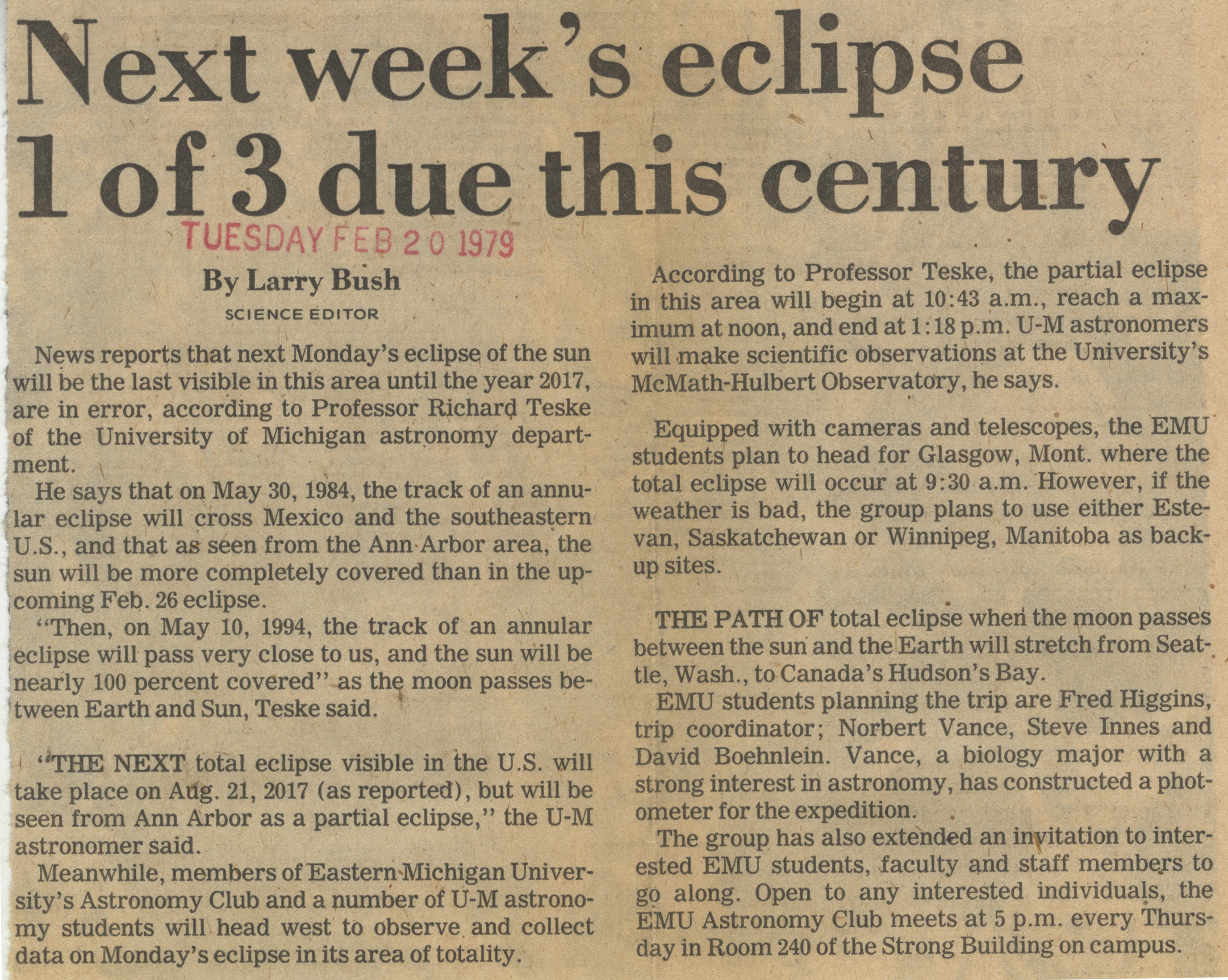 ﻿Next week’s eclipse 1 of 3 due this century

News reports that next Monday’s eclipse of the sun will be the last visible in this area until the year 2017, are in error, according to Professor Richard Teske of the University of Michigan astronomy department.

He says that on May 30,1984, the track of an annular eclipse will cross Mexico and the southeastern U.S., and that as seen from the Ann Arbor area, the sun will be more completely covered than in the upcoming Feb. 26 eclipse.

“Then, on May 10, 1994, the track of an annular eclipse will pass very close to us, and the sun wall be nearly 100 percent covered” as the moon passes between Earth and Sun, Teske said.

“THE NEXT total eclipse visible in the U.S. will take place on Aug. 21, 2017 (as reported), but will be seen from Ann Arbor as a partial eclipse,” the U-M astronomer said.

Meanwhile, members of Eastern Michigan University’s Astronomy Club and a number of U-M astronomy students will head west to observe and collect data on Monday’s eclipse in its area of totality.

According to Professor Teske, the partial eclipse in this area will begin at 10:43 a.m., reach a maximum at noon, and end at 1:18 p.m. U-M astronomers will make scientific observations at the University’s McMath-Hulbert Observatory, he says.

Equipped with cameras and telescopes, the EMU students plan to head for Glasgow, Mont. where the total eclipse will occur at 9:30 a.m. However, if the weather is bad, the group plans to use either Estevan, Saskatchewan or Winnipeg, Manitoba as backup sites.

THE PATH OF total eclipse when the moon passes between the sun and the Earth will stretch from Seattle, Wash., to Canada’s Hudson’s Bay.

EMU students planning the trip are Fred Higgins, trip coordinator; Norbert Vance, Steve Innes and David Boehnlein. Vance, a biology major with a strong interest in astronomy, has constructed a photometer for the expedition.

The group has also extended an invitation to interested EMU students, faculty and staff members to go along. Open to any interested individuals, the EMU Astronomy Club meets at 5 p.m. every Thursday in Room 240 of the Strong Building on campus.