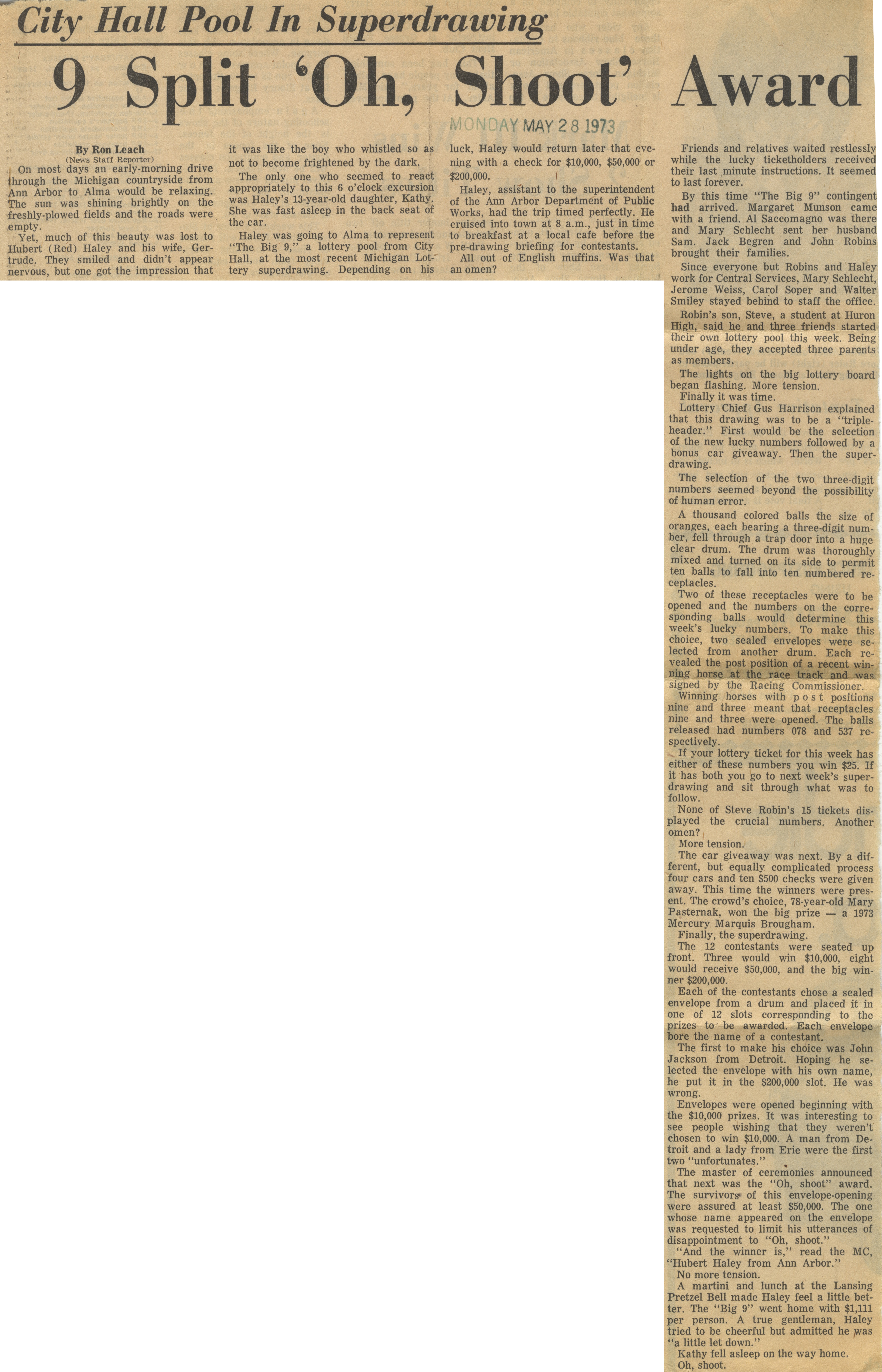 On most days an early-morning drive through the Michigan countryside from Ann Arbor to Alma would be relaxing. The sun was shining brightly on the freshly-plowed fields and the roads were empty.

Yet, much of this beauty was lost to Hubert (Red) Haley and his wife, Gertrude. They smiled and didn’t appear nervous, but one got the impression that it was like the boy who whistled so as not to become frightened by the dark.

The only one who seemed to react appropriately to this 6 o’clock excursion was Haley’s 13-year-old daughter, Kathy. She was fast asleep in the back seat of the car.

Haley was going to Alma to represent “The Big 9,” a lottery pool from City Hall, at the most recent Michigan Lottery superdrawing. Depending on his luck, Haley would return later that evening with a check for $10,000, $50,000 or $200,000.

Haley, assistant to the superintendent of the Ann Arbor Department of Public Works, had the trip timed perfectly. He cruised into town at 8 a.m., just in time to breakfast at a local cafe before the pre-drawing briefing for contestants.

All out of English muffins. Was that an omen?

Friends and relatives waited restlessly while the lucky ticketholders received their last minute instructions. It seemed to last forever.

By this time “The Big 9” contingent had arrived. Margaret Munson came with a friend. Al Saccomagno was there and Mary Schlecht sent her husband Sam. Jack Begren and John Robins brought their families.

Since everyone but Robins and Haley work for Central Services, Mary Schlecht, Jerome Weiss, Carol Soper and Walter Smiley stayed behind to staff the office.

Robin’s son, Steve, a student at Huron High, said he and three friends started their own lottery pool this week. Being under age, they accepted three parents as members.

The lights on the big lottery board began flashing. More tension.

Finally it was time.

Lottery Chief Gus Harrison explained that this drawing was to be a “tripleheader.” First would be the selection of the new lucky numbers followed by a bonus car giveaway. Then the superdrawing.

The selection of the two three-digit numbers seemed beyond the possibility of human error.

A thousand colored balls the size of oranges, each bearing a three-digit number, fell through a trap door into a huge clear drum. The drum was thoroughly mixed and turned on its side to permit ten balls to fall into ten numbered receptacles.

Two of these receptacles were to be opened and the numbers on the corresponding balls would determine this week’s lucky numbers. To make this choice, two sealed envelopes were selected from another drum. Each revealed the post position of a recent winning horse at the race track and was signed by the Racing Commissioner.

If your lottery ticket for this week has either of these numbers you win $25. If it has both you go to next week’s superdrawing and sit through what was to follow.

None of Steve Robin's 15 tickets displayed the crucial numbers. Another omen?

The car giveaway was next. By a different, but equally complicated process four cars and ten $500 checks were given away. This time the winners were present. The crowd’s choice, 78-year-old Mary Pasternak, won the big prize — a 1973 Mercury Marquis Brougham.

Each of the contestants chose a sealed envelope from a drum and placed it in one of 12 slots corresponding to the prizes to be awarded. Each envelope bore the name of a contestant.

The first to make his choice was John Jackson from Detroit. Hoping he selected the envelope with his own name, he put it in the $200,000 slot. He was wrong.

Envelopes were opened beginning with the $10,000 prizes. It was interesting to see people wishing that they weren’t chosen to win $10,000. A man from Detroit and a lady from Erie were the first two “unfortunates.”

The master of ceremonies announced that next was the “Oh, shoot” award. The survivors' of this envelope-opening were assured at least $50,000. The one whose name appeared on the envelope was requested to limit his utterances of disappointment to “Oh, shoot.”

“And the winner is,” read the MC, “Hubert Haley from Ann Arbor.”

A martini and lunch at the Lansing Pretzel Bell made Haley feel a little better. The “Big 9” went home with $1,111 per person. A true gentleman, Haley tried to be cheerful but admitted he was “a little let down.”