20 years after murder, victim's father can talk about tragedy 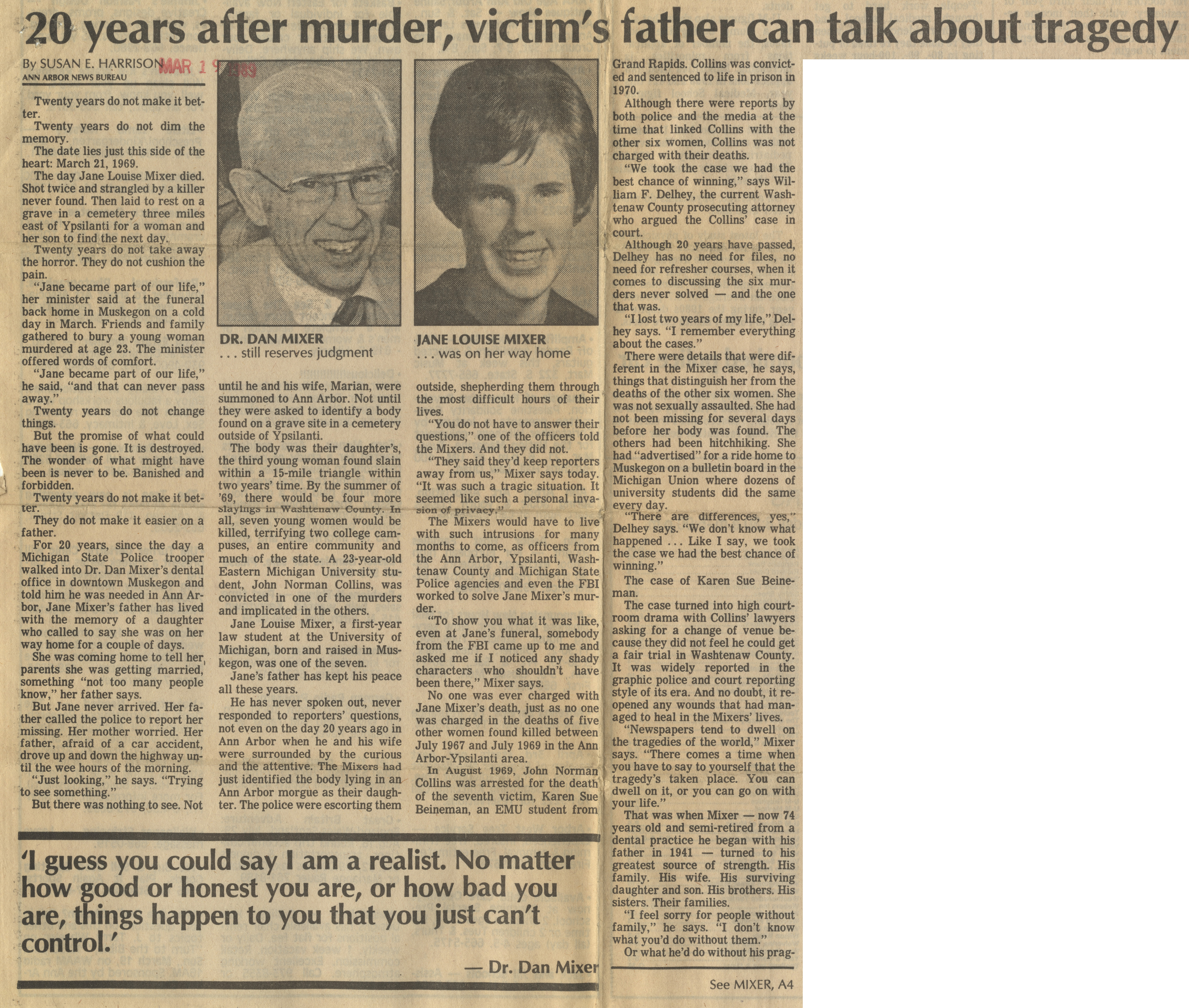 20 years after murder, victim's father can talk about tragedy

Twenty years do not make it better.

Twenty years do not dim the memory.

The day Jane Louise Mixer died. Shot twice and strangled by a killer never found. Then laid to rest on a grave in a cemetery three miles east of Ypsilanti for a woman and her son to find the next day.

Twenty years do not take away the horror. They do not cushion the pain.

"Jane became part of our life," her minister said at the funeral back home in Muskegon on a cold day in March. Friends and family gathered to bury a young woman murdered at age 23. The minster offered words of comfort.

"Jane became part of our life," he said, "and that can never pass away."

Twenty years do not change things.

But the promise of what could have been is gone. It is destroyed. The wonder of what might have been is never to be. Banished and forbidden.

Twenty years do not make it better.

They do not make it easier on a father.

For 20 years, since the day a Michigan State Police trooper walked into Dr. Dan Mixer's dental office in downtown Muskegon and told him he was needed in Ann Arbor, Jane Mixer's father has lived with the memory of a daughter who called to say she was on her way home for a couple of days.

She was coming home to tell her parents she was getting married, something "not too many people know," her father says.

But Jame never arrived. Her father called the police to report her missing. Her mother worried. Her father, afraid of a car accident, drove up and down the highway until the wee hours of the morning.

"Just looking," he says. "Trying to see something."

"But there was nothing to see. Not until he and his wife, Marian, were summoned to Ann Arbor. Not until they were asked to identify a body found on a grave site in a cemetery outside of Ypsilanti.

The body was their daughter's, the third young woman found slain within a 15-mile triangle within two years' time. By the summer of '69, there would be four more slayings in Washtenaw County. In all, seven young women would be killed, terrifying two college campuses, an entire community and much of the state. A 23-year-old Eastern Michigan University student, John Norman Collins, was convicted in one of the murders and implicated in the others.

Jane Louise Mixer, a first-year law student at the University of Michigan, born and raised in Muskegon, was one of the seven.

Jane's father has kept his peace all these years.

He has never spoken out, never responded to reporters' questions, not even on the day 20 years ago in Ann Arbor when he and his wife were surrounded by the curious and the attentive. The Mixers had just identified the body lying in an Ann Arbor morgue as their daughter. The police were escorting them outside, shepherding them through the most difficult hours of their lives.

"You do not have to answer their questions," one of the officers told the Mixers. And they did not.

"They said they'd keep reporters away from us," Mixer says today. "It was such a tragic situation. It seemed like such a personal invasion of privacy."

The Mixers would have to live with such intrusions for many months to come as officers from the Ann Arbor, Ypsilanti, Washtenaw County and Michigan State Police agencies and even the FBI worked to solve Jane Mixer's murder.

"To show you what it was like, even at Jane's funeral, somebody from the FBI came up to me and asked me if I noticed any shady characters who shouldn't have been there," Mixer says.

No one was ever charge with Jane Mixer's death, ust as no one was charged in the deaths of five other women found killed between July 1967 and July 1969 in the Ann Arbor-Ypsilanti area.

In August 1969, John Norman Collins was arrested for the death of the seventh victim, Karen Sue Beineman, an EMU student from Grand Rapids. Collins was convicted and sentenced to life in prison in 1970.

Although there were reports by both police and the media at the time that linked Collins with the other six women, Collins was not charged with their deaths.

"We took the case we had the best chance of winning," says William F. Delhey, the current Washtenaw County prosecuting attorney who argued the Collins' case in court.

Although 20 years have passed, Delhey has no need for files, no need for refresher courses, when it comes to discussing the six murders never solved -- and the one that was.

"I lost two years of my life," Delhey says. "I remember everything about the cases."

There were details that were different in the Mixer case, he says, things that distinguish her from the deaths of the other six women. She was not sexually assaulted. She had not been missing for several days before her body was found. The others had been hitchhiking. She had "advertised" for a ride home to Muskegon on a bulletin board in the Michigan Union where dozens of university students did the same every day.

There are differences, yes," Delhey says. "We don't know what happened...Like I say, we took the case we had the best chance of winning."

The case of Karen Sue Beineman.

The case turned into high courtroom drama with Collins' lawyers asking for a change of venue because they did not feel he could get a fair trial in Washtenaw County. It was widely reported in the graphic police and court reporting style of its era. And no doubt, it reopened any wounds that had managed to heal in the Mixers' lives.

"Newspapers tend to dwell on the tragedies of the world," Mixer says. "There comes a time when you have to say to yourself that the tragedy's taken place. You can dwell on it, or you can go on with your life."

That was when Mixer -- now 74 years old and semi-retired from a dental practice he began with his father in 1941 -- turned to his greatest source of strength. His family. His wife. His surviving daughter and son. His brothers. His sisters. Their families.

"I feel sorry for people without family," he says. "I don't know what you'd do without them."

Or what he'd do without his pragmatic philosophy of life.

"I guess you could say I am a realist," Mixer says. "No matter how good or honest you are, or how bad you are, things happen to  you that you just can't control."

"I have to assume they have no conclusive evidence that he did it (killed Jane)," he says.

But this is the man who went looking for his daughter the night of March 21, 1969, afraid she might have been in a car accident. And it may be time to speak his piece, after years of keeping a troubled peace.

"I hate it say it," Mixer says, "but if he were guilty, I would have to ask for capital punishment. But I couldn't condemn someone without a trial, either."

He says he still would refuse interviews, even on the 20th anniversary of his daughter's death, if his wife, Marian, had not died Nov. 4, 1987.

"I couldn't do that to her," he says. "My wife was really hit hard. She was an idealist, and these things just don't happen to idealists."

"Don't make me out a hero," says Jane Mixer's father. "I am no hero. But I can cope. I can look at the good in life. I can look for that and keep on living, even through this."

JANE LOUISE MIXER
...was on her way home

'I guess you could say I am a realist. No matter how good or honest you are, or how bad you are, things happen to you that you just can't control.'
--Dr. Dan Mixer