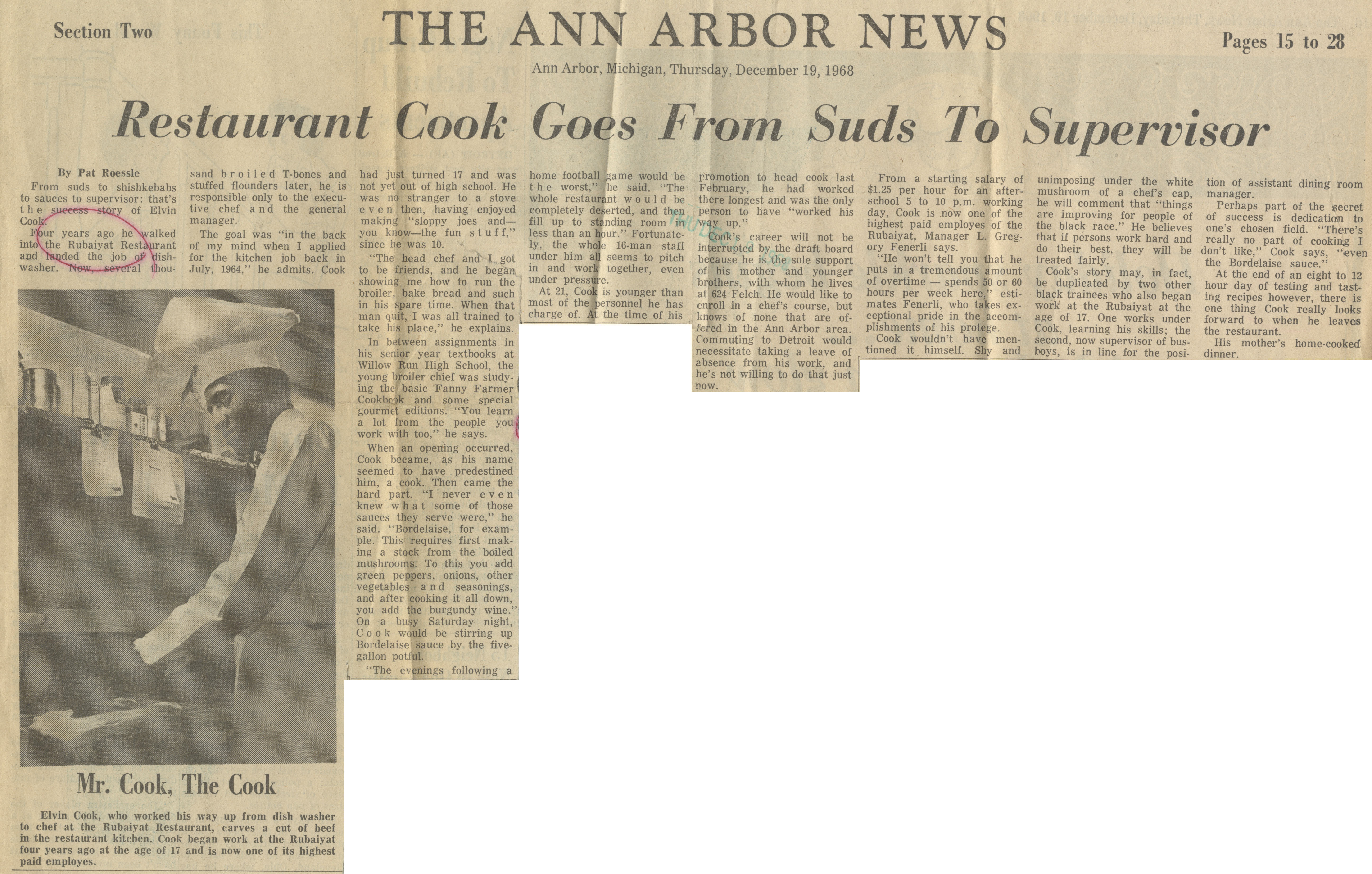 From suds to shishkebabs to sauces to supervisor: that's the success story of Elvin Cook.

Four years ago, he walked into Rubaiyat Restaurant and landed the job of dishwasher. Now, several thousand broiled T-bones and had just turned 17 and was stuffed flounders later, he is responsible only to the executive chef and general manager.

The goal was “in the back of my mind when I applied for the kitchen job back in July, 1964,” he admits. Cook had just turned 17 and was not yet out of high school. He was no stranger to a stove even then, having enjoyed making "sloppy joes and--you know--the fun stuff," since he was 10.

“The head chef and I got to be friends, and he began showing, me how to run the broiler, bake bread and such in his spare time. When that man quit, I was all trained to , take his place,” he explains.

In between assignments in his senior year textbooks at Willow Run High School, the young broiler chief was studying the basic Fanny Farmer Cookbook and some special gourmet editions. “You learn a lot from the people you work with too,” he says.

When an opening occurred, Cook became, as his name seemed to have predestined him, a cook. Then came the hard part. “I never even knew what some of those sauces they serve were,” he said. “Bordelaise, for example. This: requires first making a stock from the boiled mushrooms. To this you add green peppers, onions, and other vegetables and seasonings, and after cooking it all down, you add the burgundy wine." On a busy Saturday night, Cook would be stirring up Bordelaise sauce by the five-gallon potful.

"The evenings following a home football game would be the worst," he said. "The whole restaurant would be completely deserted, and then fill up to standing room in less than an hour." Fortunately, the 16-man staff under him all seems to pitch in and work together, even under pressure.

At 21, Cook is younger than most of the personell he has charge of. At the time of his promotion to head cook last February, he had worked there longest and was the only person to have “worked his way up."

Cook's career will not be by the draft board because he is the sole support of his mother and younger brothers, with whom he lives at 624 Felch. He would like to enroll in a  chef’s course, but knows of none that are offered in the Ann Arbor area. Commuting to Detroit would necessitate taking a leave of absence from his work, and he’s not willing to do that just now.

From a starting salary of $1.25 per hour for an afterschool 5 to 10 p.m. Working day, Cook is now one of the highest paid employees of the Rubaiyat, Manager L. Gregory Fenerli says.

“He won’t tell you that he ruts in a tremendous amount of overtime — spends .50 or 60 hours per week here;” estimates Fenerli, who takes exceptional pride in the accomplishments of his protege..

Cook wouldn’t have mentioned it himself. Shy and unimposing under the white mushroom of a chef’s cap, he will comment that “things are improving for people of the black race.” He believes that if persons work hard and do their best, they will be treated fairly.

Cook’s story may, in fact, be duplicated by two other black trainees who also began work at the Rubaiyat at the age of 17. One works under Cook, learning his skills; the second, now supervisor of bus-boys, is in line for the position of assistant dining room manager.

Perhaps part of the secret of success is dedication to one's chosen field. “There’s really no part of cooking I don’t like,” Cook says, “even the Bordelaise sauce.”

At the end of an eight to 12 hour day of testing and tasting recipes however, there is one thing Cook really looks forward to when he leaves the restaurant.

Elvin Cook, who worked his way up from dish washer to chef at the Rubaiyat Restaurant, carves a cut of beef in the restaurant kitchen. Cook began work at the Rubaiyat four years ago at the age of 17 and is now one of its highest paid employees.