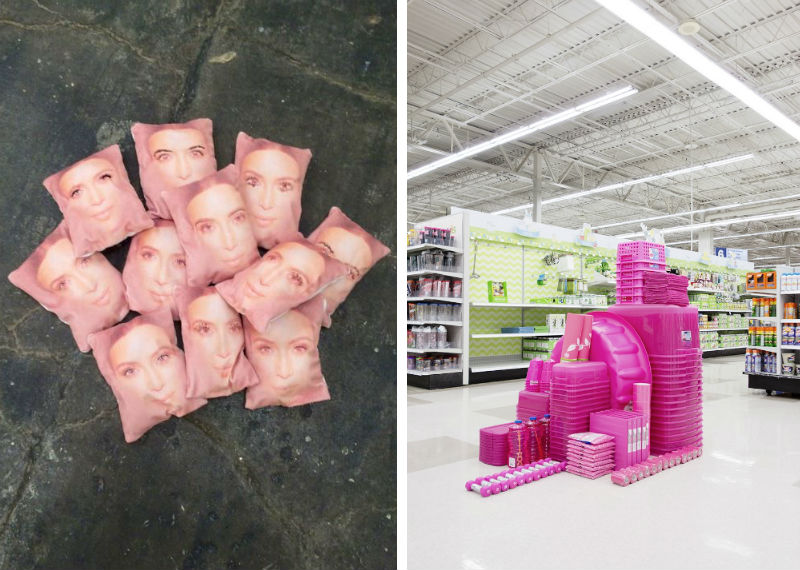 What, exactly, is “millennial pink”?

This term is now used to identify the aesthetic of an entire generation, the often-reviled millennial. This generation is defined as being born between 1981 and 2001. Whether you love or hate millennials, the color pink, or the term “millennial pink,” this exhibition delves into many issues at the forefront of contemporary cultural discussion.

The Millennial Pink exhibition is comprised of multi-media arts and will be on display at the Ann Arbor Art Center through Nov. 4. Artists in the show explore a variety of themes, including “gender identity, pop culture, sexuality, politics, and shades of Pantone pink.”

“Millennial pink” as a physical color that's represented in various works in the gallery seems to be any number of subdued shades and tints of pink. Its complement, which can be any number of tints and shades of green, is also found throughout the gallery space. Can any pink be millennial? The answer seems to be yes, especially if it is donned by someone fitting within the accepted age range of a millennial.

On the exhibition page, the Ann Arbor Art Center quotes Sady Doyle from Quartz Media, succinctly summarizing the ubiquitous quality of the color trend: “In practice, millennial pink is whatever shade of pink you want it to be.” In 2016, rose gold was the color, or was it simply a variation on the all-encompassing “millennial pink?” A quick Google search reveals articles with headers like "'Millennial Pink' Has Lost Its Cool. Prepare for the Return of Red," "The Real Reason No One Can Shut Up About Millennial Pink," or one seemingly written for the unaware millennials themselves: "WTF Is Millennial Pink, Anyway?"

The gallery asserts that within the show, “dichotomies are Carson Davis Brown’s photograph Mass_012 takes a critical stance toward consumer culture while employing that culture’s own tools. In the photograph, a large pink display made of an amalgam of consumer products stands in the center of a supermarket aisle, contrasting against a pale green complementary background from another consumer display. The work is self-described as “an installation project about creating visual disruptions in places of mass.” His statement delves into the project, explaining that the artist believes “the way we consume images perpetuates the abyssal production-consumption cycle. This has contributed to a flattening of space and culture into ‘non-places,’ as evidenced by the proliferation of the ‘Big Box’ store.”

Brown’s works intervene in the “already existing ecosystem” of these “big box” stores, or supermarkets, culling products in the store and re-arranging them in relation to the store’s environment. He looks for repetition in color, form, and type, evident in Mass_012, in which the large pink display contrasts against the bright, pale green display in the background. The photograph does not appear to be extraneously staged, and to back up this point, Brown states: “The products are altered only in their relative position, their actual context remains the same ... this disruption has a very short lifespan before being dismantled and restocked by store staff ... dissolving back into the consumer goods lexicon they emerged from.”

After the intervention is complete, he photographs the installations and prints them in the store’s photo department, displaying them in a for-sale frame straight from the store’s shelf. The print in the frame seems, to the general public, to be an intentional move by the home decor department, and is then purchased by a consumer (the artist states that the longest-running “show” of this kind was 30 minutes, before someone purchased the framed image).

When I saw the image in the gallery, I assumed it was another spring display to advertise the watermelon-filled summer days ahead, and did not consider the artist’s intervention in the space. I have seen so many similar, intentional displays, that it simply passed by unrecognizable to me as an artistic intervention. However, even if the interventions are covert, the finished product in the gallery space will undoubtedly raise the same pertinent questions about consumerism and aesthetics within that system.

Another attention-grabbing work, and one that embraces tropes of the millennial, Gabrielle DeCaro’s video Forget Your Kitten can be found in clips on the artist’s website, and is currently on display in the gallery. DeCaro works as an artist, actor, video-maker, and writer. She lives in Los Angeles and contributed to alternative variety shows, screendance shorts, and comedy sketches, as well as created her own monologues. All of these experiences translate into her work in Forget Your Kitten, a blend of these styles that seem utterly millennial and certainly very pink. The videos focus on female relationships and bizarre costuming and play, with the girls in the video doing “girly things” and performing choreographed dances in cat costumes. The video premiered in 2016 at University of Michigan’s Mind Your Head: The 2016 Stamps Senior Show and was described as:

Largely motivated by 1960’s variety show acts, questions of group identity/uniformity, and Cher’s female autonomy, FYK celebrates humor and expression through monologues, scenes and select performances recorded in front of a live audience. This show demands the kind of viewership that encourages women to be vocal, critical thinkers when it comes to inequality gaps. Nodding to her own development as a woman, centering the piece on intimacy and confabs of trust, DeCaro places her female friendships on the forefront.

The suggestion that this video demands a conscious effort by viewers seems to me a good observation. While I relate easily to the semiotics of the purple and pink hues and costuming of what might be considered a stereotypical millennial girlhood, many will likely find the performances baffling.

Finally, Chelsea Lee’s works Kim Kardashian Body Pillow and Kim Kardashian Mini Face Pillows ambiguously celebrates media culture by referencing one of the millennials' most notorious obsessions. The pink pillows that comprise this installation rest together on a gray-scale couch in the center of the gallery floor. The pillows are not, however, ordinary pillows (you may have guessed from the titles). One large pillow resembles a human form and depicts Kim Kardashian’s full body printed on the pale pink fabric. Next to the pillow-form of Kim Kardashian, which sits in the center of the couch, two piles of smaller pink pillows sit on either side. Each of the smaller pillows is printed with Kim’s face, identical to one another, and cropped in close.

The Kardashians appear to be of utmost concern to millennials, evidenced not only by this work of art existing, but also in the gallery statement: “Pink is the color of candy, but pink is also the color Kendall Jenner paints her walls to suppress her appetite.”

Kendall Jenner, for those unaware, is a famous model and half-sister of the Kardashians. Chelsea Lee’s artist statement suggests that the works are a result of her self-described obsession with a popular culture she wants to believe is not harmful, stating: “I get a sick feeling in my gut when I see the way people look at me once they know what/kind of culture I’m into. I’m tired of feeling ashamed. I’m tired of pretending that I’m intellectual in the same way that other people are.” Chelsea Lee’s pillows illustrate the dichotomous nature of many of these works, which exist in a fine art context, but embrace and suggest that “low culture,” media culture, and millennial culture belong there as much as anything else.

It is October, and with the exhibition running through November, Millennial Pink is “still a thing!”