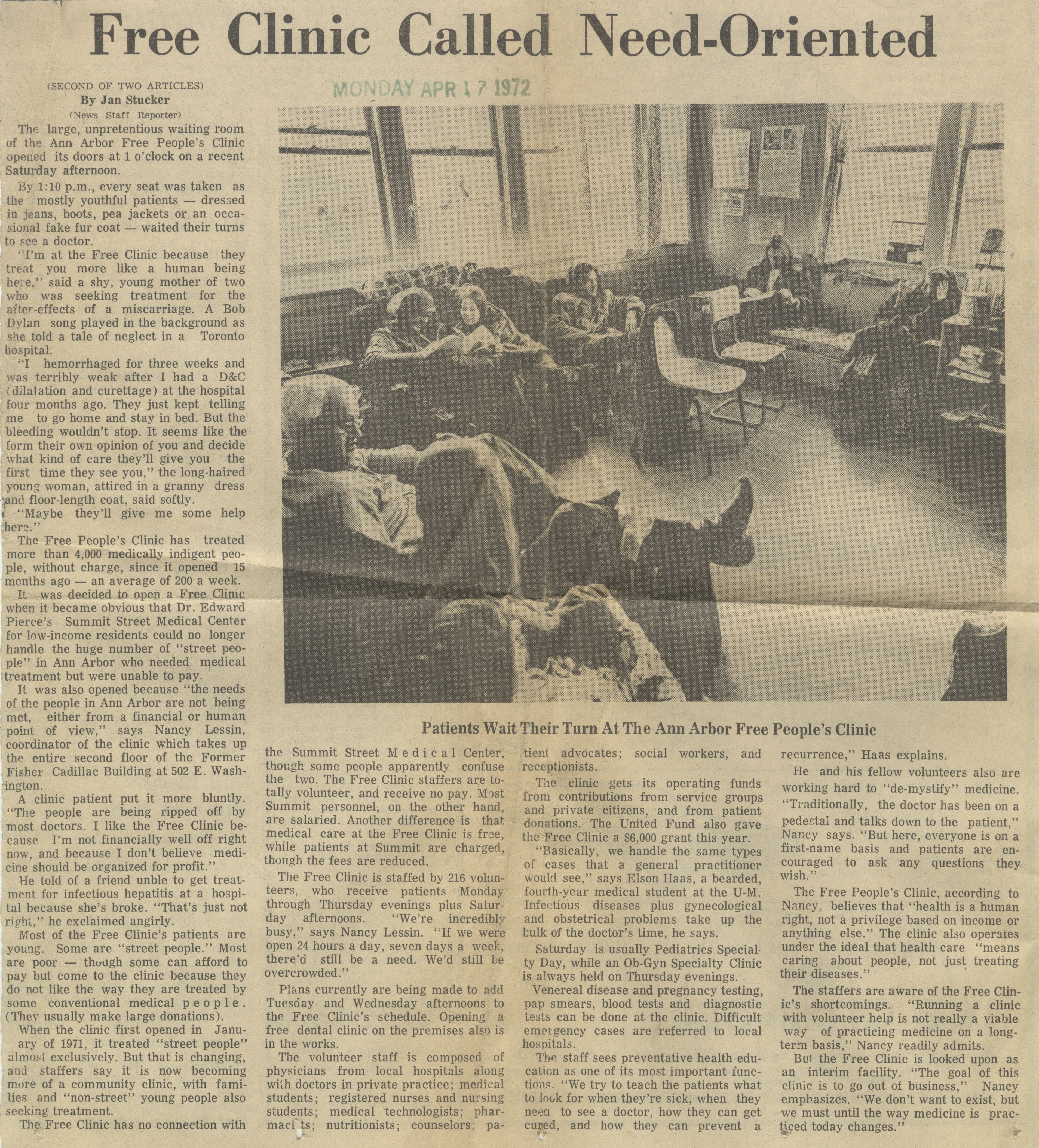 The large, unpretentious waiting room of the Ann Arbor Free People's Clinic opened its doors at 1 o'clock on a recent Saturday afternoon.

By 1:10 p.m., every seat was taken as the mostly youthful patients — dressed in jeans, boots, pea jackets or an occasional fake fur coat — waited their turns to see a doctor.

“I’m at the Free Clinic because they treat you more like a human being here,’’ said a shy, young mother of two who was seeking treatment for the after-effects of a miscarriage. A Bob Dylan song played in the background as she told a tale of neglect in a Toronto hospital.

“I hemorrhaged for three weeks and was terribly weak after I had a D&C (dilatation and curettage) at the hospital four months ago. They just kept telling me to go home and stay in bed. But the bleeding wouldn’t stop. It seems like the form their own opinion of you and decide what kind of care they’ll give you the first time they see you,” the long-haired young woman, attired in a granny dress and floor-length coat, said softly,  “Maybe they’ll give me some help here."

The Free People’s Clinic has treated more than 4,000 medically indigent people, without charge, since it opened 15 months ago — an average of 200 a week.

It was decided to open a Free Clime when it became obvious that Dr. Edward Pierce’s Summit Street Medical Center for low-income residents could no longer handle the huge number of “street people” in Ann Arbor who needed medical treatment but were unable to pay.

It was also opened because “the needs of the people in Ann Arbor are not being met, either from a financial or human point of view,” says Nancy Lessin, coordinator of the clinic which takes up the entire second floor of the Former Fisher Cadillac Building at 502 E. Washington.

A clinic patient put it more bluntly. “The people are being ripped off by most doctors. I like the Free Clinic because I'm not financially well off right now, and because I don’t believe medicine should be organized for profit.”

He told of a friend unable to get treatment for infectious hepatitis at a hospital because she’s broke. “That’s just not right.” he exclaimed angrily.

Most of the Free Clinic’s patients are young. Some are “street people.” Most are poor — though some can afford to pay but come to the clinic because they do not like the way they are treated by some conventional medical people. (They usually make large donations).

When the clinic first opened in January of 1971, it treated “street people” almost exclusively. But that is changing, and staffers say it is now becoming more of a community clinic, with families and “non-street” young people also seeking treatment.

The Free Clinic has no connection with the Summit Street Medical Center, though some people apparently confuse the two. The Free Clinic staffers are totally volunteer, and receive no pay. Most Summit personnel, on the other hand, are salaried. Another difference is that medical care at the Free Clinic is free, while patients at Summit are charged, though the fees are reduced.

The Free Clinic is staffed by 216 volunteers who receive patients Monday through Thursday evenings plus Saturday afternoons. “We’re incredibly busy,” says Nancy Lessin. “If we were open 24 hours a day, seven days a week, there’a still be a need. We’d still be overcrowded.”

Plans currently are being made to add Tuesday and Wednesday afternoons to the Free Clinic’s schedule. Opening a free dental clinic on the premises also is in the works.

The clinic gets its operating funds from contributions from service groups and private citizens, and from patient donations. The United Fund also gave the Free Clinic a $6,000 grant this year.

“Basically, we handle the same types of cases that a general practitioner would see,” says Elson Haas, a bearded, fourth-year medical student at the U-M. Infectious diseases plus gynecological and obstetrical problems take up the bulk of the doctor’s time, he says.

Venereal disease and pregnancy testing, pap smears, blood tests and diagnostic tests can be done at the clinic. Difficult emergency cases are referred to local hospitals.

The staff sees preventative health education as one of its most important functions. “We try to teach the patients what to look for when they’re sick, when they need to see a doctor, how they can get cured, and how they can prevent a recurrence,” Haas explains.

He and his fellow volunteers also are working hard to “de-mystify” medicine. “Traditionally, the doctor has been on a pedestal and talks down to the patient,” Nancy says. “But here, everyone is on a first-name basis and patients are encouraged to ask any questions they wish.”

The Free People's Clinic, according to Nancy, believes that “health is a human right, not a privilege based on income or anything else.” The clinic also operates under the ideal that health care “means caring about people, not just treating their diseases.”

The staffers are aware of the Free Clinic’s shortcomings. “Running a clinic with volunteer help is not really a viable way of practicing medicine on a longterm basis,” Nancy readily admits.

But the Free Clinic is looked upon as an interim facility. “The goal of this clinic is to go out of business,” Nancy emphasizes. “We don’t want to exist, but we must until the way medicine is practiced today changes.”