'Spectacular' is the word for art retrospective 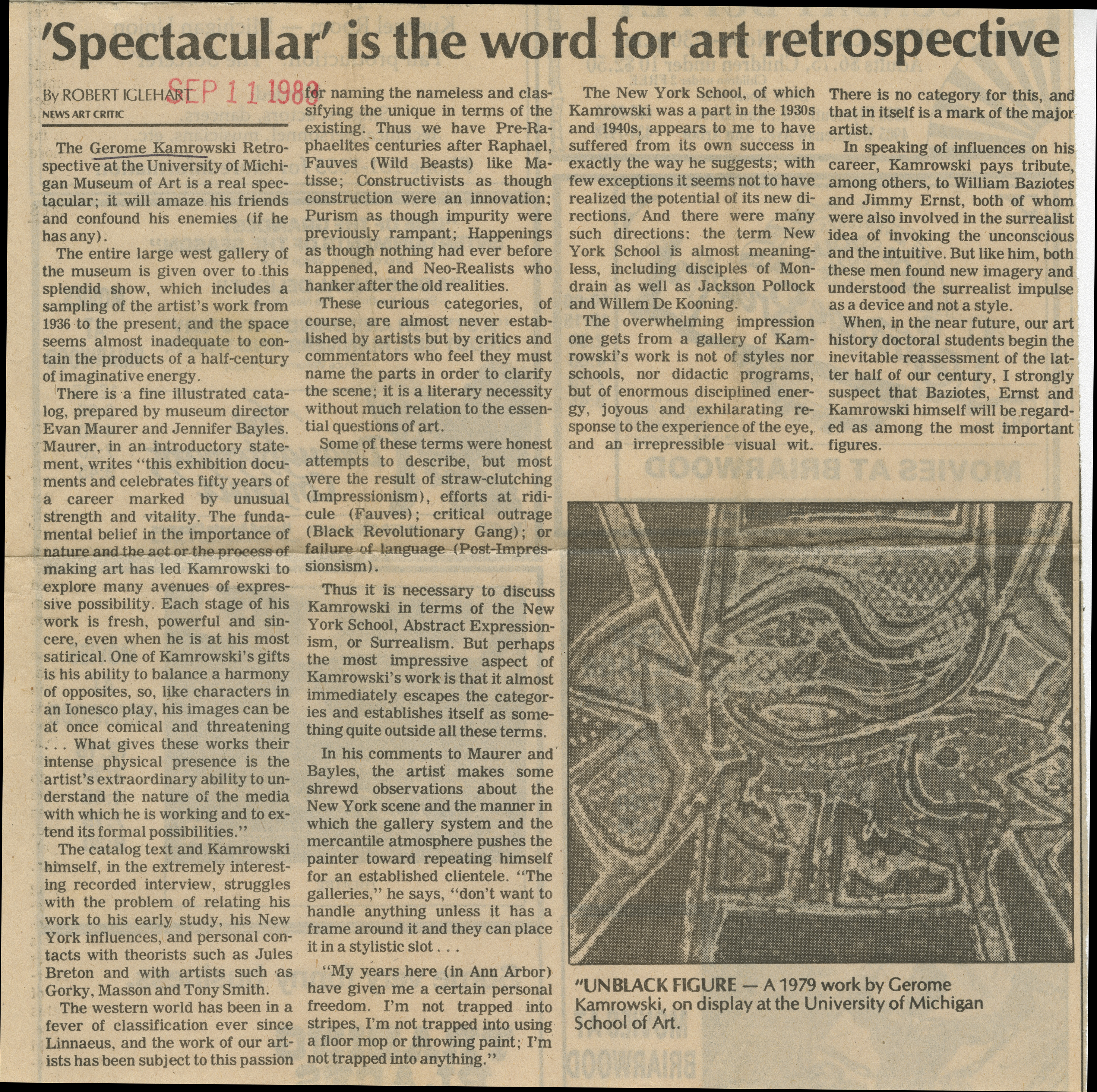 ﻿'Spectacular' is the word for art retrospective

"UNBLACK FIGURE--A 1979 work by Gerome Kamrowski, on display at the University of Michigan School of Art.

The Gerome Kamrowski Retrospective at the University of Michigan Museum of Art is a real spectacular; it will amaze his friends and confound his enemies (if he has any).

The entire large west gallery of the museum is given over to this splendid show, which includes a sampling of the artist’s work from 1936 to the present, and the space seems almost inadequate to contain the products of a half-century of imaginative energy.

There is a fine illustrated catalog, prepared by museum director Evan Maurer and Jennifer Bayles. Maurer, in an introductory statement, writes “this exhibition documents and celebrates fifty years of a career marked by unusual strength and vitality. The fundamental belief in the importance of nature and the act or the process of making art has led Kamrowski to explore many avenues of expressive possibility. Each stage of his work is fresh, powerful and sincere, even when he is at his most satirical. One of Kamrowski’s gifts is his ability to balance a harmony of opposites, so, like characters in an Ionesco play, his images can be at once comical and threatening . . . What gives these works their intense physical presence is the artist’s extraordinary ability to understand the nature of the media with which he is working and to extend its formal possibilities."

The catalog text and Kamrowski himself, in the extremely interesting recorded interview, struggles with the problem of relating his work to his early study, his New York influences, and personal contacts with theorists such as Jules Breton and with artists such as Gorky, Masson and Tony Smith.

The western world has been in a fever of classification ever since Linnaeus, and the work of our artists has been subject to this passion for naming the nameless and classifying the unique in terms of the existing. Thus we have Pre-Raphaelites centuries after Raphael, Fauves (Wild Beasts) like Matisse; Constructivists as though construction were an innovation; Purism as though impurity were previously rampant; Happenings as though nothing had ever before happened, and Neo-Realists who hanker after the old realities.

These curious categories, of course, are almost never established by artists but by critics and commentators who feel they must name the parts in order to clarify the scene; it is a literary necessity without much relation to the essential questions of art.

Some of these terms were honest attempts to describe, but most were the result of straw-clutching (Impressionism), efforts at ridicule (Fauves); critical outrage (Black Revolutionary Gang); or failure of- language (Post-Impressions ism) .

Thus it is necessary to discuss Kamrowski in terms of the New York School, Abstract Expressionism, or Surrealism. But perhaps the most impressive aspect of Kamrowski’s work is that it almost immediately escapes the categories and establishes itself as something quite outside all these terms.

In his comments to Maurer and Bayles, the artist makes some shrewd observations about the New York scene and the manner in which the gallery system and the mercantile atmosphere pushes the painter toward repeating himself for an established clientele. “The galleries,” he says, “don’t want to handle anything unless it has a frame around it and they can place it in a stylistic slot. . .

The New York School, of which Kamrowski was a part in the 1930s and 1940s, appears to me to have suffered from its own success in exactly the way he suggests; with few exceptions it seems not to have realized the potential of its new directions. And there were many such directions; the term New York School is almost meaningless, including disciples of Mondrain as well as Jackson Pollock and Willem De Kooning.

The overwhelming impression one gets from a gallery of Kamrowski’s work is not of styles nor schools, nor didactic programs, but of enormous disciplined energy, joyous and exhilarating response to the experience of the eye, and an irrepressible visual wit.

There is no category for this, and that in itself is a mark of the major artist.

In speaking of influences on his career, Kamrowski pays tribute, among others, to William Baziotes and Jimmy Ernst, both of whom were also involved in the surrealist idea of invoking the unconscious and the intuitive. But like him, both these men found new imagery and understood the surrealist impulse as a device and not a style.

When, in the near future, our art history doctoral students begin the inevitable reassessment of the latter half of our century, I strongly suspect that Baziotes, Ernst and Kamrowski himself will be regarded as among the most important figures.