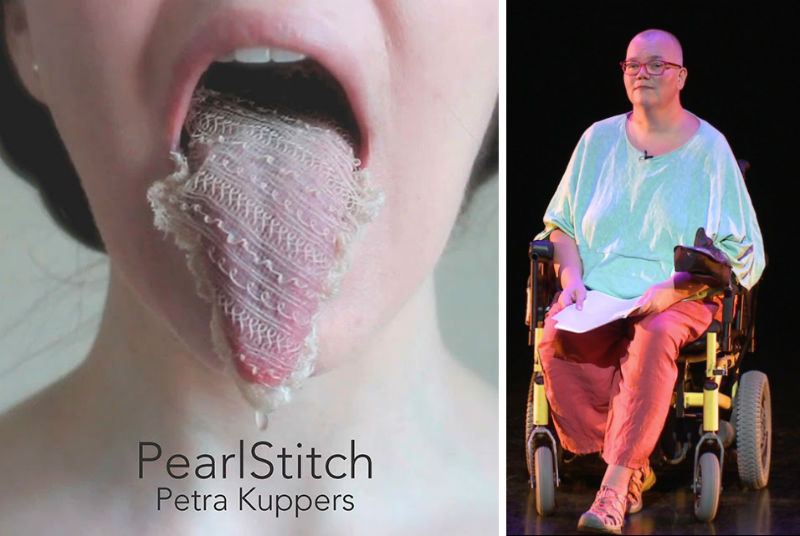 The cover of Petra Kuppers’ PearlStitch is provocative. It draws the eye and keeps it as the viewer takes in an open mouth and an extended lace-covered tongue with a bead of clear fluid at its tip. Her poetry is provocative, too, and after the Nov. 29 panel of University of Michigan faculty members discussing PearlStitch as a part of the Institute for Research on Women and Gender’s "Gender: New Works, New Questions" series, I knew I wanted to dive into Kuppers’ latest collection. But I wasn't unable to put my hands on a copy of the book following the reading as Ann Arbor bookstores were sold out.

Kuppers is affiliated with several U-M departments and is a visual artist, creative writer, activist, and founder of The Olimpias, an artists' collective and a performance research series. Joining her on the panel were professors Naomi Andre and Melanie Yeargeau.

After the panel invited the dozen or so audience members to the front of the room, Andre began to discuss PearlStitch, plotting for us the coordinates of this lyrical landscape. Andre pointed out that Kuppers’ book consists of nine unequal parts and talked about the importance of space in the work. As I listened to Andre’s nuanced and well-considered interpretation of Kuppers’ work, I began to watch the poet who nodded in agreement. "As a woman, what is home? What is community among women?" --Professor Naomi Andre in response to "PearlStitch" Then Yergeau took a turn discussing the work, and the space between the two interpretations struck me. They were not in conflict, but they served to remind that there are worlds that exist beyond the words on the page, particularly when engaging with poetry.

Yergeau described the work as multisensory and pulled out an anti-capitalist thread. She found herself thinking about the coexistence of beauty and horror in the book; questions about labor and representation; and of the book’s pedagogical offerings, particularly in relation to disability studies. Both professors remarked on the role of the body, of physicality in this work. They both made reference to a poem about The United Society of Believers in Christ’s Second Appearing, more commonly known as the Shakers. Yergeau asked in response to this poem “what it means to convulse with devotion.” Kuppers took a moment to digest these different interpretations of her work from her colleagues, remarking that it was quite unusual for her to hear responses to her work in real life. Kuppers had been in a residency when she read a Vogue article that inspired her to write a poem out from which the rest of the collection grew. The article talked about factory workers, but in an uncomfortable, sensationalized way, which bothered her enough that she took the time to figure out why. It turned out to have a connection to her family life. Growing up in Germany, she had watched the work her father had performed in factories. As a teenager, she herself had spent time in these spaces, working for a time in factories that made cookies, earning both the blisters and eventual aversion to cookies that came with the territory.

She began to consider the factory as a place where the realities of physical repetitive work and other dangers await women. Kuppers read a poem she wrote about her grandmother who would perform the German tradition of boiling lead, plunging it into cold water, and then using the shape that formed to tell the future. It was a beautifully rhythmic; Kuppers moved as she read it, her body following her voice as it danced through her words. Even though this was a family poem, a poem about roles and fortune, lead’s potential corruption of the body loomed in the background. “Just take stuff into your mouth and play with it. There you go. Poetry.” --Petra Kuppers When asked what it was like to write poetry in English rather than her native German, Kuppers told us that she had never really written poetry in German. She said that she is excited by the rhythm of the words, and that she thinks that writing in this language that isn’t her native language is actually essential to her poetry. “I heard one of your stories on Podcastle.’ This never happens to academics.” --Petra Kuppers

Currently, Kuppers is in the proof-reading phase of her newest work, Ice Bar, a collection of short stories. These are speculative stories influenced by Donna Haraway’s Staying With the Trouble and Octavia’s Brood: Science Fiction Stories From Social Justice Movements. Bodies are important in this work, too. Each of these stories involves bodily transformation. Of her stories, Kuppers says that only one person dies in the stories and that one person is a bully. “We’re not seeing women eviscerated,” she said, and then pointed out how often women are destroyed in the speculative genres. Interested in understanding a variety of different literary spaces, Kuppers submitted work to both literary spaces and genre-specific places. She talked about how differently literary poetry and science fiction writing are received by people in passing conversations. There is a world of difference between the polite nods that come in response to the poetry and the eager how-can-I-read-this response to the genre fiction. But I felt the how-can-I-read-this-now urge, which is why I went book shopping right after. Provocation works.