LOCATION CHANGE: This event is now being held in the 1st Floor Lobby of the Downtown Library.

If you wanted to design and fly a robotic spacecraft on a 9 year voyage, 3 billion miles from Earth, the farthest journey of exploration our species has ever attempted… HOW WOULD YOU DO IT?

On July 14, 2015, something amazing happened. More than 3 billion miles from Earth, a small NASA spacecraft called New Horizons screamed past Pluto at more than 32,000 miles per hour, focusing its instruments on the long mysterious icy worlds of the Pluto system, and then, just as quickly, continued on its journey out into the beyond. Nothing like this has occurred in a generation—a raw exploration of new worlds unparalleled since NASA’s Voyager missions to Uranus and Neptune—and nothing quite like it is planned to happen ever again. At a time when so many think that our most historic achievements are in the past, the most distant planetary exploration ever attempted not only succeeded in 2015 but made history and captured the world’s imagination.

It is the story of decades-long commitment and persistence; political fights within and outside of NASA; and sheer human ingenuity in designing, building, and flying the mission. And Dr. Stern will give a preview of New Horizons’ next encounter, as it performs a flyby of MU69 in the Kuiper Belt, 1 billion miles past Pluto, in 2019. 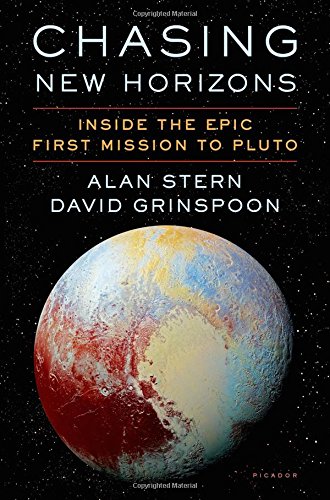 DR. ALAN STERN is principal investigator (PI) of the New Horizons mission, leading NASA’s exploration of the Pluto system and the Kuiper Belt. A planetary scientist, space-program executive, aerospace consultant, and author, he has participated in over two dozen scientific space missions and has been involved at the highest levels in several aspects of American space exploration. Dr. Stern is the recipient of numerous awards, including the 2016 Carl Sagan Memorial Award of the American Astronautical Society, and has twice been named to the Time 100. He lives in Colorado.

DR. DAVID GRINSPOON is an astrobiologist, award-winning science communicator, and prize-winning author. In 2013 he was appointed the inaugural chair of astrobiology at the Library of Congress. He is a frequent advisor to NASA on spaceexploration strategy, and is on the science teams for several interplanetary spacecraft missions. Grinspoon's previous books include Earth in Human Hands (2016) and his writing has appeared in The New York Times, Slate, Scientific American, Los Angeles Times, and others. He lives in Washington, DC.

This event includes a book signing and books will be for sale.