Pryors in Berlin Trying To Get Son Freed 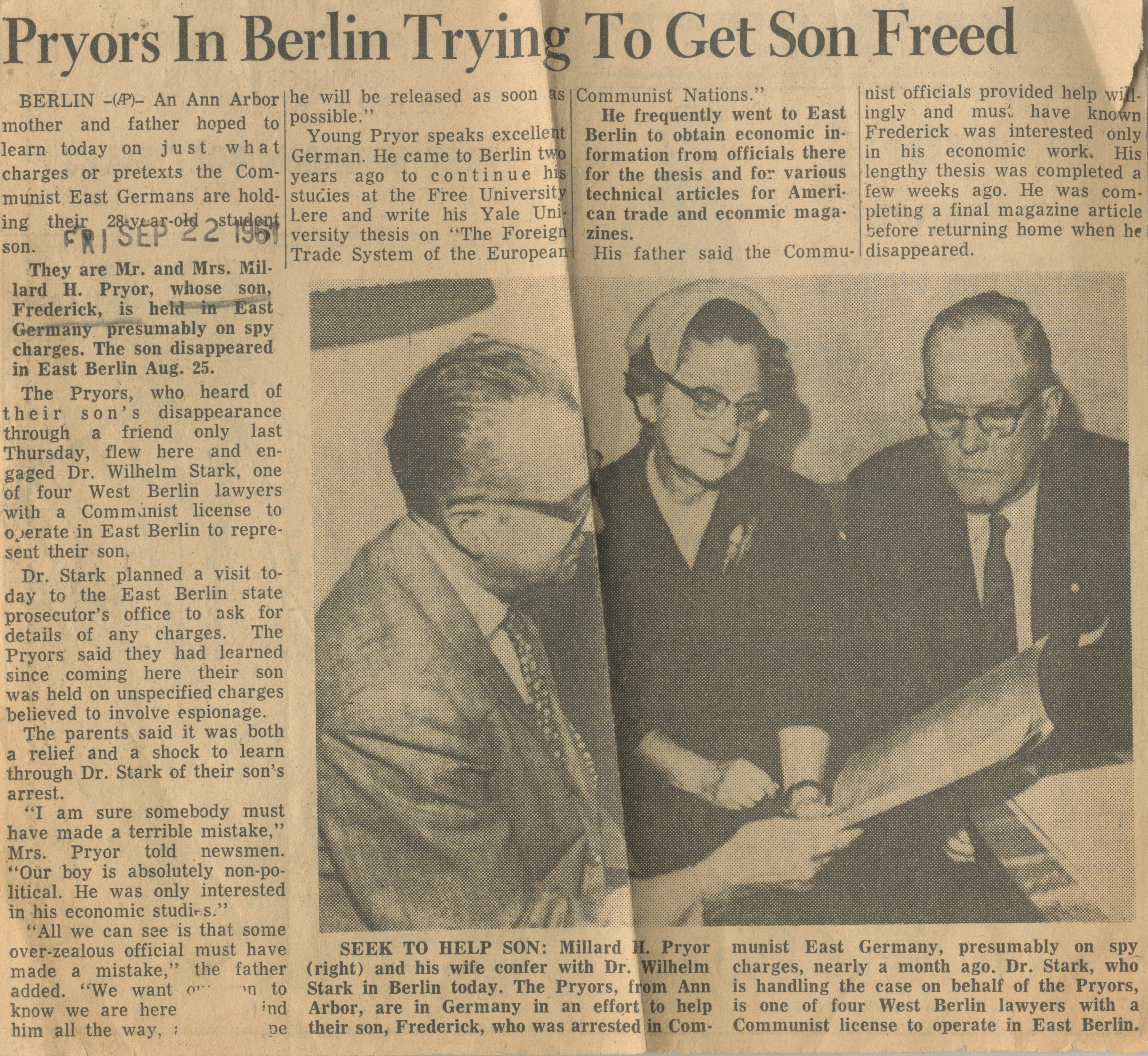 Pryors In Berlin trying to Get Son Freed

BERLIN -(AP)- An Ann Arbor mother and father hoped to learn today on just what charges or pretexts the communist East Germans are holding their 28-year-old student son.

They are Mr. and Mrs. Millard H. Pryor, whose son, Frederick, is held in East Germany presumably on spy charges. The son disappeared in East Berlin Aug. 25.

The Pryors, who heard of their son’s disappearance through a friend only last Thursday, flew here and engaged Dr. Wilhelm Stark, one of four West Berlin lawyers with a Communist license to operate in East Berlin to represent their son.

he will be released as soon possible.”

Dr. Stark planned a visit today to the East Berlin state prosecutor’s office to ask for details of any charges. The Pryors said they had learned since coming here their son was held on unspecified charges believed to involve espionage.

The parents said it was both a relief and a shock to learn through Dr. Stark of their son’s arrest.

“I am sure somebody must have made a terrible mistake,” Mrs. Pryor told newsmen. “Our boy is absolutely non-political. He was only interested in his economic studies.”

“All we can see is that some over-zealous official must have made a mistake,” the father added. “We want [missing]

he will be released as soon as possible."

Young Pryor speaks excellent German. He came to Berlin two years ago to continue his studies at the free University Lere and write his Yale University thesis on "the Foreign trade system of the European Communist Nations."

He frequently went to East Berlin to obtain economic information from officials there for the thesis and for various technical articles for American trade and econmic magazines.

His father said the Commu-

nist officials provided help wilingly and must have known Frederick was interested only in his economic work. His lengthy thesis was completed a few weeks ago. He was completing a final magazine article before returning home when he disappeared.

SEEK TO HELP SON: Millard H. Pryor (right) and his wife confer with Dr Wilhelm Stark in Berlin today. The Pryors, from Ann Arbor, are in Germany in an effort to help their son, Frederick, who was arrested in Com-

munist East Germany, presumably on spy charges, nearly a month ago. Dr. Stark, who is handling the case on behalf of the Pryors, is one of four West Berlin lawyers with a Communist license to operate in East Berlin.