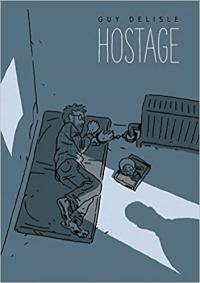 Christophe Andre was working in the Caucasus a humanitarian with Médecins Sans Frontières, when he was kidnapped and taken to an unknown location. He was held hostage by Chechnyans for three months in one room, handcuffed to a radiator. Graphic artist Guy Delisle takes on the challenge of illustrating the day to day boredom, loneliness, and fear that Andre experienced. Delisle’s creation, Hostage, is a engrossing visual retelling of Andre’s three months in captivity. Frame by frame, we feel Andre’s confused mixture of distress and ennui through Delisle’s detailed and engaging drawings. Andre showed amazing strength of character through the ordeal, even attempting escape several times, and Hostage is a fitting tribute. Delisle is better known for his graphic travel memoirs, Burma Chronicles, Shenzhen: A Travelogue From China, Pyongyang: A Journey In North Korea, and Jerusalem: Chronicles From The Holy City, all of which I highly recommend. Though a departure for Delisle, Hostage is a great success.