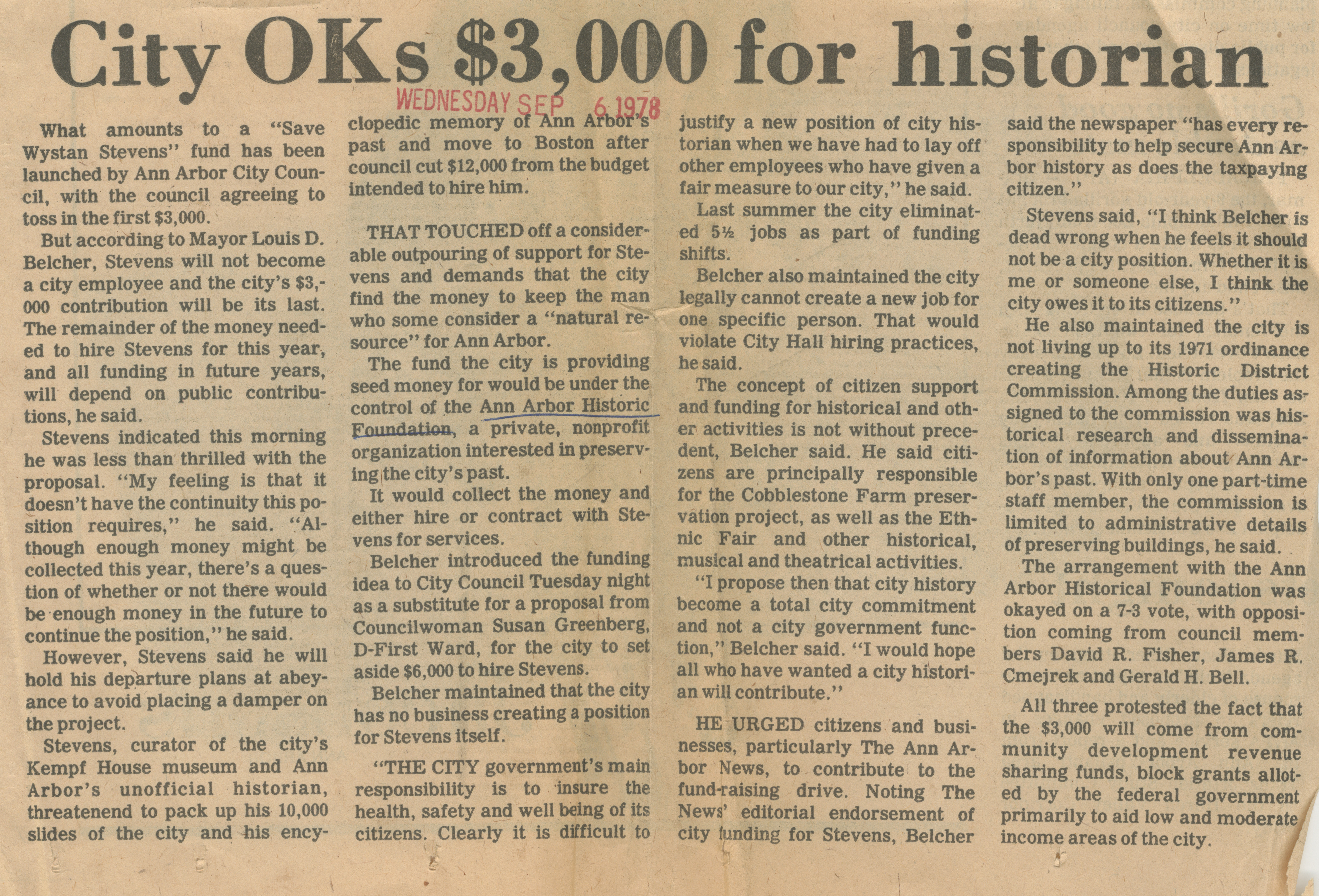 What amounts to a “Save Wystan Stevens” fund has been launched by Ann Arbor City Council, with the council agreeing to toss in the first $3,000.

But according to Mayor Louis D. Belcher, Stevens will not become a city employee and the city’s $3,000 contribution will be its last. The remainder of the money needed to hire Stevens for this year and all funding in future years, will depend on public contributions, he said.

Stevens indicated this morning he was less than thrilled with the proposal. “My feeling is that it doesn’t have the continuity this position requires,” he said. “Although enough money might be collected this year, there’s a question of whether or not there would be enough money in the future to continue the position,” he said.

However, Stevens said he will hold his departure plans at abeyance to avoid placing a damper on the project.

Stevens, curator of the city’s Kempf House museum and Ann Arbor’s unofficial historian, threatened to pack up his 10,000 slides of the city and his encyclopedic memory of Ann Arbor's past and move to Boston after council cut $12,000 from the budget intended to hire him.

THAT TOUCHED off a considerable outpouring of support for Stevens and demands that the city find the money to keep the man who some consider a “natural resource” for Ann Arbor.

The fund the city is providing seed money for would be under the control of the Ann Arbor Historic Foundation, a private, nonprofit organization interested in preserving the city’s past.

It would collect the money and either hire or contract with Stevens for services.

Belcher introduced the funding idea to City Council Tuesday night as a substitute for a proposal from Councilwoman Susan Greenberg, D-First Ward, for the city to set aside $6,000 to hire Stevens.

Belcher maintained that the city has no business creating a position for Stevens itself.

“THE CITY government’s main responsibility is to insure the health, safety and well being of its citizens. Clearly it is difficult to justify a new position of city historian when we have had to lay off other employees who have given a fair measure to our city,” he said.

The concept of citizen support and funding for historical and other activities is not without precedent, Belcher said. He said citizens are principally responsible for the Cobblestone Farm preservation project, as well as the Ethnic Fair and other historical, musical and theatrical activities.

“I propose then that city history become a total city commitment and not a city government function,” Belcher said. “I would hope all who have wanted a city historian will contribute.”

HE URGED citizens and businesses, particularly The Ann Arbor News, to contribute to the fund-raising drive. Noting The News’ editorial endorsement of city funding for Stevens, Belcher said the newspaper “has every responsibility to help secure Ann Arbor history as does the taxpaying citizen.”

Stevens said, “I think Belcher is dead wrong when he feels it should not be a city position. Whether it is me or someone else, I think the city owes it to its citizens.”

He also maintained the city is not living up to its 1971 ordinance creating the Historic District Commission. Among the duties assigned to the commission was historical research and dissemination of information about Ann Arbor’s past. With only one part-time staff member, the commission is limited to administrative details of preserving buildings, he said.

The arrangement with the Ann Arbor Historical Foundation was okayed on a 7-3 vote, with opposition coming from council members David R. Fisher, James R. Cmejrek and Gerald H. Bell.

All three protested the fact that the $3,000 will come from community development revenue sharing funds, block grants allot-ed by the federal government primarily to aid low and moderate income areas of the city.