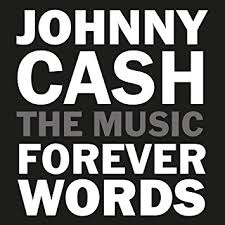 Not everyone loves country music, but it's hard to find anyone who won't listen to an old Johnny Cash tune. After hearing that Johnny Cash: Forever Words, a new CD featuring various artists performing unheard Cash writings was about to be released, I discovered Forever Words: The Unknown Poems  a book comprised of Cash's unpublished writing. The forward, written by Johnny's son John, is a heart-warming account of his dad's true self, his brilliance. "All that made up my father is to be found in this book, within these 'forever words'." Then, as often happens, one thing lead to another and I had to listen to Johnny Cash Unchained when I read that Chris Cornell's performance on Johnny Cash Forever Words was one of his last. Johnny had covered Soundgarden's Rusty Cage twenty one years earlier on that album. It's interesting how lives become woven together from a love of music.