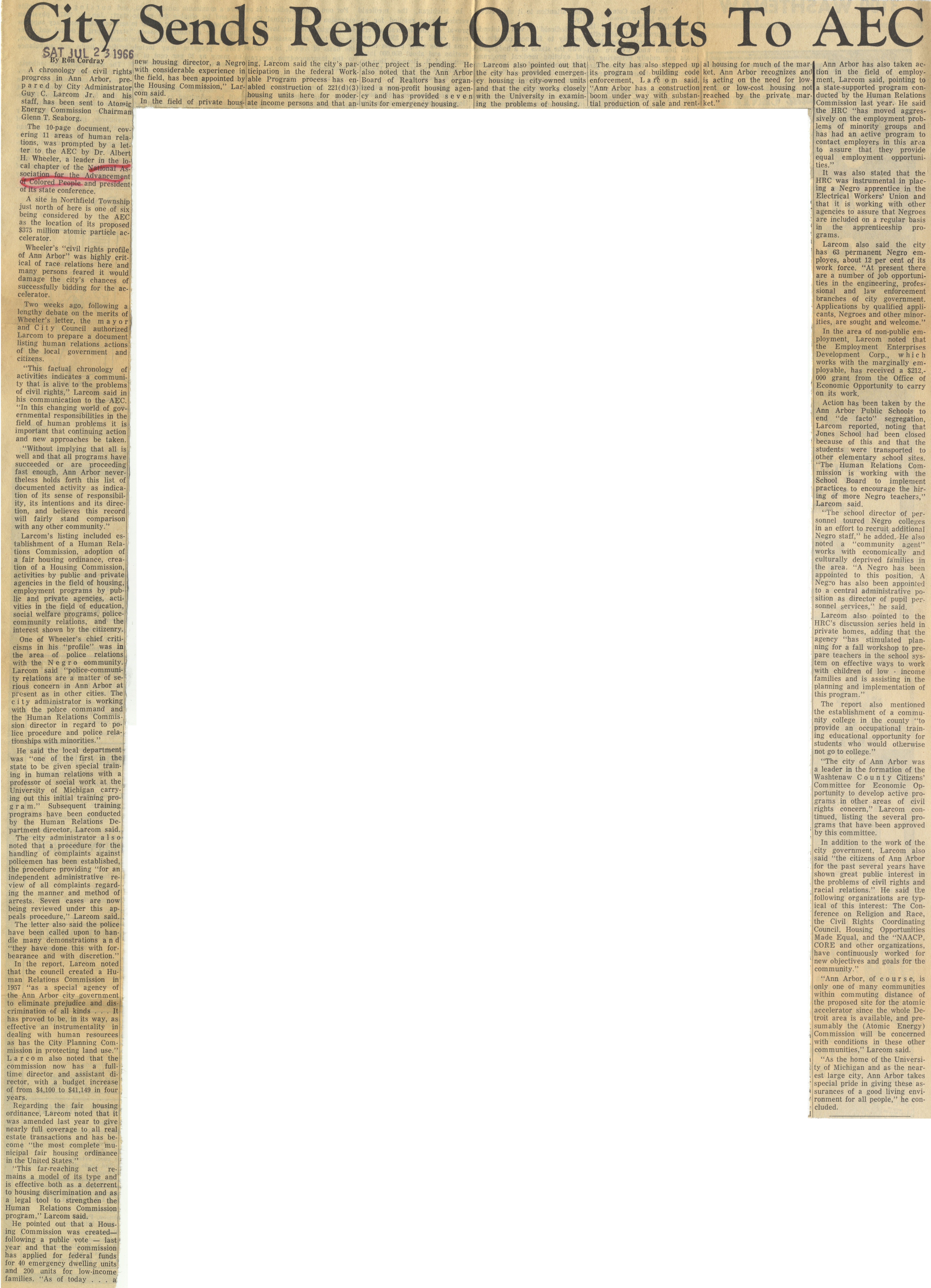 The 10-page document, covering 11 areas of human relations, was prompted by a letter to the AEC by Dr. Albert H. Wheeler, a leader in the local chapter of the National association for the Advancement of Colored People and president of its state conference.

A site in Northfield Township just north of here is one of six being considered by the AEC as the location of its proposed $375 million atomic particle accelerator.

Wheeler’s “civil rights profile of Ann Arbor” was highly critical of race relations here and many persons feared it would damage the city's chances of successfully bidding for the accelerator.

Two weeks ago, following a lengthy debate on the merits of Wheeler's letter, the mayor and City Council authorized Larcom to prepare a document listing human relations actions of the local government and citizens.

“This factual chronology of activities indicates a community that is alive to the problems of civil rights,” Larcom said in his communication to the AEC. “In this changing world of governmental responsibilities in the field of human problems it is important that continuing action and new approaches be taken.

“Without implying that all is well and that all programs have succeeded or are proceeding fast enough, Ann Arbor nevertheless holds forth this list of documented activity as indication of its sense of responsibility, its intentions and its direction, and believes this record will fairly stand comparison with any other community.”

Larcom’s listing included establishment of a Human Relations Commission, adoption of a fair housing ordinance, creation of a Housing Commission, activities by public and private agencies in the field of housing, employment programs by public and private agencies, activities in the field of education, social welfare programs, police-community relations, and the interest shown by the citizenry.

One of Wheeler’s chief criticisms in his “profile” was in the area of police relations, with the Negro community. Larcom said “police-community relations are a matter of serious concern in Ann Arbor at present as in other cities. The city administrator is working with the police command and the Human Relations Commission director in regard to police procedure and police relationships with minorities.”

He said the local department was “one of the first in the state to be given special training in human relations with a professor of social work at the University of Michigan carrying out this initial training program.” Subsequent training programs have been conducted by the Human Relations Department director, Larcom said.

The city administrator also noted that a procedure for the handling of complaints against policemen has been established, the procedure providing “for an independent administrative review of all complaints regarding the manner and method of arrests. Seven cases are now being reviewed under this appeals procedure,” Larcom said.

The letter also said the police have been called upon to handle many demonstrations and “they have done this with forbearance and with discretion.”

In the report, Larcom noted that the council created a Human Relations Commission in 1957 “as a special agency of the Ann Arbor city government to eliminate prejudice and discrimination of all kinds . . . It has proved to be, in its way, as effective an instrumentality in dealing with human resources as has the City Planning Commission in protecting land use.” Larcom also noted that the commission now has a fulltime director and assistant director, with a budget increase of from $4,100 to $41,149 in four years.

"This far-reaching act remains a model of its type and is effective both as a deterrent to housing discrimination and as a legal tool to strengthen the Human Relations Commission program,” Larcom said.

He pointed out that a Housing Commission was created— following a public vote — last year and that the commission has applied for federal funds for 40 emergency dwelling units and 200 units for low-income families. “As of today . . . a new housing director, a Negro with considerable experience in the field, has been appointed by Housing Commission,” Larcom said.

In the field of private housing, Larcom said the city’s participation in the federal Workable Program process has enabled construction of 221(d)(3) housing units here for moderate income persons and that another project is pending. He also noted that the Ann Arbor Board of Realtors has organized a non-profit housing agency and has provided seven units for emergency housing.

Larcom also pointed out that the city has provided emergency housing in city-owned units and that the city works closely with the University in examining the problems of housing.

The city has also stepped up its program of building code enforcement, Larcom said.

“Ann-Arbor has a construction boom under way with substantial production of sale and rental housing for much of the market. Ann Arbor recognizes and is acting on the need for low-rent or low-cost housing not reached by the private market.”

Ann Arbor has also taken action in the field of employment, Larcom said, pointing to a state-supported program conducted by the Human Relations Commission last year. He said the HRC “has moved aggressively on the employment problems of minority groups and has had an active program to contact employers in this area to assure that they provide equal employment opportunities.”

It was also stated that the HRC was instrumental in placing a Negro apprentice in the Electrical Workers’ Union and that it is working with other agencies to assure that Negroes are included on a regular basis in the apprenticeship programs.

Larcom also said the city has 63 permanent Negro employees, about 12 per cent of its work force. “At present there are a number of job opportunities in the engineering, professional and law enforcement branches of city government. Applications by qualified applicants, Negroes and other minorities, are sought and welcome.” In the area of non-public employment, Larcom noted that the Employment Enterprises Development Corp., which works with the marginally employable, has received a $212,000 grant from the Office of Economic Opportunity to carry on its work.

Action has been taken by the Ann Arbor Public Schools to end “de facto” segregation, Larcom reported, noting that Jones School had been closed because of this and that the students were transported to other elementary school sites. “The Human Relations Commission is working with the School Board to implement practices to encourage the hiring of more Negro teachers,” Larcom said.

“The school director of personnel toured Negro colleges in an effort to recruit additional Negro staff,” he added. He also noted a “community agent” works with economically and culturally deprived families in the area. “A Negro has been appointed to this position. A Negro has also been appointed to a central administrative position as director of pupil personnel services,” he said.

Larcom also pointed to the HRC’s discussion series held in private homes, adding that the agency “has stimulated planning for a fall workshop to prepare teachers in the school system on effective ways to work with children of low-income families and is assisting in the planning and implementation of this program.”

The report also mentioned the establishment of a community college in the county “to provide an occupational training educational opportunity for students who would otherwise not go to college.”

“The city of Ann Arbor was a leader in the formation of the Washtenaw County Citizens’ Committee for Economic Opportunity to develop active programs in other areas of civil rights concern,” Larcom continued, listing the several programs that have been approved by this committee.

In addition to the work of the city government, Larcom also said “the citizens of Ann Arbor for the past several years have shown great public interest in the problems of civil rights and racial relations.” He said the following organizations are typical of this interest: The Conference on Religion and Race, the Civil Rights Coordinating Council, Housing Opportunities Made Equal, and the “NAACP, CORE and other organizations, have continuously worked for new objectives and goals for the community.”

“Ann Arbor, of course, is only one of many communities within commuting distance of the proposed site for the atomic accelerator since the whole Detroit area is available, and presumably the (Atomic Energy) Commission will be concerned with conditions in these other communities,” Larcom said.

“As the home of the University of Michigan and as the nearest large city, Ann Arbor takes special pride in giving these assurances of a good living environment for all people,” he concluded.