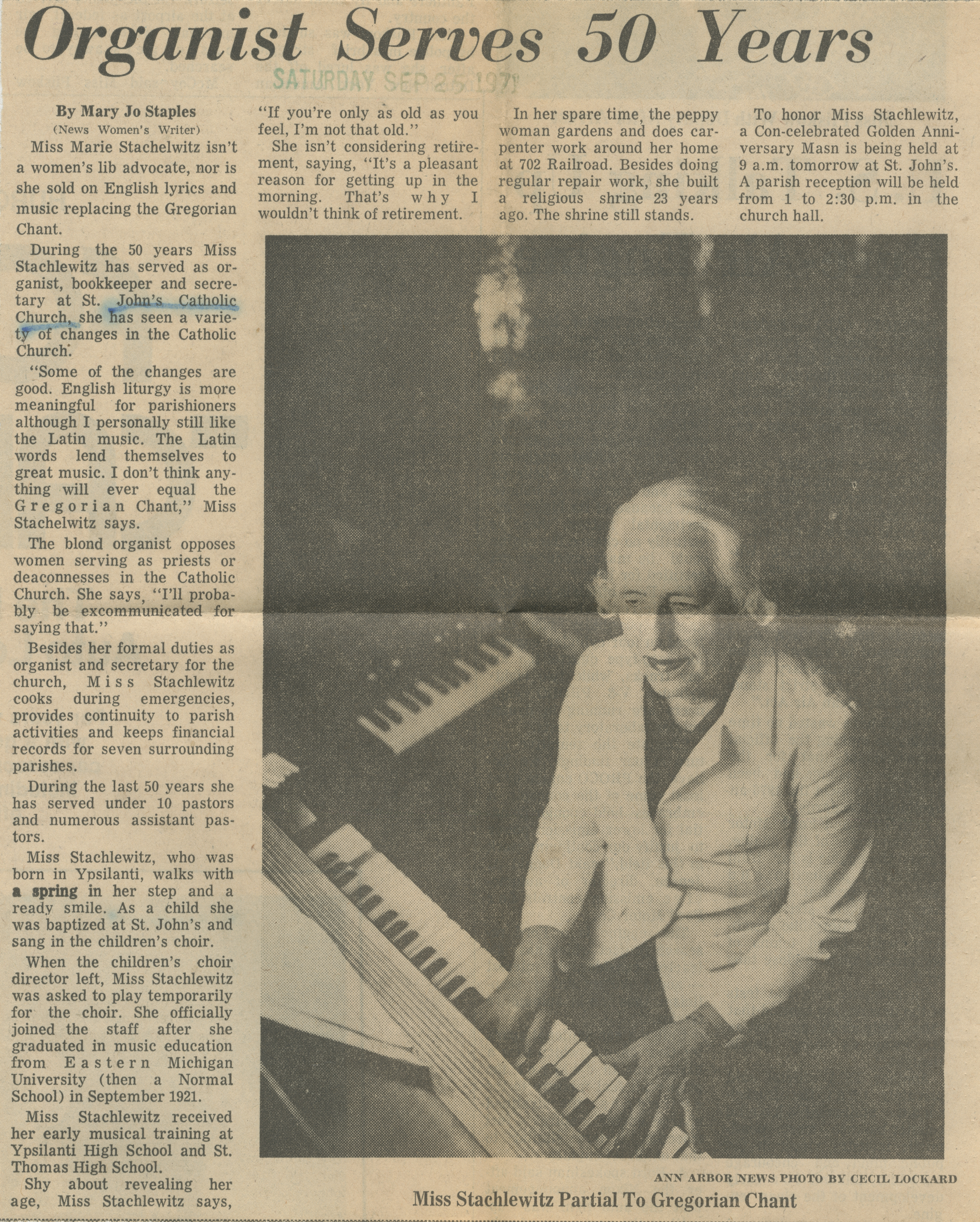 Miss Marie Stachlewitz isn’t a women’s lib advocate, nor is she sold on English lyrics and music replacing the Gregorian Chant.

During the 50 years Miss Stachlewitz has served as organist, bookkeeper and secretary at St. John’s Catholic Church, she las seen a variety of changes in the Catholic Church.

“Some of the changes are good. English liturgy is more meaningful for parishioners although I personally still like the Latin music. The Latin words lend themselves to great music. I don’t think anything will ever equal the Gregorian Chant,” Miss Stachelwitz says.

The blond organist opposes women serving as priests or deaconnesses in the Catholic Church. She says, “I’ll probably be excommunicated for saying that.”

Besides her formal duties as organist and secretary for the church, Miss Stachlewitz cooks during emergencies, provides continuity to parish activities and keeps financial records for seven surrounding parishes.

During the last 50 years she has served under 10 pastors and numerous assistant pastors.

Miss Stachlewitz, who was born in Ypsilanti, walks with a spring in her step and a ready smile. As a child she was baptized at St. John’s and sang in the children’s choir.

When the children’s choir director left, Miss Stachlewitz was asked to play temporarily for the choir. She officially joined the staff after she graduated in music education from Eastern Michigan University (then a Normal School) in September 1921.

Shy about revealing her age, Miss Stachlewitz says, “If you’re only as old as you feel, I’m not that old.”

She isn’t considering retirement, saying, “It’s a pleasant reason for getting up in the morning. That’s why I wouldn’t think of retirement.

In her spare time, the peppy woman gardens and does carpenter work around her home at 702 Railroad. Besides doing regular repair work, she built a religious shrine 23 years ago. The shrine still stands.

To honor Miss Stachlewitz, a Con-celebrated Golden Anniversary Masn is being held at 9 a.m. tomorrow at St. John’s. A parish reception will be held from 1 to 2:30 p.m. in the church hall.