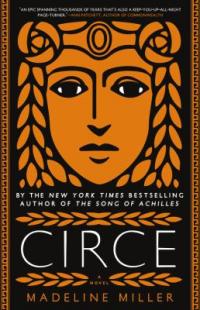 In her new novel, Circe, Madeline Miller gives voice to this Greek goddess usually featured peripherally in the myths of men.  In the span of hundreds of years Circe’s path crosses that of many mortals and gods; Daedalus, Jason and Medea, Hermes, Odysseus, and armies of men who chance upon her shores and seek to take advantage of her. Circe is famous for turning men into swine on the island Aeaea, where she has been exiled for using witchcraft. Miller fleshes out the back story of why Circe started doing this, using "pharmaka" and herbs to right great wrongs done against her. “Men make bad swine,” she muses.

It is through Circe’s turn at motherhood that Miller shows the most human side of a women overwhelmed by a baby that won’t stop crying, and reflecting on the love she bears her son. “I did not go easy into motherhood,” Circe conveys before the arrival of Telegonus, her child fathered by Odysseus. But she quickly becomes fiercely protective of him in a way at once surprisingly familiar and yet underscored by her godly strength. “...I used to make lists of all the things I would do to keep him safe. It was not much of a game, because the answer was always the same. Anything.”

Extremely engrossing, Miller’s renditions of the Greek myths are thrilling and impassioned, creating a delightful read.