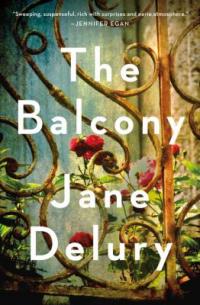 The Balcony * by Jane Delury,  a novel in 10 interconnected stories (some previously published), is a "breathtaking century-spanning portrait of the inhabitants of a French village, revealing the deception, despair, love, and longing beneath the calm surface of ordinary lives.” ~ Jennifer Egan.

Readers are first introduced to the Léger country estate just outside Paris in 1992, through the eyes of American au pair Brigitte who found herself falling for Hugo, a tortured academic who was about to take up a teaching position at an East Coast college.  The narratives came full circle in the last story when we meet Brigitte’s young charge as an adult. In between, we followed intimately a century of inhabitants of the manor and the servant’s cottages - from a courtesan who threw herself off the titular balcony; a Jewish couple in hiding from the Gestapo; to the village schoolmaster and a hero of the Resistance, who bullied his own family, while bearing witness to layers of family secrets and generations of human drama.

“In this sophisticated and impressive first novel, the author deftly ties together seemingly unrelated stories, ranging back and forth in time, while bringing each of her characters to vivid life.” (Library Journal)

Is there a chance to order…

Is there a chance to order this from Amazon? I am in the UK