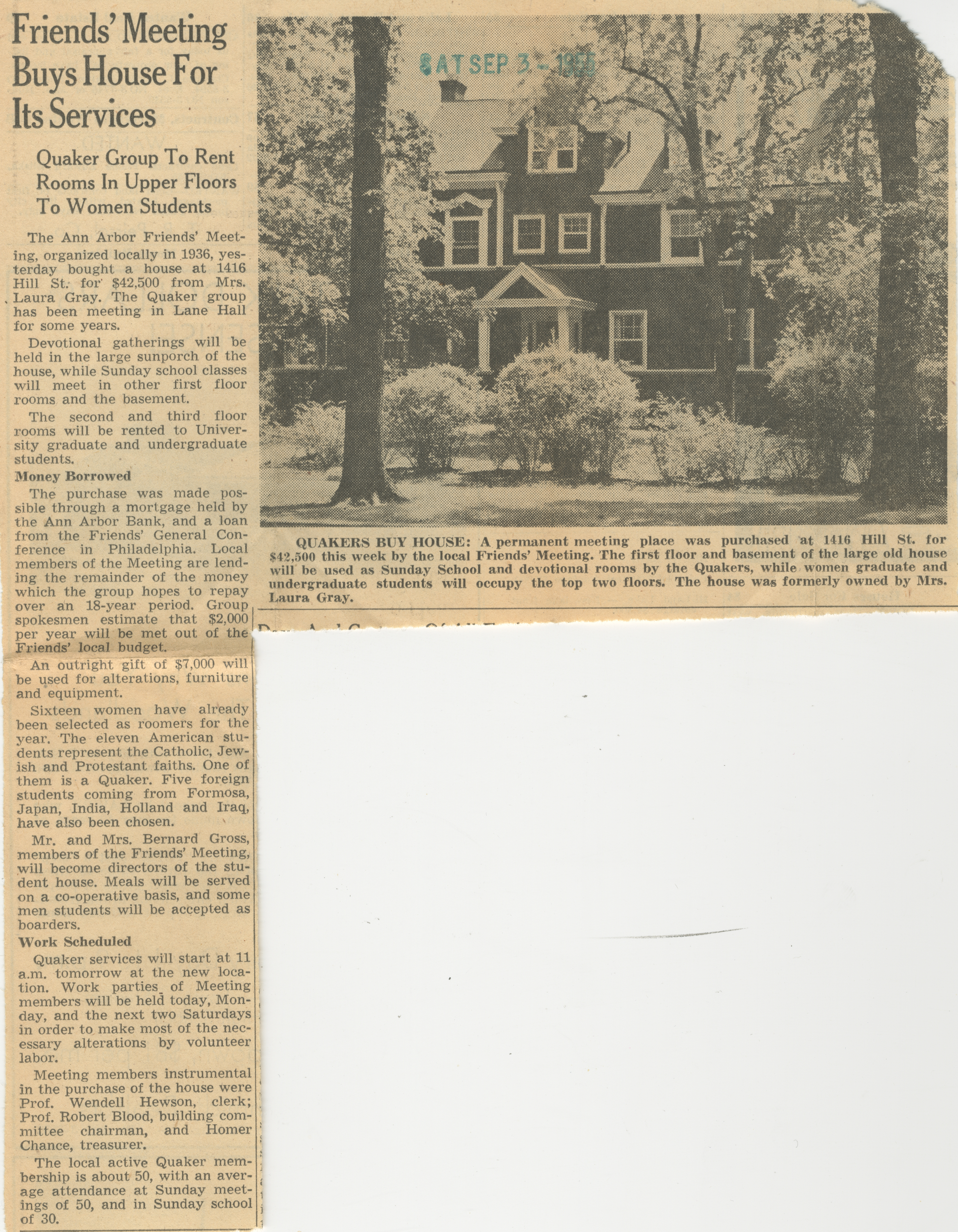 The Ann Arbor Friends’ Meeting, organized locally in 1936, yesterday bought a house at 1416 Hill St, for $42,500 from Mrs. Laura Gray. The Quaker group has been meeting in Lane Hall for some years.

Devotional gatherings will be held in the large sunporch of the house, while Sunday school classes will meet in other first floor rooms and the basement.

The second and third floor rooms will be rented to University graduate and undergraduate students.

The purchase was made possible through a mortgage held by the Ann Arbor Bank, and a loan from the Friends’ General Conference in Philadelphia. Local members of the Meeting are lending the remainder of the money which the group hopes to repay over an 18-year period. Group spokesmen estimate that $2,000 per year will be met out of the Friends’ local budget.

An outright gift of $7,000 will be used for alterations, furniture and equipment.

Sixteen women have already been selected as roomers for the year. The eleven American students represent the Catholic, Jewish and Protestant faiths. One of them is a Quaker. Five foreign students coming from Formosa, Japan, India, Holland and Iraq, have also been chosen.

Mr. and Mrs. Bernard Gross, members of the Friends’ Meeting, will become directors of the student house. Meals will be served on a co-operative basis, and some men students will be accepted as boarders.

Quaker services will start at 11 a.m. tomorrow at the new location. Work parties_ of Meeting members will be held today, Monday, and the next two Saturdays in order to make most of the necessary alterations by volunteer labor.

The local active Quaker membership is about 50, with an average attendance at Sunday meetings of 50, and in Sunday school of 30.

QUAKERS BUY HOUSE: A permanent meeting place was purchased at 1416 Hill St. for $42,500 this week by the local Friends’ Meeting. The first floor and basement of the large old house will be used as Sunday School and devotional rooms by the Quakers, while women graduate and undergraduate students will occupy the top two floors. The house was formerly owned by Mrs. Laura Gray.